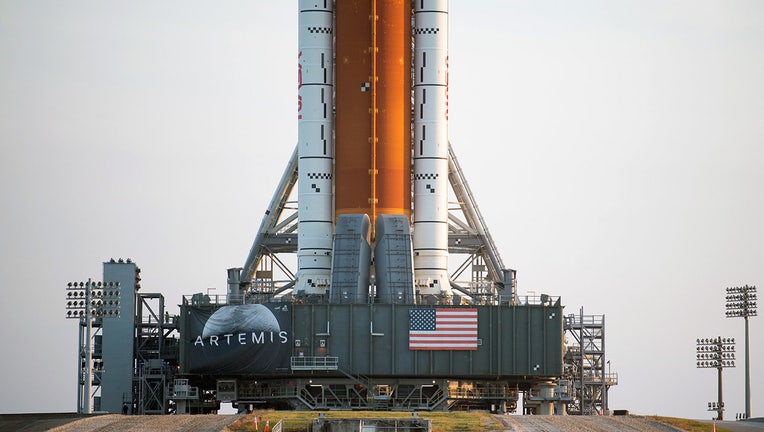 CAPE CANAVERAL, Fla. - The iconic red NASA "worm" logo, the bright orange fuel tank, and the sheer size of NASA’s new SLS rocket may be the first things most people notice. But a closer look reveals a striking pattern of black and white markings all over the giant rocket.

High-contrast lines and dots run up and down the length of the pencil-like solid rocket boosters while others pepper the engine area and ring the adapter near the Orion capsule. They’re part of a long history of unusual paint jobs that help engineers track their rockets in flight – a technique known as photogrammetry.

The very first V2 rockets in Germany had alternating black-and-white paint schemes specifically designed to allow observers to see how much the rockets were rolling as they lifted off. That trick continued through NASA’s rocket programs; everything from Alan Shepherd’s first Mercury-Redstone rocket to the mighty Saturn V moon rocket had black-and-white stripes or checkerboard patterns. 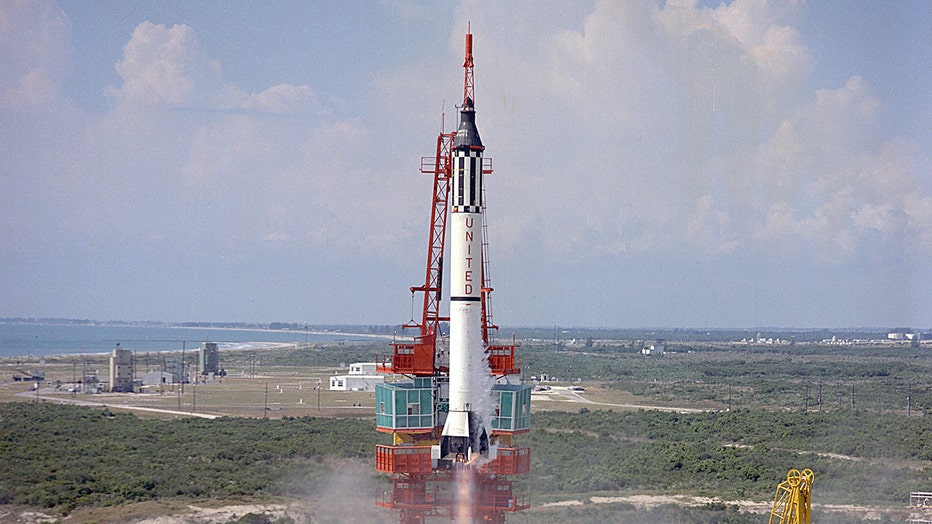 The space shuttle was an exception; NASA says such markings were not needed because of the airplane-like shape of the orbiter. But those old markings returned for the shuttle’s replacement – with one major difference.

While the paint schemes were originally designed for human eyes, finely tuned robotic cameras will help track the SLS rocket on its test flight. Most of those cameras are positioned around the launch pad, in some cases very tightly focused on one area; others are actually aboard the vehicle.

"The big squares will be used to measure general vehicle motion and ground clearances," explained David Melendrez, Orion’s lead for imagery integration at Johnson Space Center. "Smaller checkerboards and elongated markings will be used to measure more complicated three-dimensional motions of the boosters relative to the core stage during their separation, about two minutes into the spaceflight." 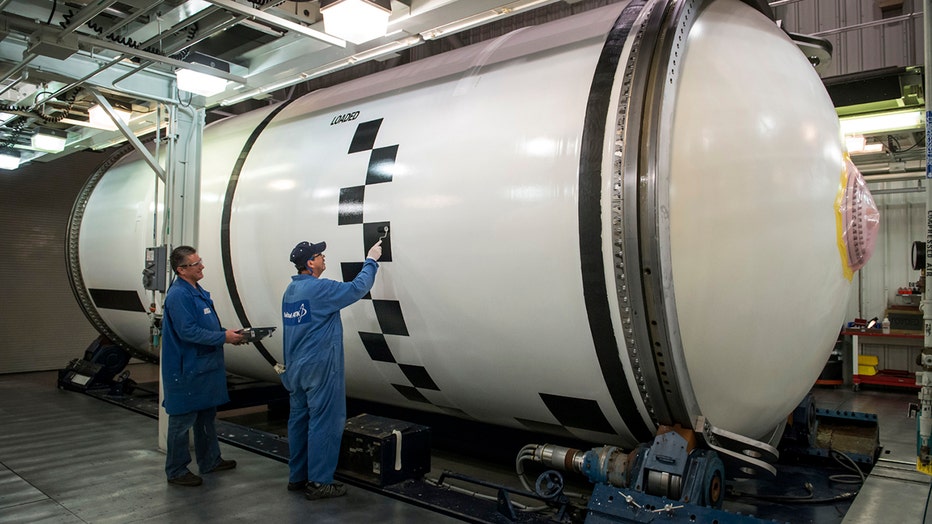 "Each marking has a specific purpose. In general, the markings are used to precisely measure motion during dynamic events during liftoff and separation," offered Beth St. Peter, the SLS imagery integration team lead for NASA’s Marshall Space Flight Center. "With specific cameras, we will track those cross-hairs of the markings and form ‘triangles’ of multiple patterns to help with our post-flight reconstruction analysis tasks."

That’s the NASA way of saying it will allow scientists and engineers to see how closely their computer simulations match the real thing.

"As accurate as those models are, photogrammetry will provide real-life ‘truth data’ on separation events and other key points. And for the first flight of SLS, gathering this real-world data on how the vehicle performs compared to the models is crucial," St. Peter said. 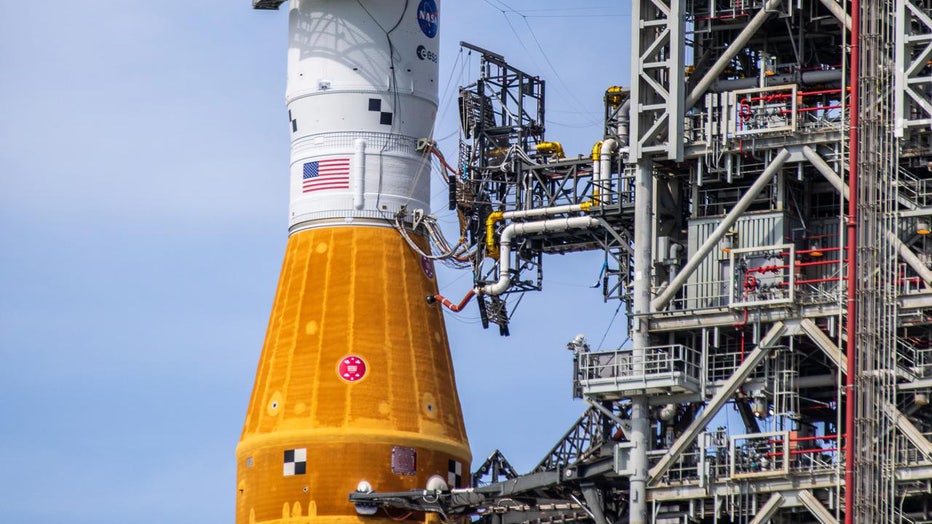 Engineers carefully consider placement of the markings to provide maximum value to the team while taking into account the thermal conditions they will experience during tanking and launch. (NASA photo / Ben Smegelsky)

With high-definition video, the sharply defined markings can be tracked down to the pixel to spot even the slightest variation in position.

During recent fueling tests, NASA said St. Peter’s team monitored the cameras to see how much stress the 730,000 gallons of supercold fuel had on the structure of the rocket.

More distant events, like stage separation, will be tracked with reflectors that work better in the unusual lighting conditions of the edge of space. 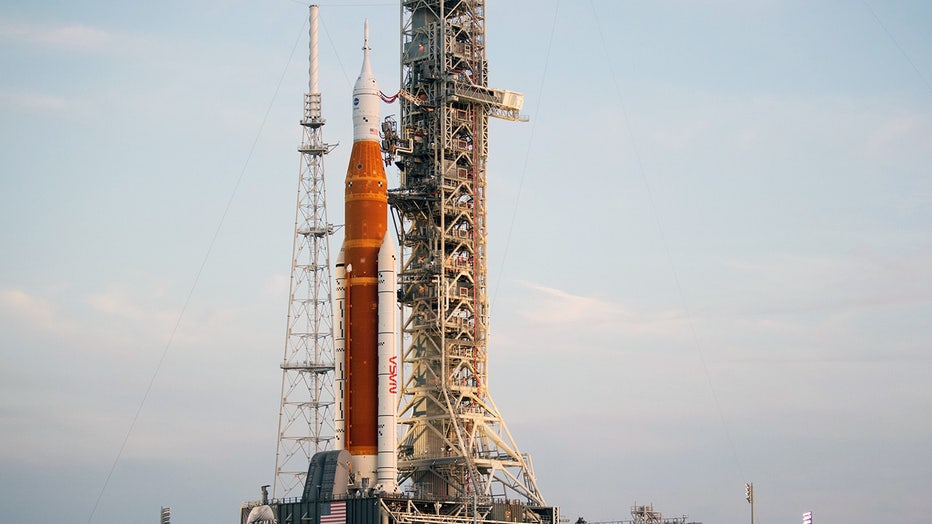 NASA’s Space Launch System (SLS) rocket with the Orion spacecraft aboard is seen atop the mobile launcher as it is rolled up the ramp at Launch Pad 39B, Wednesday, Aug. 17, 2022, at NASA’s Kennedy Space Center in Florida. (NASA photo / Joel Kowsky)

The SLS (Space Launch System) rocket is scheduled to make its first flight late this month on the Artemis I mission. It will launch an uncrewed Orion capsule around the moon in a dry run for a future crewed mission.

NASA hopes to send humans back to the lunar surface by 2025.