The Army says it has fired or suspended 14 officers and enlisted soldiers after an investigation into soldier safety and well-being at Fort Hood.

KILLEEN, Texas - The Army says it has fired or suspended 14 officers and enlisted soldiers after an investigation into soldier safety and well-being at Fort Hood. The investigation was sparked by the death of Specialist Vanessa Guillen as well as several other soldiers on post.

The Associated Press says that two general officers are among those being removed from their jobs.

The Army is  also ordering policy changes to address chronic leadership failures at the base that contributed to a widespread pattern of violence including murder, sexual assaults, and harassment. The changes, firings, and suspensions were discussed at a news conference from Ft. Hood this afternoon.

The Army says it has fired or suspended 14 officers and enlisted soldiers after an investigation into soldier safety and well-being at Fort Hood. It's also making other policy changes.

A five-person expert committee was formed to look into the climate and culture both on and off post. As part of the Operation People First initiative, the committee visited post from late August through mid-September. That followed a number of reports from both male and female soldiers describing bullying and a culture of sexual harassment at Ft. Hood.

After the death of Guillen, Guillen's family said she had told friends and fellow soldiers that she had been sexually harassed although formal complaints were never filed.

Fort Hood has some of the

Of all the United States Army posts, Fort Hood has the most sexual assaults and murders.

RELATED: Army: Fort Hood has some of the "highest numbers" of violent acts, sexual harassment cases

Several other soldiers have also been found dead at or near Ft. Hood and families say the communication between officials and the Killeen Police Department has been lacking.

Under the Operation People First initiative, Ft. Hood says there will be more responsibility and accountability.

Lawmakers introduce ‘I Am Vanessa Guillen

The bill has support from both Democrats and Republicans and aims to help military members report instances of sexual abuse or harassment without fear or retaliation along the chain of command. FOX 7 Austin's Jane Lonsdale has details.

WHY IS AN INDEPENDENT REVIEW BEING CONDUCTED?

On July 10, the U.S. Army Public Affairs announced the review after Army Secy. Ryan D. McCarthy met with members of the League of United Latin American Citizens (LULAC) and two members of Congress to discuss the murder of Specialist Vanessa Guillen and issues raised during the investigation into her death.

The announcement came after U.S. Rep. Sylvia Garcia signed a letter with 87 other Congressional members in support of U.S Senator Kristen Gillibrand and Rep. Jackie Speier calling for an independent investigation by the Department of Defense into the circumstances surrounding Guillen's death including allegations of sexual harassment.

The delegation of eight U.S. Representatives visited Fort Hood Friday to perform their oversight role in the wake of a number of concerning events involving the military installation, including the murder of Spc. Vanessa Guillen.

WHO IS VANESSA GUILLEN?

20-year old Specialist Guillen was last seen on the morning of April 22 in the parking lot of her Regimental Engineer Squadron Headquarters, 3rd Cavalry Regiment on Fort Hood and had not been heard from since. 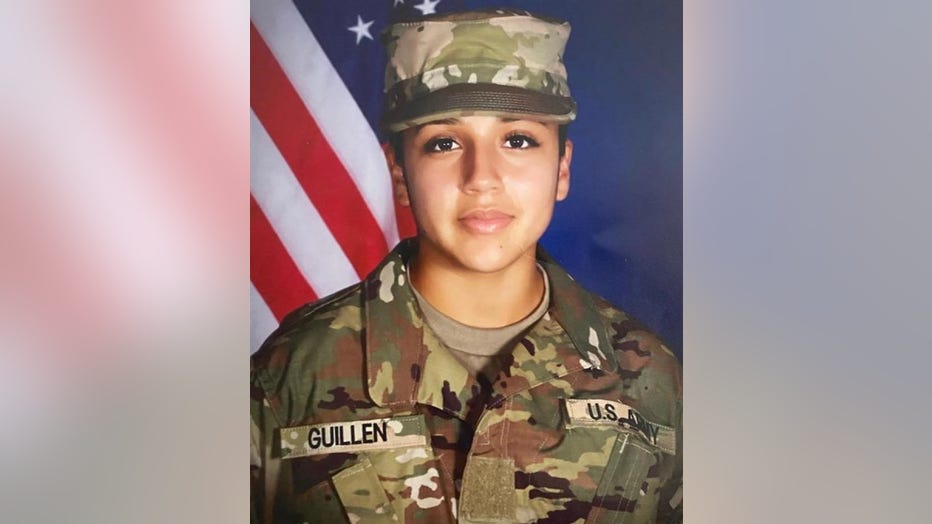 22-year-old Cecily Aguilar, who officials say is the estranged wife of a former Fort Hood soldier, was arrested and a federal grand jury has indicted Aguilar in connection to Guillen's disappearance.

Court records allege that Aguilar conspired with her boyfriend, U.S. Army Spc Aaron Robinson, to corruptly alter, destroy, mutilate and conceal evidence, including Guillen's body in order to prevent Robinson from being charged with and prosecuted for any crime.

Robinson committed suicide on July 1 as authorities closed in on him.

Wedel-Morales was last seen driving his personal vehicle outside of Fort Hood in Killeen on the night of August 19, 2019 and his last known contact was the following day. He was listed as AWOL on August 20, 2019 and his family says he told them he was slated to exit the Army on September 10, 2019.

Wedel-Morales, 24, a native of Sapulpa, Okla., was last seen driving his personal vehicle outside of Fort Hood in Killeen on the night of Aug. 19, 2019.

In June 2020, the remains of Wedel-Morales were found in a field in Killeen. Officials said that foul play is suspected.

In July 2020, Fort Hood announced that Wedel-Morales had been reinstated to active duty and was no longer listed as a deserter. The change in status entitles him to burial with full military honors. The mother of Wedel-Morales says the change was made after the Killeen Police Department found new evidence indicating her son had died before he was "dropped from rolls" or deemed a deserter.