The only memorial to Holocaust victim Anne Frank in the U.S. was plastered with stickers depicting a swastika.

BOISE, Idaho - The United States' only memorial to Holocaust victim Anne Frank was plastered with stickers depicting a swastika, a symbol appropriated by the Third Reich during the World War II era and used by white supremacists.

The Anne Frank Human Rights Memorial, located in Boise, Idaho, includes a life-sized bronze statue of the Jewish diarist. It shows Frank holding her diary and looking out the window of the "secret annex" in which she and her family spent 761 days hiding from German Nazis. 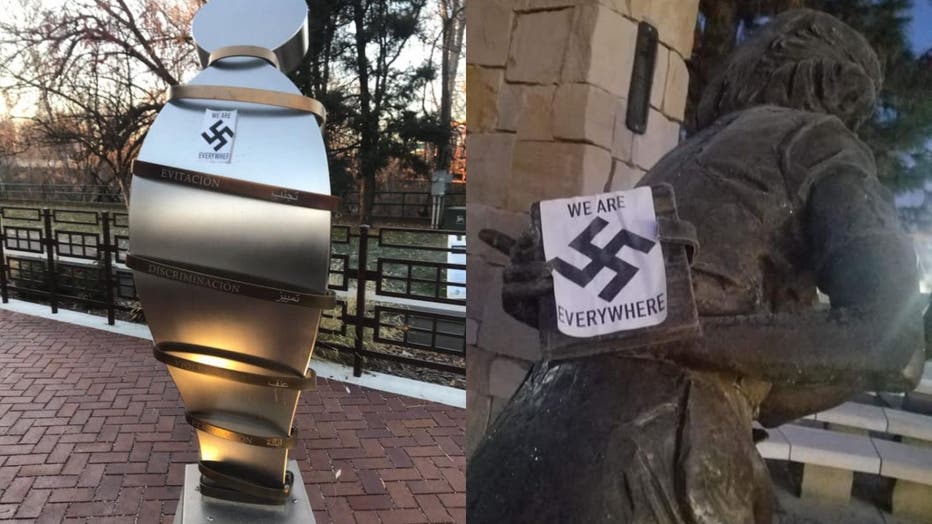 The Franks were discovered and taken to concentration camps in August of 1944 -- just a year before the end of World War II.

The swastika stickers were put both on the diary, accompanied by the words "we are everywhere," and on a statue representing the “spiral of injustice."

According to USA Today, the spiral of injustice represents how hateful rhetoric can escalate to violence.

The memorial is maintained by the Wassmuth Center for Human Rights, and another sticker was pasted over a photo of namesake Bill Wassmuth, a Catholic priest who left the priesthood to focus on fighting white supremacy. He died in 2002.

The incident -- which was first discovered by a visitor -- has prompted an investigation by Boise police.

Police Chief Ryan Lee said the act was "absolutely reprehensible," noting officers had reached out to the Anti-Defamation League during their inquiry.

“It does cause us concern,” he told reporters. “We are committed to ferreting out … those who would foment hate in the community.”

This is not the first time the memorial has been vandalized. In 2017, anti-Semitic and racist graffiti at the center caused $20,000 in damage.

The Wassmuth Center is reportedly raising money to install a security system on site.

The community has rallied around the memorial this week -- just days before the Jewish celebration of Hanukkah --  in defiance of the vandalism, laying flowers and notes at Frank's statue.

The Wassmuth Center tweeted on Wednesday that while some people had suggested holding a vigil in the memorial, officials "are asking that we stand together to confront hate - BUT NOT physically stand together in the Memorial."

"We have to remind people that good people are everywhere, that good exists, and now is the time for good to come together," said Prinzing.