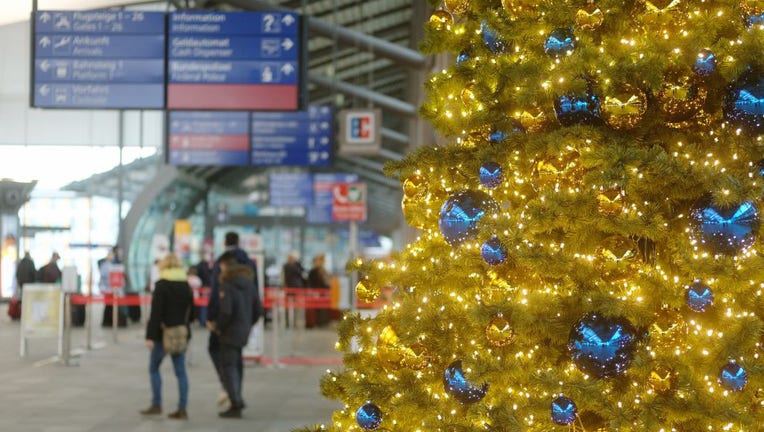 FILE - A Christmas tree stands in a terminal at Leipzig-Halle Airport on Dec. 23, 2021, in Schkeuditz, Saxony, Germany. (Photo by Sebastian Willnow/picture alliance via Getty Images)

Inflation has sent U.S. consumer prices soaring for groceries, gas, and many other goods and services. It’s also potentially having an impact on the cost of Christmas trees — and now Americans’ travel plans over the holidays.

Out of the 43% of U.S. adults planning to travel over the holiday season, nearly eight in 10 of those travelers are changing their plans due to rising prices, according to a recent survey conducted by the personal finance website Bankrate.

The most popular money-saving tactics include traveling for fewer days (26%), participating in less expensive activities (25%), and choosing cheaper accommodations and destinations for the holidays (25%), the survey found.

The online survey, conducted between Sept. 7 and Sept. 9, included 2,455 adults.

RELATED: 1 in 5 Americans dating less because of inflation

Across industries and households, U.S. inflation remains a heavy burden. While gas and cheaper used cars slowed consumer prices in August, many other items rose in price.

High inflation has also kept pressure on the Federal Reserve, the agency tasked with keeping prices stable. Last month, the Fed raised its key interest rate by a substantial three-quarters of a point for a third straight time, leading to higher costs for many consumer and business loans.

Inflation primarily impacts people who earn less. An August Gallup poll found that 74% of lower-income Americans have experienced severe or moderate financial hardship, compared to 56% of the population as a whole.

Its survey found that 84% of holiday travelers with an annual household income under $50,000 were changing their plans due to inflation and rising pricing.

Meanwhile, younger people in the survey were more likely to change holiday travel plans because of costs, with 82% of GenZers and Millennials each saying they were doing so.

"If you want to maximize attendance at holiday festivities this year, consider gathering near your youngest family members to eliminate some of the financial strain on those most likely to experience it," Bankrate stated in its report.