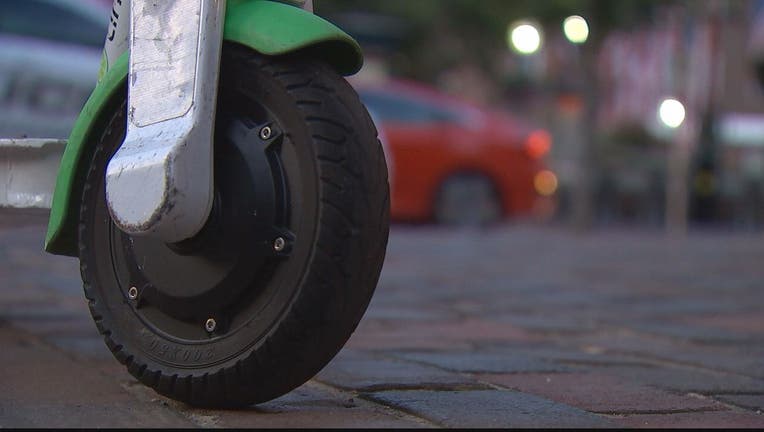 ALEXANDRIA, Va. - Dockless scooters are popping up across the DMV, from Alexandria to Arlington and Washington D.C., but as the technology takes over the roadways, local police departments are having to adapt.

If you hop on an e-scooter in the City of Alexandria, police say, they’ve got their eye on you!  After a series of crashes and citizen complaints, the police department is targeting reckless riders.

Lt. Courtney Ballantine says they’re focusing on violations including, “Being on the sidewalk, leaving them in the middle of the sidewalk, also stop sign violations, they scoot in and out of traffic.”

Dockless scooters are popping up across the DMV, from Alexandria to Arlington and Washington D.C., but as the technology takes over the roadways, local police departments are having to adapt.

Months into the City of Alexandria’s e-scooter pilot program, residents and visitors have taken 101,515 rides with 7 injuries and 324 complaints.

Lt. Ballantine says, “We’ve had a couple accidents that caused significant injuries.  All non-life threatening, but at the end of the day, it’s a big deal, you need to be safe about it.”

He’s reminding users that e-scooters are a motor vehicle, so it’s illegal to ride them on the sidewalk and you must follow stop signs, lights and the rules of the road.  He says, if you put your safety, or the safety of others at risk, don’t be surprised if you get a ticket.

The department even conducted a stationary traffic post to warn riders and issue violations on the popular King Street corridor in Old Town.

The targeted patrol comes as the City launches an online survey to gather input ahead of their November discussion on the issue.

Mayor Justin Wilson agrees with residents that there are many issues needing to be addressed. “We had a lot of concerns around where they’re left, and accessibility, aesthetics, people riding on sidewalks, risk to pedestrians, things like that.”

In November, the Mayor and City Council will decide whether to cancel the pilot program, extend it or make it permanent, along with any conditions they’d like to impose.  Some options include geo-fencing and corrals such as those already in place for Capital Bikeshare.

Wilson explains, “It’s like food trucks, Uber and Lyft, like AirBNB, these new technologies disrupt and we in the local government have to catch up.”

Wilson says, the City of Alexandria is also looking to Arlington and the District for guidance.

FOX 5 DC reached out to both police departments.  Arlington tells us, it does not conduct targeted e-scooter patrols.  DC police did not specifically respond to our question.