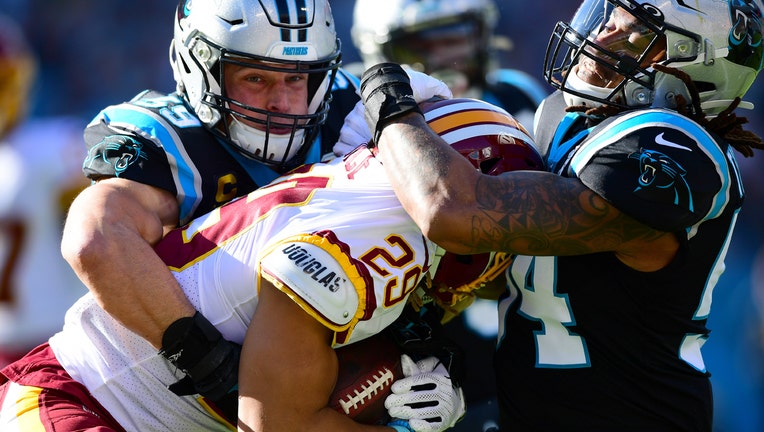 Luke Kuechly #59 and Shaq Thompson #54 of the Carolina Panthers bring down Derrius Guice #29 of the Washington Redskins during the first quarter during their game at Bank of America Stadium on December 01, 2019 in Charlotte, North Carolina. (Photo by

CHARLOTTE, N.C. - A breakout performance by Redskins running back Derrius Guice led the Burgundy and Gold to a win Sunday at Carolina.

Guice only needed 10 carries to gash the Panthers for a career-high 129 yards and two touchdowns. The performance was the first 100-yard game for the second-year back, who also scored the first rushing touchdowns of his career Sunday.

Veteran back Adrian Peterson added another 99 yards and a touchdown in the win, which was the Redskins' third of the season. The final score was 29-21. The game was unexpectedly close in the final minutes after Carolina recovered an onside kick and drove down the field to nearly tie the game.

Believe it or not, the once hapless Redskins are now working on a winning streak after beating the Detroit Lions last week. The Skins now figure to be a late-season spoiler for the Packers, Eagles and Cowboys, who all are still in the NFC playoff chase. That's despite many Redskins fans now hoping for a high draft pick, and reports that Dan Snyder is contemplating a "complete evaluation" of the franchise, including the future of longtime President Bruce Allen.

The Redskins travel to Lambeau Field to play the Green Bay Packers at 1 p.m. next Sunday. Watch the game on Fox 5 and be sure to catch Redskins Game Time at 7:30 a.m. every Sunday for pregame analysis throughout the season.