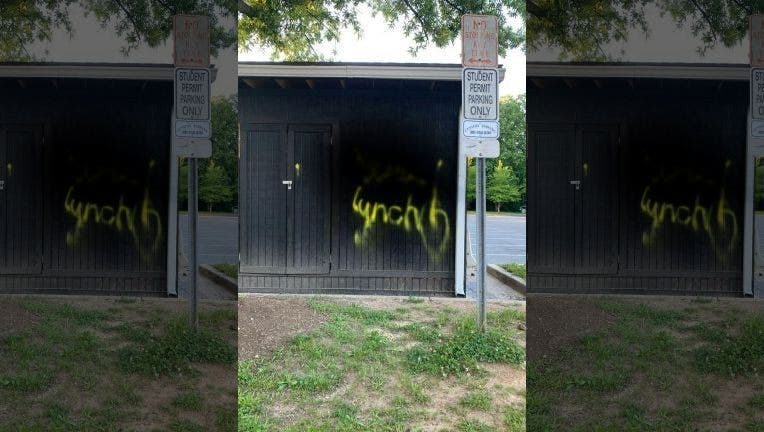 Racist graffiti including the N-word, a noose and the word "lynch" was found on the campus of Walt Whitman High School in Bethesda. FOX 5 has altered the image for publication.

According to police, on the morning of Saturday, June 13, an officer was on patrol when a resident alerted them to racist words and an image spray-painted on property belonging to Walt Whitman High School in Bethesda.

Police say on June 14, 18-year Jake Foster Hoffman and an unidentified 17-year-old boy, who were both accompanied by a parent, went to the police station in the 2nd District to discuss the vandalism with officers.

While there, the 17-year-old boy told police "he committed this racially-themed vandalism because he thought it would be fun to have something make the news given the current events occurring in the United States."

Police say Hoffman and the 17-year-old also said "they felt regret soon after the vandalism and that they wanted to turn themselves in."

During an investigation, police determined another unidentified 17-year-old boy "suggested to the first juvenile male suspect that if he wanted to commit a racially-themed vandalism to the school that he should do it to the front of the school."

Hoffman also said to police that he told the first juvenile male that he should vandalize the utility shed instead of the front of the school.

On March 1, police say similar racist graffitti was found at the high school and the second 17-year-old boy admitted to committing that act of vandalism.

Hoffman was charged via District Court Summons with conspiracy to commit destruction of property.

Whitman Principal Robert W. Dodd told parents Saturday morning that the school had covered up the graffiti and contacted the police.

"I want to emphasize as strongly as possible that this racist and destructive behavior will not be tolerated in the Walt Whitman High School community," Dodd wrote in an email to parents. "If it is discovered that our students were involved, they will receive serious consequences and may face additional charges from Montgomery County Police."

The image at Walt Whitman High School includes the N-word, the word "lynch" and the drawing of a noose. FOX 5 has removed the vulgarity for publication online.