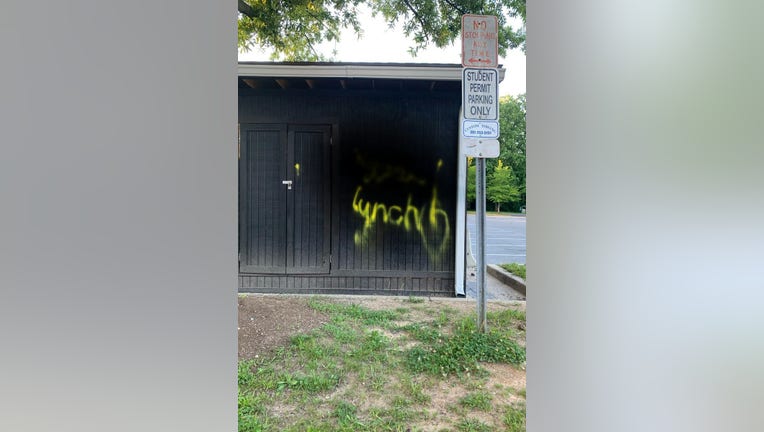 Racist graffiti including the N-word, a noose and the word "lynch" was found on the campus of Walt Whitman High School in Bethesda. FOX 5 has altered the image for publication.

BETHESDA, Md. - For the second time in four months, a Bethesda high school is cleaning up racist graffiti spray-painted on its campus.

The image at Walt Whitman High School includes the N-word, the word "lynch" and the drawing of a noose. FOX 5 has removed the vulgarity for publication online.

Whitman Principal Robert W. Dodd told parents Saturday morning that the school has since covered up the graffiti and contacted the police.

He added the message was "very similar" to racist graffiti found on campus in late February.

"I want to emphasize as strongly as possible that this racist and destructive behavior will not be tolerated in the Walt Whitman High School community," Dodd wrote in an email to parents. "If it is discovered that our students were involved, they will receive serious consequences and may face additional charges from Montgomery County Police."

President Trump late Friday announced he would reschedule his first campaign rally in months out of respect for Juneteenth, or the anniversary of African American Emancipation. The decision came after outrage from Black leaders.

Dodd, meanwhile, told Walt Whitman parents that the school remains "steadfast" in its mission to build a safe and inclusive community on campus.

"While I’m deeply discouraged by what occurred today, it will not deter us from our collective mission to end racism and build a safe and inclusive school community where ALL students can thrive," Dodd wrote.