The most memorable Super Bowl ads this year

This year’s Super Bowl was certainly not a politics-free zone, as both President Donald Trump and Democratic presidential candidate Michael Bloomberg aired campaign ads during the game.

MIAMI GARDENS, Fla. - 2020’s super bowl ads had the laughs, the tears and the news. Here are some of the commercial highlights.

Patriots fans waited with bated breath for a Hulu ad that followed a cryptic tweet from quarterback Tom Brady announcing his future in the NFL following his free agency that will take place in March.

“I’m not going anywhere,” said the six-time Super Bowl champion in an ad for the streaming service pitching its Hulu + Live TV offering.

This year’s Super Bowl was certainly not a politics-free zone, as both President Donald Trump and Democratic presidential candidate Michael Bloomberg aired campaign ads during the game.

Google’s 90-second ad is one of the few commercials this year that doesn’t use humor or celebrities. It features a man reminiscing about his wife, using the Google Assistant feature to pull up old photos of her and past vacations. The ad is set to an instrumental version of “Say Something” by Great Big World.

In a tongue-in-cheek nod to unsatisfied “Game of Thrones“ fans regarding the final season of the HBO fantasy epic, actress Maisie Williams clears her pipes with a rendition of “Let it Go” from Disney’s “Frozen” in an ad for Audi.

MC Hammer returned to celebrate the 30th anniversary of “U Can’t Touch This” in an ad for Cheetos. The commercial features a man with fingers covered in Cheeto dust which humorously prevents him from completing various tasks.

Doritos is betting people will connect with “Old Town Road,” the smash hit of the summer by Lil Nas X. In the western-themed ad, Lil Nas has a dance off with grizzled character actor Sam Elliott. Billy Cyrus, who features in the song’s remix, also makes a cameo.

In a callback to when American soccer champion Carli Lloyd kicked a 55-yard field goal at the Philadelphia Eagles practice last year, Secret Deodorant released an ad sparking a conversation about women and their role in sports today.

The ad features a tense moment with a football team down a single point as the kicker goes for a field goal attempt in the final seconds to win the game.

Fans pause their cheering as the mysterious kicker is revealed to be Lloyd.

“More than two-thirds of girls believe that society doesn’t encourage women to play sports so we are setting out to change this notion by spotlighting fierce female athletes – specifically two major women’s soccer players – in ‘The Secret Kicker,’ which is aimed at defying conventional expectations and championing equal opportunities for women,” writes Secret Deodorant on their YouTube page. 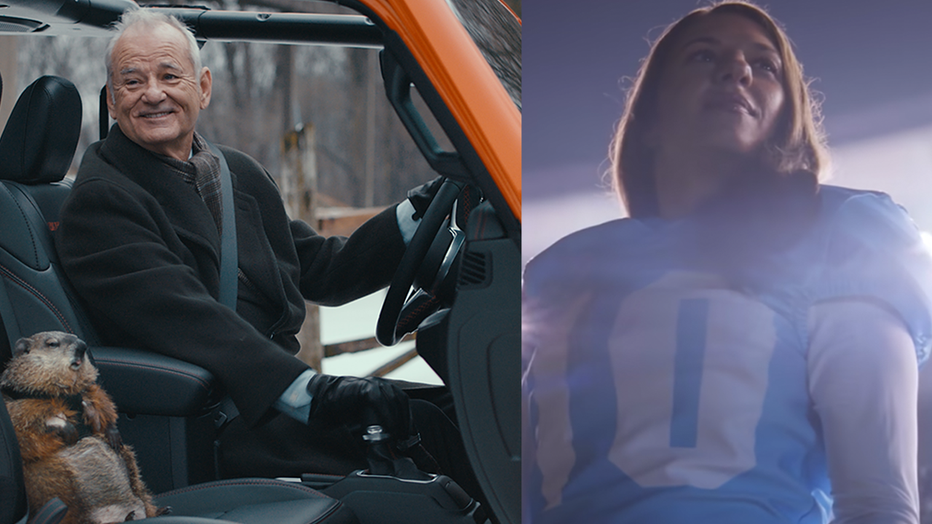 Bill Murray in a Jeep ad next to Carli Llloyd featured in a Secret Deodorant ad.

The ad features a flustered Murray driving in a Jeep Gladiator while reliving the same day over and over again. The slogan for the ad, humorously, is “no day is the same in a jeep Gladiator.”

The Associated Press contributed to this story. This story was reported in Los Angeles. This station is owned by the FOX Corporation.