A 15-year-old Ukrainian boy is being hailed as a hero after he reportedly helped pinpoint Russian forces using his drone which allowed Ukrainian troops to defeat the oncoming enemy convoy, according to Global News.

Andrii Pokrasa claimed he was the civilian tasked with using his drone to stop Russian forces from invading Kyiv, Ukraine’s capital.

"He was the only one who was experienced with drones in that region," Yurii Kasjanov, commander of Ukraine’s armed forces unmanned reconnaissance section, told Global News. "He’s a real hero, a hero of Ukraine."

Pokrasa told Global News that executing the mission was "very, very scary" but the idea of Russian troops overtaking his home was a far scarier prospect.

"They provided us information where approximately the Russian column could be. Our goal was to find the exact coordinates and provide the coordinates to the soldiers," Pokrasa told Global News. "It was one of the biggest columns that was moving on the Zhytomyr road and we managed to find it because one of the trucks turned on its lights for a long time."

With the help of his father, Pokrasa was able to locate the Russian convoy and his father relayed the coordinates to Ukrainian troops on the ground using a social media app, Global News reported.

Ukrainian forces were able to stop the invading Russian troops near Berezivka, a city just over 24 miles from Kyiv. 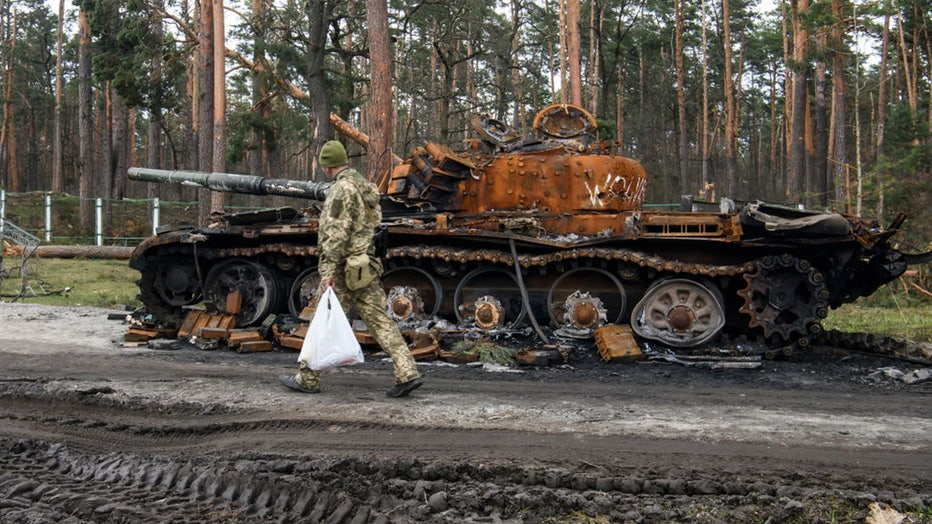 Pokrasa and his family have since relocated to Poland where he was able to finish ninth grade, according to Global News.

When asked what his peers thought about his heroic endeavor to thwart one of the strongest armies in the world, Pokrasa replied, "They’re not really the strongest army," Global News reported.

Small but mighty: Ukraine forces refuse to back down

While Russia has superior firepower, the Ukrainian defenders are entrenched and have shown the ability to counterattack.

Ukrainian President Volodymyr Zelenskyy said no significant advances were made in the eastern Donbas region over the past day.

After abandoning its bungled attempt to storm Kyiv two months ago, Russia declared that taking the entire Donbas is its main objective.

"The absolutely heroic defense of the Donbas continues," he said in his nightly Tuesday video address.

Zelenskyy said the Russians clearly did not expect to meet so much resistance and are now trying to bring in additional troops and equipment.

Top diplomats from NATO met in Berlin with the alliance’s chief this past May, who declared that the war "is not going as Moscow had planned."

"Ukraine can win this war," NATO Secretary-General Jens Stoltenberg said, adding that the alliance must continue to offer military support to Kyiv.

Ukraine said it held off Russian offensives in the east, and Western military officials said the campaign Moscow launched there after its forces failed to seize Kyiv, has slowed to a snail’s pace.

Russia and Ukraine are engaging in electronic warfare

Electronic warfare technology targets communications, navigation and guidance systems to locate, blind and deceive the enemy and direct lethal blows. It is used against artillery, fighter jets, cruise missiles, drones and more. Militaries also use it to protect their forces.

It has become far more of a factor in fierce fighting in eastern Ukraine, where shorter, easier-to-defend supply lines let Russia move electronic warfare gear closer to the battlefield.

"They are jamming everything their systems can reach," said an official of Aerorozvidka, a reconnaissance team of Ukrainian unmanned aerial vehicle tinkerers, who spoke on the condition of anonymity because of safety concerns. "We can’t say they dominate, but they hinder us greatly."

Its own electronic warfare capability is hard to assess. Analysts say it has markedly improved since 2014 when Russia seized Crimea and instigated a separatist revolt in eastern Ukraine. But there are setbacks. Last week, Russia claimed it destroyed a Ukrainian electronic intelligence center in the southeastern town of Dniprovske. The claim could not be independently confirmed, and Ukrainian officials did not respond to a request for comment.

Ukraine has also made effective use of technology and intelligence from the United States and other NATO members. Such information helped Ukraine sink the battle cruiser Moskva. Allied satellites and surveillance aircraft help from nearby skies, as does billionaire Elon Musk’s Starlink satellite communications network.