WASHINGTON - Despite the relatively low snowfall total for Washington, D.C. so far this winter, as only 3.8" of snow has fallen to date, it has been a very active second half of the winter in terms of the number of winter storms. Winter storm watches are expected to be issued for parts of our region later this afternoon for the third time in just the last two weeks. MOBILE USERS -- CLICK HERE TO WATCH LIVE

Mike Thomas has the FOX 5 Weather forecast for Wednesday, February 10 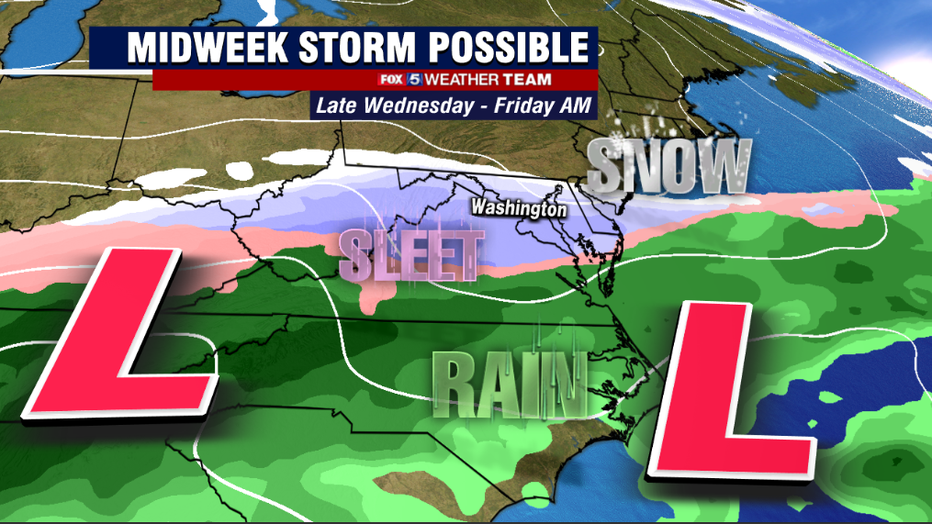 These types of winter storms have been anything but easy when it comes to the forecast though. Every storm the immediate DC area has dealt with this season has features some type of mix or even rain cutting back on local snowfall totals.

This next event is no different in that regard, as it will have its difficulties that we have to work through when it comes to the forecast. 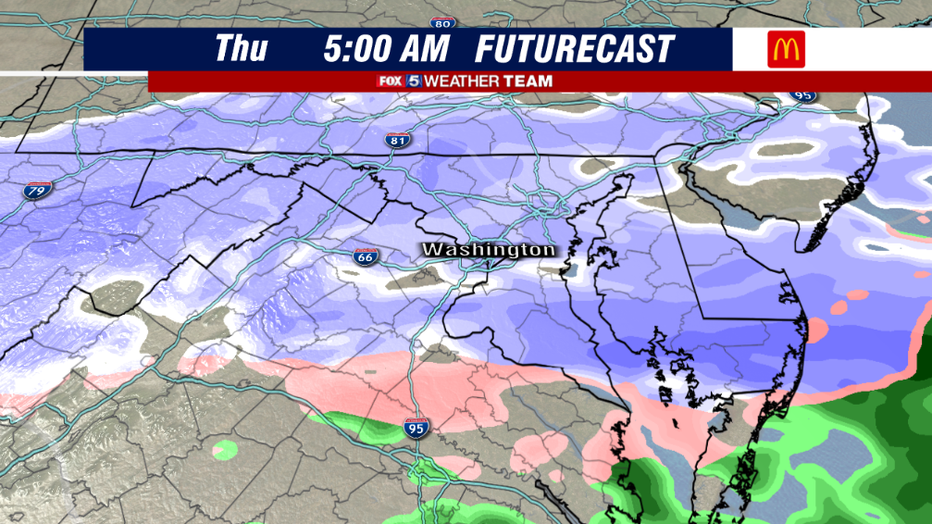 The first portion of the snow event is expected to begin late on Wednesday night. Light snow is expected to overspread the region from west to east throughout the late evening and overnight hours. Best chances here in Washington will be sometime after 10pm in the evening.

Snow is expected to be steady, but light, and with ground temperatures marginally cold it may take some time to stick. One of the keys to this system that I want to make perfectly clear from the onset is that I am not expecting too much accumulation with the first wave Wednesday night into Thursday morning.

Perhaps a few inches, little more in the northwest zones where ground temperatures will be colder and snow will stick faster, but by dawn on Thursday I am not really expecting anyone to have a considerable amount of snow. 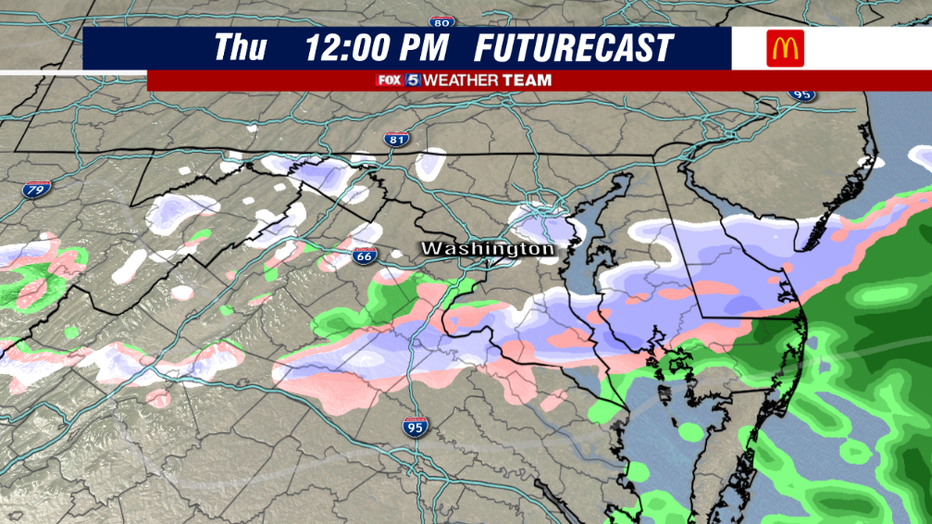 Thursday afternoon is where things get a little tricky. Most of our weather model guidance as of this morning is scattering out the snow, mixing in with some sleet and rain in some spots while other dry out completely.

This is the time frame where many will think that the storm is done. We are expecting very little if any additional snow accumulations as things stand right now on Thursday afternoon. It may give folks a little bit of a false sense of security as the second part of the event gets underway. 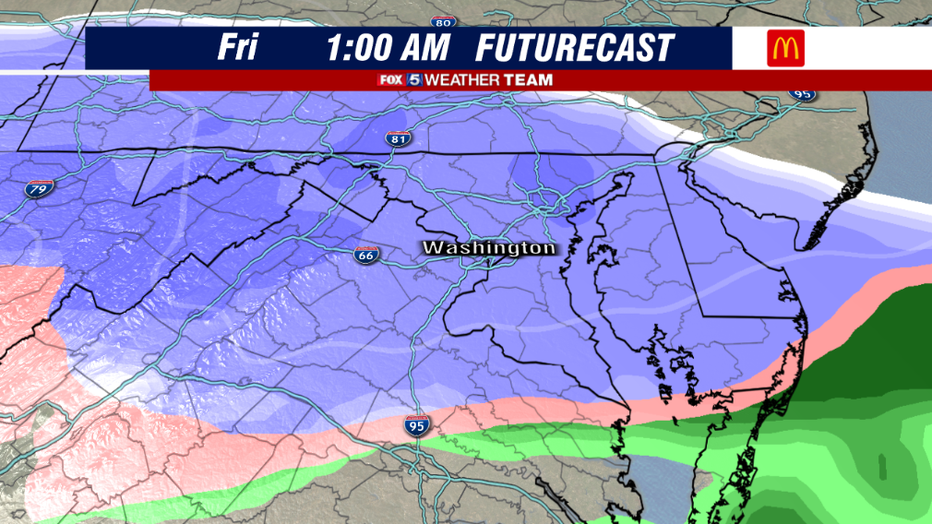 Similar to the first wave, the second wave should move in later on Thursday night into the pre-dawn hours of Friday. Of the two parts of this storm, it is this second wave that has more moisture with it, and therefore the threat for heavier and steadier snows and greater accumulation potential.

Models so differ on where the axis of heaviest snow will be though. Some focusing in western portions of Virginia, while others are focused in northern Maryland.

Regardless of where it sets up, snow is expected to continue right on through the morning commute hours of Friday, before the system wraps up and exits our region on Friday afternoon. 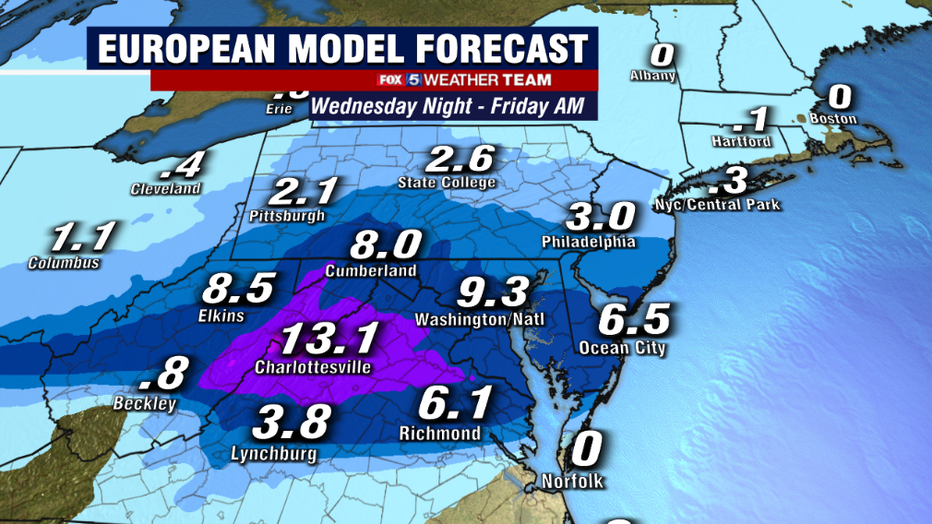 As for how much snow our region could potentially see, models are once again being rather aggressive with snowfall totals.

The European model, typically one of the more accurate weather models, shows up to 9" of snow here in Washington by the time the system moves out on Friday.

We should note however that for everything it is, the European has struggled so far this winter season here in DC, often showing more snow than we actually receive. So please take these numbers with a little bit of a grain of salt. 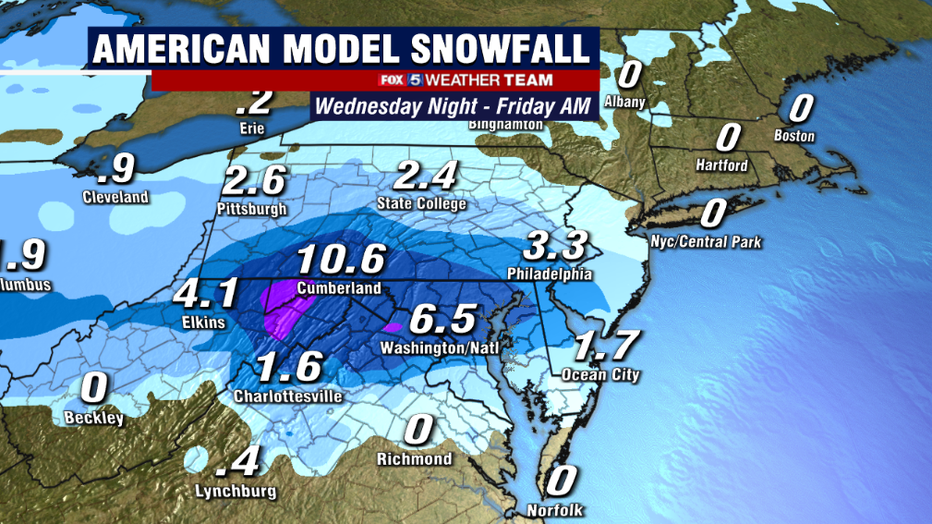 Its competitor, the American model, is a little less on the totals here in DC and shows considerably less snow and more mix for the southern zones, while a good deal more for the northwest zones. As mentioned earlier, it all depends on where the axis of heaviest precipitation sets up in our region. Those details will still need to be worked out in the days ahead.

This storm system certainly has the potential to be one of the more impactful on our region so far this winter. Keep it tuned to Fox 5 for the latest from your Fox 5 Weather Team working tirelessly to keep you ahead of the storm.