WASHINGTON (FOX 5 DC) - The D.C. area dodged a bit of a bullet Monday night as temperatures remained about 5° too warm for anything other than plain old rain here in Washington.

Freezing rain and ice were mostly confined to the mountain regions. Moisture was plentiful though – most locations picked up over a half-inch of rain Monday night. This was enough to set a daily record at Dulles. 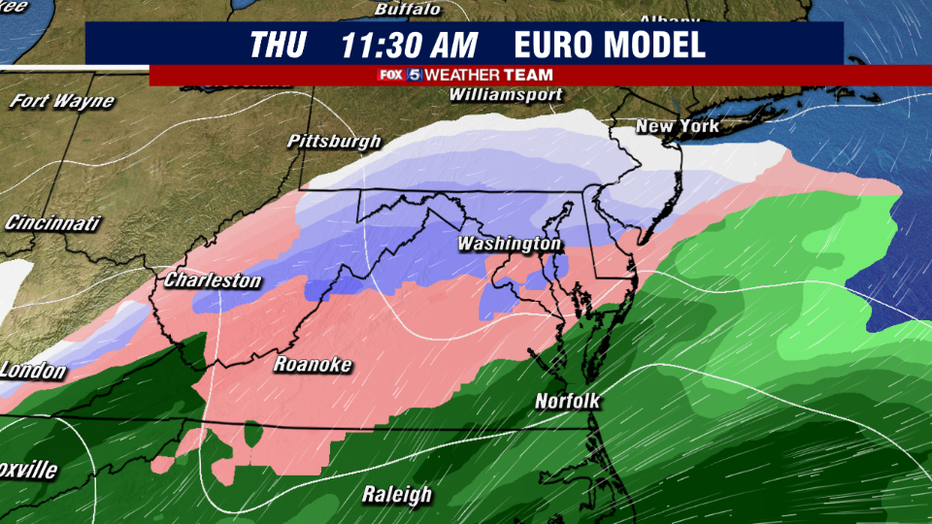 Despite the dreary start, today should actually be one of the nicer days of the week by the afternoon with temperatures expected to reach the 50s.

The cold will return overnight though, with temperatures Wednesday morning likely starting off in the 30s. Clouds will build throughout the day, though Wednesday is expected to pass dry here in Washington.

We will keep a close eye on temperatures though, as they will be key as moisture starts to approach the D.C. region on Thursday morning.

Latest-model projections show snow overtaking the D.C. region starting a few hours before sunrise, mostly focused to areas northwest of the I-95 and areas north of I-66.

There is the potential for a couple of inches of light snow to pile up around D.C. during the morning commute that could make it quite tricky. Areas to the south and east are more than likely to see things start off as more of a mixture. 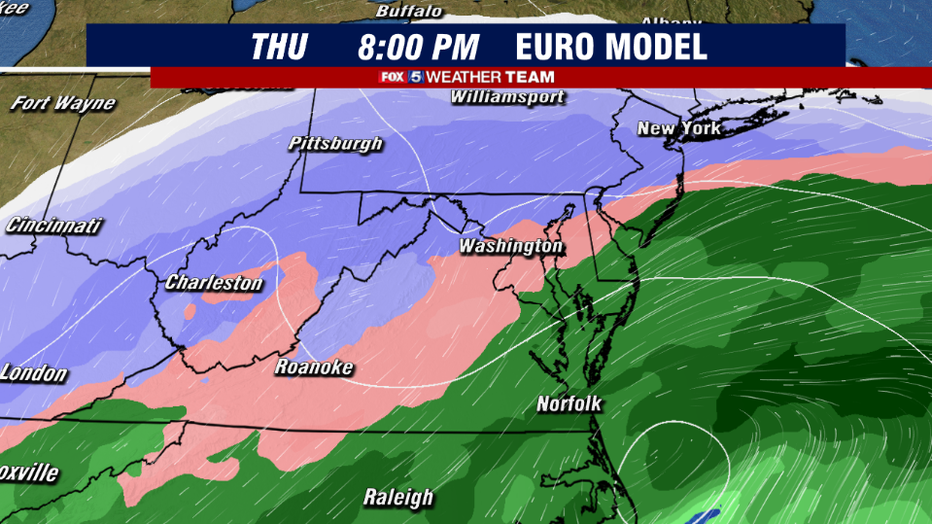 Heading into the afternoon and evening, warm air aloft should change snow over to a wintry mess of sleet and freezing rain for much of the I-95 corridor.

As we have seen with several of our other winter events this winter, this should really cut back on expected snowfall totals closer into the immediate D.C. metro area. However, the potential does exist for those to the northwest to pick up over half a foot of snow with this system. The storm should exit the region late Thursday night into early Friday morning. 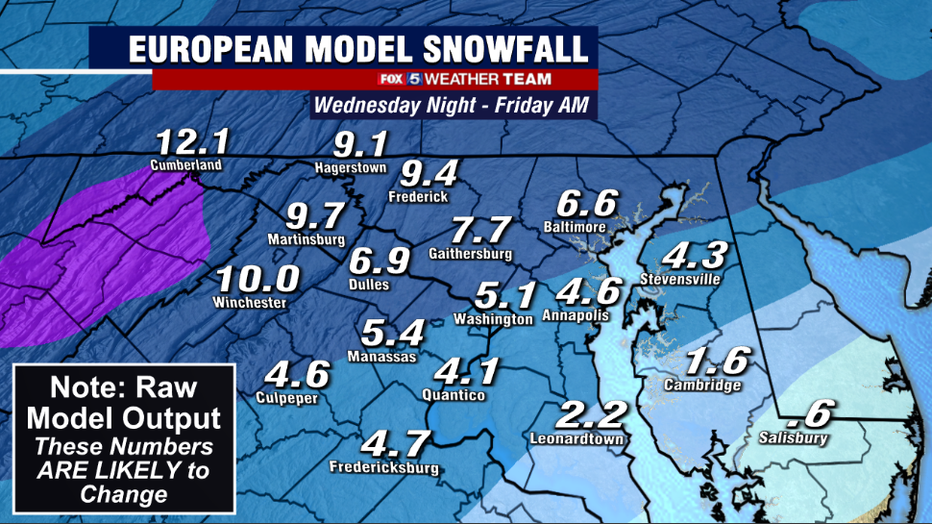 Latest-model projections are showing what is very typical from winter storms here in the D.C. region, which is the threat for more snow northwest and less southeast with storms like this. It is important to note that this season, the weather models have struggled a bit.

With just about every snow event this season, models have shown more snow than what we actually receive here in Washington. The reason likely has to do with models struggling with the amount of warm air the mixes in aloft, which has caused more mixing than pure snow here in Washington this season.

Please be aware that the numbers you see in many of these model images are likely going to end up being on the high side. 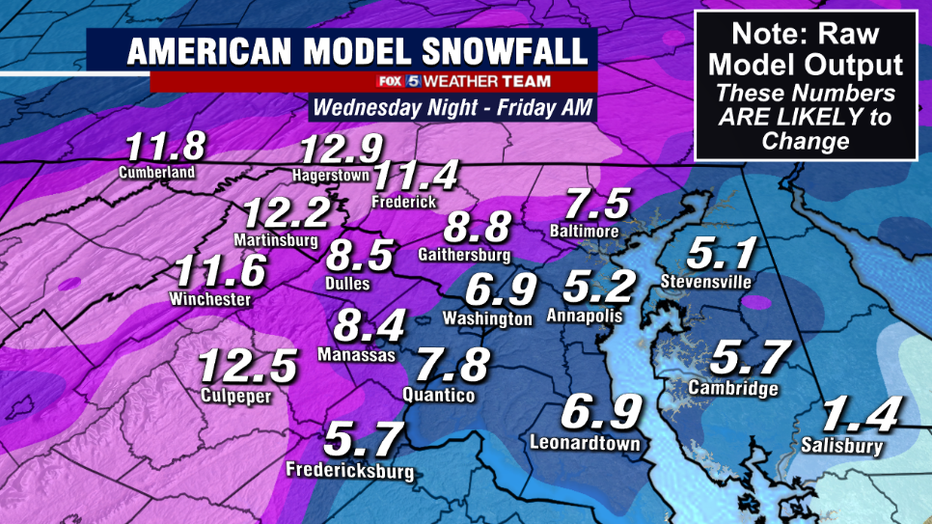 As a result, despite the model average this morning being about 4-8" of snow for the I-95 corridor, we are much more likely to see less snow than that. It is very early to put numbers on it, but 1-4" is far more likely than 4-8".

The higher totals are much more likely to be confined to the northwestern zones, as it does appear likely that they will stay cold enough for pure snow throughout the majority of the event. 6-12" of snow cannot be ruled out with this particular system.

No matter what snowfall amounts end up being, travel is expected to be treacherous across the DC region on Thursday. So plan ahead and, if you're able to do so, plan on a day of hunkering down at home. 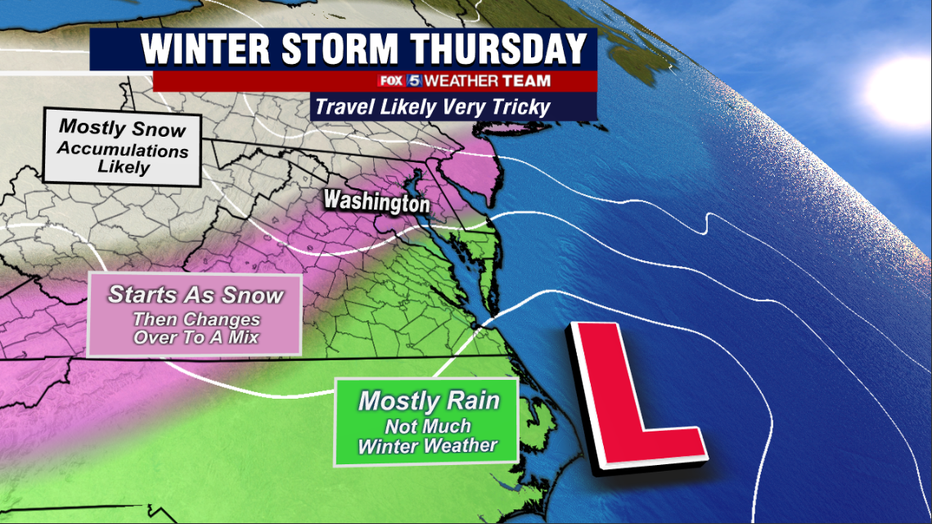 Keep it tuned to FOX 5 as we continue to work out the details on this particular system. We will have more updates over the next 36 hours as our region prepares for yet another wintry mess.