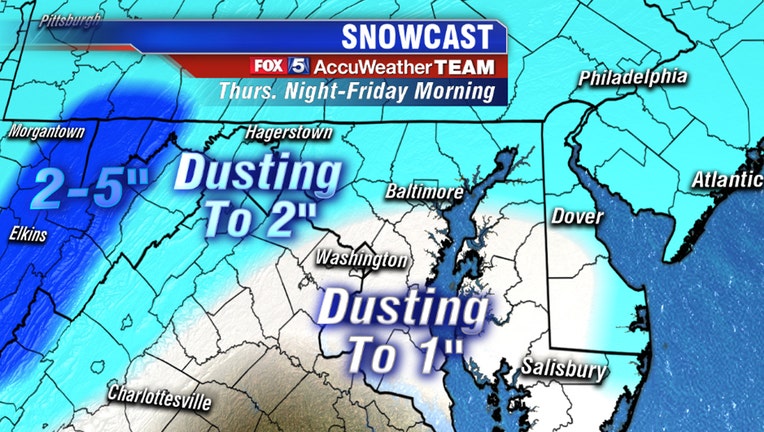 WASHINGTON - A fast moving winter weather system is crossing through the Midwest and heading in our direction later this evening -- and the Washington, D.C. region is expected to pick up its first measurable snow of the season.

While storm totals are not expected to be very memorable, the timing could still have an impact on area roads. Things have shifted a bit since yesterday, so here are some times you need to keep in mind over the next 24 hours.

2 p.m. - 5 p.m. | Weather models suggest there could be some scattered snow showers around the region, particularly for counties west of D.C. These are not expected to drop much snow, with only a few areas receiving a light dusting. It should not be enough to cause issues for the evening commute.

5 p.m. - 8 p.m. | Steadier, light snow begins to spread over the region from west to east. With temperatures bitterly cold in the upper atmosphere, the snow is expected to be of the light and flakey variety. It won't take very long to stick once the snow begins falling thanks to the very cold night last night and lack of afternoon sunshine and warming today.

9 p.m. - 1 a.m. | The majority of weather models show the bulk of our accumulations during this time period. Systems like this one that come across the center of the county tend to be a little moisture starved compared to the bigger storms that come up from the south. This should help keep totals from being too extreme, with the vast majority of the region receiving less than 2 inches of snow. Still, there could occasionally be a heavy burst of snow in a few places. Light snow is expected to stick to the roads due to the cold temperatures. So if possible -- avoid the roads later this evening and let the road crews do their job.

1 a.m. - 3 a.m. | Snow ends from southwest to northeast across the region. A spotty flurry or snow shower cannot be ruled out, but no further accumulations are expected after this time frame.

A Note On Schools: It's the question I get more than any other during snow events: "Will I have school tomorrow?" The short answer is yes. Unless something changes considerably as the storm approaches the region, the light amounts should not keep schools closed tomorrow. Originally, the biggest concern was the timing - because it looked like snow would not end until the start of the morning rush hour which would have made delays much more likely. With the snow expected to end several hours prior to sunrise, fewer delays can be expected. As for the District, Southern Maryland, Fairfax, Prince George's, Prince William, and Anne Arundel counties…I will not rule out possible delays but would not be shocked in the least if these places open on time. North and west, where slightly more snow is expected, the odds for delays go up a bit - but still no guarantee. Roads around the region have been pre-treated today and it looks as though road crews will have several hours to work, after the snow stops and before the morning rush gets started, to get things cleaned up. The message is basically this -- do your homework kids!

While the focus is heavily on Friday at this time, do be aware that it is not the only system that has the potential to bring accumulating snow to the region over the next 48 hours.

A Note On Saturday: Do not forget that we are not just looking at the potential for snow this afternoon -- but we are also keeping an eye on what could potentially be a more significant snow event for our region on Saturday. You should be watching this system -- particularly if you live east of the I-95 corridor. There could be the potential for our friends in Southern Maryland and the Eastern Shore to be dealing with a "sled-able" snow by Saturday afternoon. We cannot even rule out the possibility of a few inches in downtown Washington -- but models need to be carefully monitored over the next 24 hours. The storm tracks with this weekend storm will be absolutely critical in determining who sees snow and how much. Unlike your "typical" D.C. snow event, if the system materializes it would be more likely that the higher amounts would be south and east of Washington, while some northwest suburbs could be left untouched (see image above). We will go into this storm in much more detail Friday once we get our first system out of the way. Just be aware that our region is not out of the woods for accumulating snow after the Thursday-Friday system exits the region.