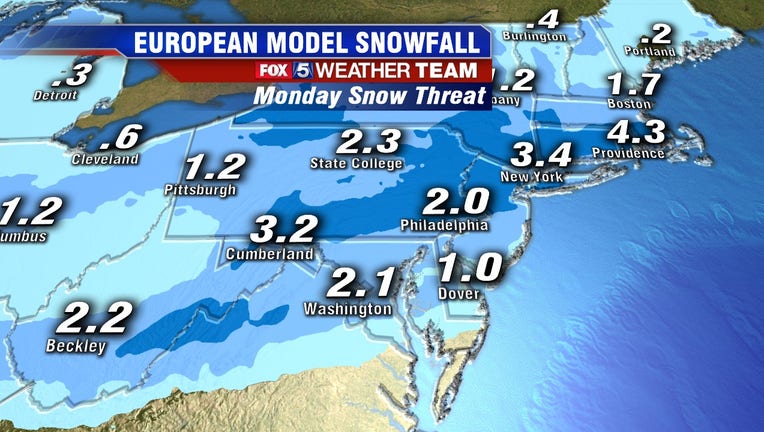 WASHINGTON - As we told you about in an article released yesterday, we are currently in the midst of a pretty active storm pattern in mid-December. That does not mean every storm that comes our way will bring the threat of winter weather. Some, like Friday and Saturday, will just be plain old rain. Monday though brings a very interesting setup to our region and one that does have the potential to leave some accumulating sleet and snow. 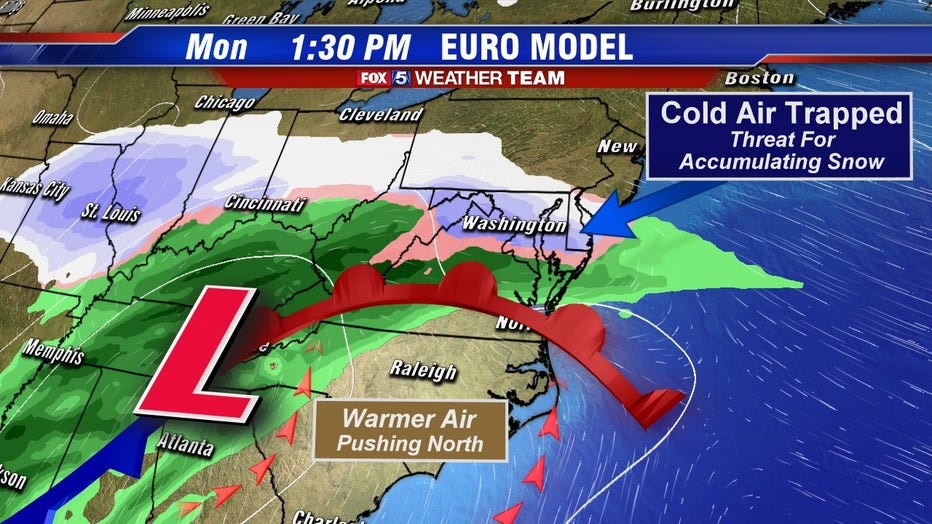 The process is known as overrunning. This is where a storm system passing to the west drags up some warm, moist rich air along with it. At the same time, colder and drier air will be in place over our region. Since cold, dry air is heavier than warm, moist air you force the warm air to rise up and over the cold air. As the warm air rises, it cools and condenses and, if the cold layer below it is sufficient enough, you develop some steady bands of snowfall. This morning’s run of the European model, widely considered by forecasters to be the most accurate, shows this scenario happening, overspreading the region with some steady snowfall late Monday morning into the afternoon. 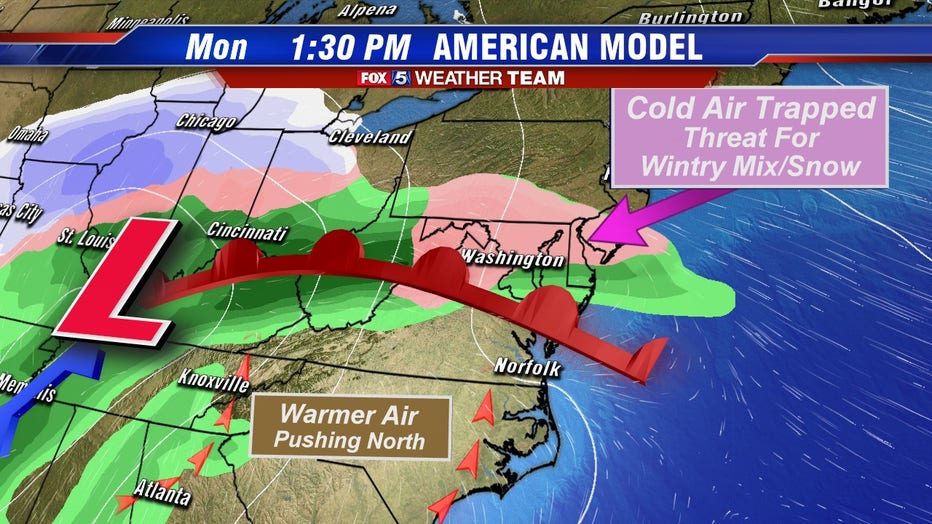 As of Thursday morning, its counterpart, the American model, has also come on board with showing the threat for some wintry weather. However, the American model solution is farther west with the core storm system (the big L on the map above) and is therefore much lighter with the precipitation. This leads to it being more of a mixture than a snowfall, though even a steady wintry mix or sleet can accumulate under the right conditions.

The keys to this event will be first, how quickly the moisture arrives. The earlier it does, the more likely it is to be snow. If it holds off until the afternoon and temperatures are allowed to warm a bit, this would increase the odds we would deal with a mixture or potentially just plain old rain. The second key will be the exact location of the storm system. If it is closer and more southern like the European is suggesting, the precipitation could start rather heavily. This is important because when you precipitate heavily into cold, dry air you cool the air mass even more, which is a process that weather models handle poorly. This would have the potential to cause some heavy, wet snow banding in parts of our region and that could cause roadways to get messy in a hurry.

If there is any good news, it is that even at its worse this is not expected to be an all snow event. Overrunning means warm air is pushing northward, and eventually, it will overcome the cold air in place and as a result, we would likely change from snow to a wintry mix to an all rain event particularly for those of us along and near the I-95 corridor. Things could remain trickier for longer farther to the northwest. Regardless, you will want to keep your eye on this system as you prepare to get yourself back to work and the kids back to school after the weekend ahead, as the new workweek could get off to a less-than-ideal start in our region.