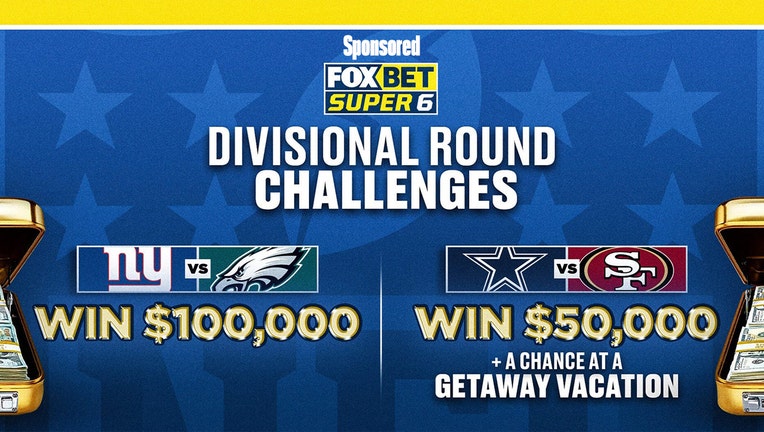 There were thrilling wins for the Jaguars, Giants and Bills, the banged-up Ravens gave the Bengals a run for their money, and the Cowboys ran Tom Brady and the Buccaneers out of their own stadium in a 31-14 rout.

But if you thought the first weekend of playoffs was fun, have we got news for you — the divisional round matchups will be even better.

There are two games, in particular, we've got our eyes on — the huge Giants-Eagles matchup that goes down Saturday night, and the Cowboys-49ers game that kicks off Sunday. The first contest features bitter NFC East foes; the second features America's Team facing off against America's Cinderella. And both games are on FOX.

Well, prepare yourself for more excitement because Terry Bradshaw and FOX Bet Super 6 are giving you huge opportunities to cash in big on these battles in two different contests.

The two FOX Bet Super 6 playoff challenges are free-to-play contests in the FOX Bet Super 6 app where players pick six different outcomes in the marquee matchups between the Giants and the Eagles and the Cowboys and 49ers. From the teams with the most tackles to the winners and the margins of victory, if you predict all the outcomes perfectly, you could be on your way to two big payouts.

In the Giants-Eagles matchup, $100,000 of Terry's money is at stake. In the Cowboys-Niners game, you could win $50,000 and a getaway vacation. After you submit your picks for Dallas-San Francisco, opt in to play for the vacation sweepstakes. If your name is drawn, a sweet vacay could be all yours.

For both of these divisional-round challenges, you have to get your picks in before the games kick off on Saturday and Sunday. And remember, FOX Bet Super 6 is free to play, it's easy, it's fun and people really do win.

Before you head over to the app to make your selections, read our predictions below!

Which team will have the highest kick return average and what will that average be?

It's tough to bet against Philly's Boston Scott in this spot. While the Giants' Gary Brightwell has racked up 555 yards on returns and Scott has notched 406, B. Scott averages more per return at 27.1.

Easily go with the Eagles in this category. They have the league's best defense, and the Giants D ranks in the bottom third. We're going with the superior defense to have more tackles in this matchup.

Which team will have the longest punt and how long will it be?

New York, stand up because we like the Giants' Jamie Gillan to rule the day when it comes to the punt game. Gillan has 74 punts on the season, so he has had some practice leading up to this showdown. And his season-long 69-yarder is tied for 13th best in the NFL this season.

Which team will have the most rushing yards and how many will they have?

This one is tough because these two squads are neck-and-neck in this category.

When it comes to the ground game, the Giants average 148.2 yards per contest, and the Eagles average 147.6. And both quarterbacks contribute heavily to that ground-game tally. As a matter of fact, in the Giants' win over the Vikings in Super Wild Card Weekend, NY QB Daniel Jones recorded 78 rushing yards of his own. And if Philly's Jalen Hurts is still favoring his shoulder injury, he might opt for the run more frequently this week.

However, Jones is coming off an electric win over Minnesota in which he and running back Saquon Barkley put in work with their legs. So we'll tip our hats to NY.

Which team will have the longest field goal and how long will it be?

We're going to go with a tie. Giants' Graham Gano has a season-long field goal of 57 yards. Eagles' Jake Elliott's longest for the year is 56. Gano's kicks have resulted in 119 points; Elliott's 111.

New York showed last week why they're a team to watch in the NFC. And yes, it took a while, but Daniel Jones is finally showing consistent glimpses of just how good he can be at the quarterback position. Brian Daboll is also proving his worth as a coach and leader.

They're just too good on both sides of the ball. From A.J. Brown to Hurts, C.J. Gardner-Johnson to Jordan Davis, it's easy to see how the Eagles secured the No. 1 seed in the NFC.

Prediction: Eagles by 8 to 9 points

Which team will have the highest kick return average and what will that average be?

Ahhh, the battle of the kick returners. And this one will be good. Cowboys returner KaVontae Turpin made a name for himself in Dallas after getting called up from the USFL. And Ray-Ray McCloud has been clutch for San Fran in the kick return game.

Ray-Ray gets the edge here, though, because he has more returns and has racked up more yards on those returns than Turpin this season.

Let's go San Francisco here. San Francisco has one of the NFL's top defenses, and the 49ers D will be fully locked in against Dallas in this pivotal divisional-round matchup.

Which team will have the longest punt and how long will it be?

Dallas' Bryan Anger has a season-long, 83-yard punt on his résumé. So if you're looking for one to go the distance this weekend, look no further than Anger.

Which team will have more rushing yards and how many will they have?

The Cowboys and the 49ers both have incredible rushing games. Dallas averages 135.2 yards per contest and the Niners average 138.8. Both squads rank in the league's top 10 in this category.

But we'll go with the home team to rule the run game Sunday night at Levi.

Which team will have the longest field goal and how long will it be?

Cowboys kicker Brett Maher is crossing his toes as we speak that he doesn't repeat last weekend's disastrous performance. In the Cowboys' 31-14 win over the Buccaneers, Maher missed a record four field goals. Though the misses didn't cost his team a win, it cost a bunch of bettors who had backed the Over a bunch of bucks.

At any rate, what's the likelihood Maher has the yips for two consecutive weeks? We'll go with Brett and the Boys on this one.

At FOX Bet, the 49ers are currently favored by 3.5 points, and we, too, are predicting a tight game.

Dak Prescott looked like Tom Brady in his prime against — ironically — Brady's Buc's in the wild-card round. And kudos to Dallas for snagging its first road playoff win in 30 years. But the playoff buck stops in the Bay for the Boys.

And that's largely because San Francisco gets the edge when it comes to home-field advantage.

Home turf plus Christian McCaffrey and the Niners run game will make the difference as it comes down to the wire. And indeed, it will come right down to the wire this weekend.

Now, it's your turn to play!

Remember, there are two different contests and two separate chances to win big money. Terry's $100K is up for grabs in Giants-Eagles and $50K plus a getaway vacation if you opt in for the drawing.

Open up your FOX Bet Super 6 app and make your picks for both of these exciting games. Submit your selections for the contests before each kicks off! And remember to share your picks with us by tagging @FOXSuper6 and @EricaReneeD and using the #EricaSuper6 across all social media platforms.

Download the FOX Bet Super 6 app for your chance to win thousands of dollars on the biggest sporting events each and every week! Just make your picks and you could win the grand prize. Download and play today!