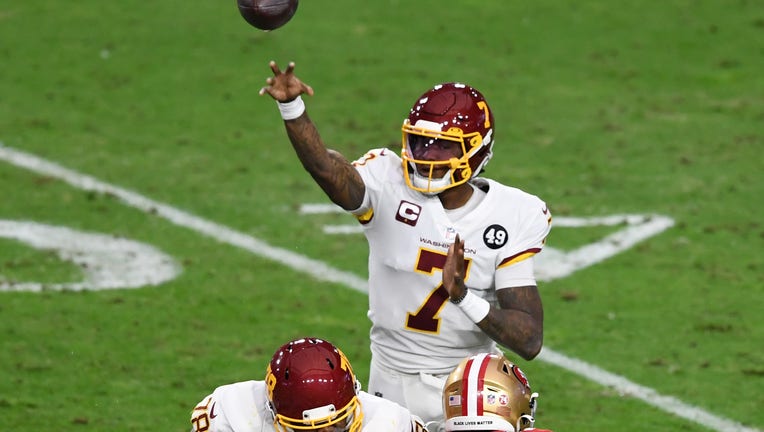 Quarterback Dwayne Haskins #7 of the Washington Football Team delivers a pass against the San Francisco 49ers in the third quarter of the game at State Farm Stadium on December 13, 2020 in Glendale, Arizona. (Photo by Norm Hall/Getty Images)

WASHINGTON - The Washington Football Team is once again atop the NFC East standings, but will be without a lot of its key players Sunday in a critical late-season matchup against Seattle.

On top of the injury list is quarterback Alex Smith, who strained the calf in his surgically repaired right leg last week against San Francisco.

Washington's former 1st-round draft pick Dwayne Haskins will get the start under center.

Smith is the clear frontrunner for the NFL's Comeback Player of the Year award, and he has led Washington to a four-game winning streak that now gives the team the inside track for a division title and playoff berth.

Haskins, conversely, fell out of favor early this season under new head coach Ron Rivera. But Haskins has a chance at redemption now.

The game kicks off at 1 p.m. from FedEx Field. You can catch the game live on FOX 5.

Other Washington players ruled out today include linebackers Kevin Pierre-Lewis and Cole Holcomb. Emerging rookie running back Antonio Gibson is also out with a toe injury.