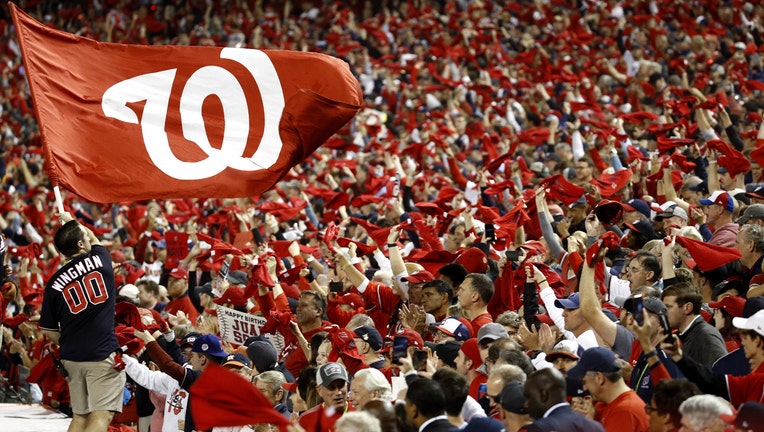 Fans cheer during the first inning in Game Three between the Houston Astros and the Washington Nationals of the 2019 World Series at Nationals Park on October 25, 2019 in Washington, DC. (Photo by Patrick Semansky - Pool/Getty Images)

WASHINGTON (FOX 5 DC) - For the first time in team history, the Washington Nationals have won the World Series! It's the District's first World Series title since 1924.

Mayor Muriel Bowser's office announced early Thursday that the championship parade will be held on Saturday, November 2 at 2 p.m.

The following is a map of the parade route: 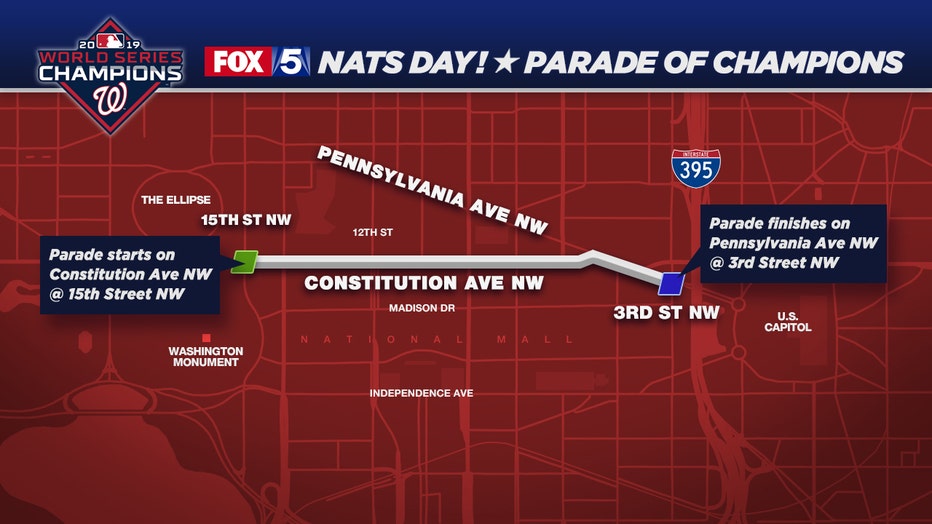 The FOX 5 DC weather office is expecting clear skies, and cool temperatures for the parade.

Before you head down to the parade, please note the District's laws on drinking alcohol in public places and public intoxication.

Nationals fans attending the parade are encouraged to:

• Text “NATS” to 888-777 to receive text alerts on safety, transit, and weather updates from the District about the parade
• Leave your car at home - take Metro or the many other public transit options as parking will be extremely limited near the route
• Use #FightFinished on social media

Tens of thousands of Nationals fans are expected to flock to downtown D.C. tomorrow afternoon for a chance to celebrate the team's historic victory!

In order to accommodate the tens of thousands of fans expected to turn out for the Nationals’ World Series Championship Parade, Metro has canceled all previously scheduled track work on Saturday. The system will run extra trains before and after the parade and frequent service on all lines. In Downtown DC, trains will arrive every 3-4 minutes, with departures from end-of-line stations every 6-12 minutes. Metro will have additional trains on standby to accommodate expected ridership. Additional Metro Transit Police officers, rail and bus supervisors, and support staff will be on hand to assist fans. Stations closest to the parade route (Federal Triangle, Archives, Judiciary Square) can be expected to be very crowded, and for your safety, trains may bypass stations during crowding conditions. Fans are encouraged to consider using Metro Center, Gallery Place, or Union Station as alternates. All three alternate stations are a short (less than 10 minute) walk from the Parade route. To view the Parade from the south side of the route, exit at Smithsonian, L’Enfant Plaza, or Federal Center SW, and then walk north across the National Mall.All Metrobus routes that travel to, near, or across the National Mall may be subject to detours or delays as a result of road closures. Follow @metrobusinfo or sign up for MetroAlerts email/text messages for updates. Bus customers traveling across the National Mall should use Metrorail instead.

The NATITUDE is off the charts after Nationals win World Series!

Public safety alerts – residents and visitors attending the Parade are encouraged to sign up for text alerts to receive safety, transit, and weather updates from the District. Signing up is simple and free – visit alertdc.dc.gov.

See something, say something – the public is the District’s first line of defense in an emergency. If you see suspicious activity, report it to the Metropolitan Police Department by calling 202-727-9099, texting 50411, or through iWATCH: iwatchdc.org.

The Washington Nationals are world champions - and the District is marking the event with a massive victory celebration on Saturday.

The public should expect parking restrictions in the area and should be guided by the posted emergency no parking signage. All vehicles that are parked in the area and in violation of the emergency no parking signs will be ticketed and towed. These vehicles will be relocated to legal spaces. Motorists whose vehicles are towed should call (202) 541-6083. All street closures and listed times are subject to change based upon prevailing or unexpected conditions. Motorists will encounter delays if operating in the vicinity of this event and may wish to consider alternative routes. The Metropolitan Police Department (MPD) and the District Department of Transportation (DDOT) also wish to remind motorists in the vicinity of this event to proceed with caution as increased pedestrian traffic can be anticipated.

The Washington Nationals are your World Series Champions!!!!

Local traffic will be permitted to travel south to E St. NW and northbound

traffic will be allowed to travel north from E St. NW

You can watch the Washington Nationals World Series Championship Parade on FOX 5 beginning at 2pm Saturday.