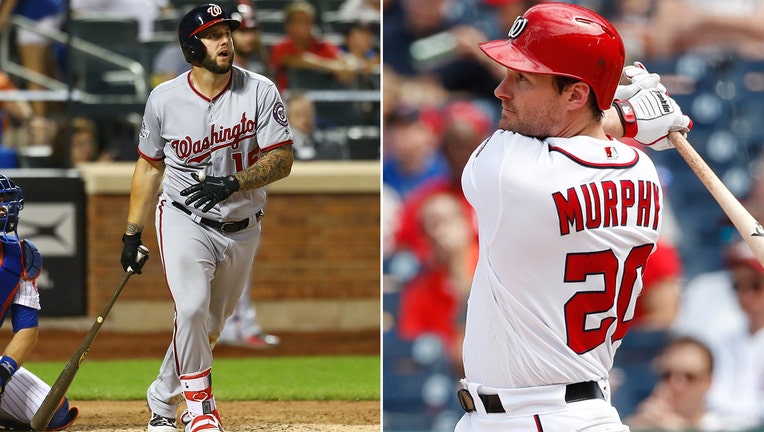 WASHINGTON (AP) -- Essentially throwing in the towel on a disappointing season, the Washington Nationals traded second baseman Daniel Murphy to the Chicago Cubs and first baseman Matt Adams to the St. Louis Cardinals on Tuesday.

Despite a roster that boasts such stars as Max Scherzer and Bryce Harper, Washington went into a three-game series at home against Philadelphia with a losing record of 62-63, 7½ games behind the NL East-leading Atlanta Braves.

General manager Mike Rizzo and the team owners gambled at the July trade deadline, standing pat and expressing faith in the roster as constituted. The Nationals trounced the New York Mets 25-4 that night, but are 9-10 since, including a 2-5 road trip through Chicago and St. Louis that featured a 4-3 loss at Wrigley Field on a two-out, walk-off grand slam.

"We felt that coming off that road trip and into this most recent homestand was a time that was a litmus test for us ... and we felt that the timing was right to make the vital decisions that we had to make," Rizzo said.

The deals came three weeks after the July 31 non-waiver trade deadline, and the Nationals aren't getting much in return.

For Murphy, who was hitting .300 since his return from knee surgery, the Cubs are swapping Class A infielder Andruw Monasterio and a player to be named or cash. For Adams, the Cardinals are sending $50,000 to Washington.

"My thoughts are it's really bittersweet," Murphy said. "I sat at this podium probably 2 1/2 years ago. The Washington Nationals were the only offer I had. They took a chance on me three years ago and I feel very disappointed in myself that it kind of came to this point, I guess would be the easiest way to describe it."

The 33-year-old Murphy was a big hitter during his time in Washington. A postseason star in 2015 with the Mets, he signed with the Nationals that winter and was an All-Star the next two years.

Asked how close the team came to including Harper -- a free agent after the season -- in the Tuesday deals, Rizzo said: "You have to get a deal that makes sense to trade one of the elite players in the game."

Harper, who struggled for much of the first half, is hitting .350 since the All-Star break.

"I've been part of this organization for seven years and I look forward to coming in and doing my job every single day and I had no fear of being traded or let go on waivers or anything like that," Harper said.

The Nationals were coming off two consecutive division titles under manager Dusty Baker, who was fired after last season and replaced by rookie skipper Dave Martinez.

Murphy expressed support for Martinez, without even being asked about him.

"Right man for the job here in DC," Murphy said.