WASHINGTON - An exasperated Tom Brady put his hands on his knees and looked down at the field after his second interception in the first quarter. 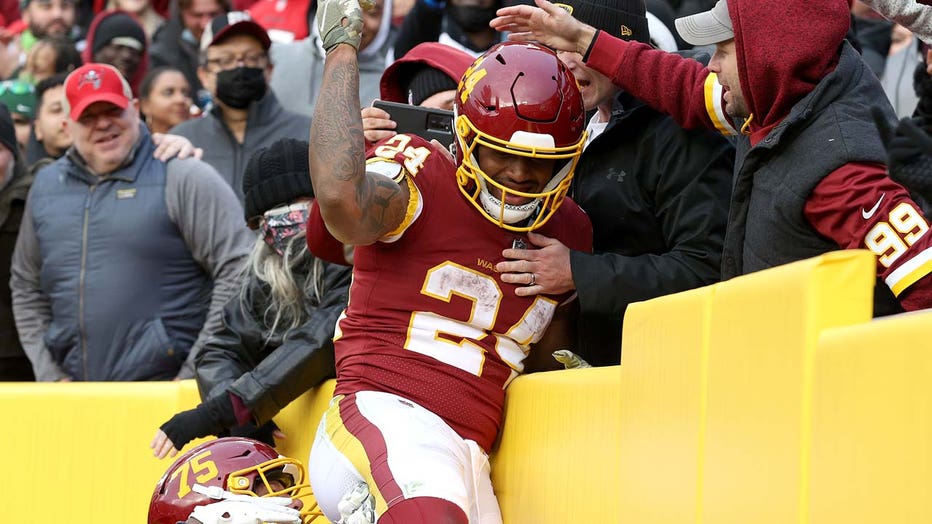 LANDOVER, MARYLAND - NOVEMBER 14: Running back Antonio Gibson #24 of the Washington Football Team celebrates after rushing for a fourth quarter touchdown against the Tampa Bay Buccaneers at FedExField on November 14, 2021 in Landover, Maryland. (Phot

Hours later, the defense couldn’t get off the field late in the fourth with the chance to dig the defending champions out of another hole.

Brady was picked off twice in his first six passes, and the Tampa Bay Buccaneers surrendered a clock-killing, 19-play drive that sealed a 29-19 upset by Washington on Sunday.

It’s their second consecutive loss on either side of the bye week, a performance coach Bruce Arians called embarrassing.

The quarterback several Washington players referred to as the "G.O.A.T." was one of the goats in the worst way as the Buccaneers fell to 6-3.

"Not a great day of football for us," said Brady, who finished 23 of 34 for 220 yards and two touchdown passes but threw two interceptions just like during the loss at New Orleans two weeks ago. "We just never really played on our terms. We played from behind the whole game, and they played a good game."

Tampa Bay was dealt an extra blow in the last minute when nose tackle Vita Vea was carted off with an injury on the final play of the 80-yard drive over 10:26 that finished things off for Washington (3-6). Arians did not have an update, but said Vea felt something in one of his knees — and the concern was real afterward.

"You just hate to see him keep going down," linebacker Devin White said. "If we got him, great. If we don’t, man, I’m gonna miss playing with him for the rest of the season." 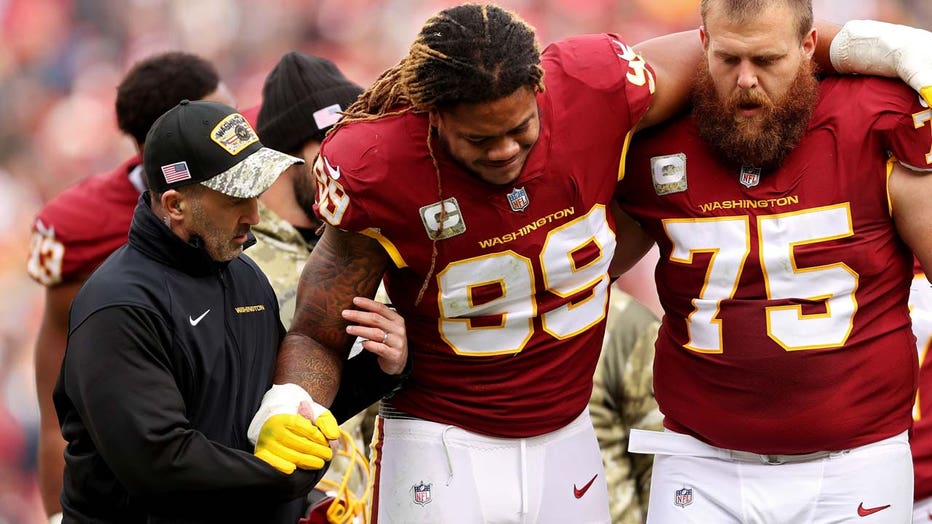 LANDOVER, MARYLAND - NOVEMBER 14: Chase Young #99 of the Washington Football Team is help off the field after an injury during the first half against the Tampa Bay Buccaneers at FedExField on November 14, 2021 in Landover, Maryland. (Photo by Patrick

Washington lost reigning NFL Defensive Rookie of the Year Chase Young to a right knee injury in the first half. Young gave a halftime speech to teammates and was back on the sideline later on crutches.

"There’s some concern," coach Ron Rivera said. "We’ll have him evaluated tomorrow. Potentially an ACL, but we’re not sure yet."

The Buccaneers (6-3) couldn't find much of a rhythm on either side of the ball in a rematch of their wild-card victory at Washington from January.

Brady's interceptions — one off the hands of rookie Jaelon Darden and another inexplicable toss that was caught by Washington safety Bobby McCain — disjointed the NFL's best scoring and passing offense, which did not have a first-half touchdown for just the fifth time in the past two seasons.

McCain said Washington took offense to Tampa Bay opting to start with the ball after winning the coin toss and later deciding to go for it on fourth-and-short in its own territory.

Flustered all afternoon by Washington's defense, Brady bounced back in the second half to throw touchdown passes to Cameron Brate and Mike Evans. But Tampa Bay's defense could not stop Washington's offense on the final, clock-draining drive. Rivera lived up to his "Riverboat Ron" nickname by going for it on fourth-and-goal from the Tampa Bay 1-yard line with 31 seconds to go, and Antonio Gibson's second touchdown run of the day put the game away.

A very happy Monday for Washington Football Team fans -- but does yesterday’s win restore your support for the team?

"They beat us," Bucs linebacker Lavonte David said. "We had an opportunity to get off the field, and we didn’t. We talk a lot of stuff, but we didn’t play like it. That was a moment to put our stamp on the game, and we didn’t."

Washington QB Taylor Heinicke put his stamp on the improbable result much earlier, hooking up with DeAndre Carter for a 20-yard TD pass and leading a 71-yard drive in the third quarter. A pass interference penalty on the Buccaneers set up Gibson's first TD run — one of several self-inflicted mistakes made by Tampa Bay, which was flagged six times for 43 yards.

"The stupidity has to go away if we’re going to go anywhere," Arians said. "We’re a very dumb football team, and that’s a reflection on the coaches."

Heinicke, who earned his contract by impressing in a surprise start against the Buccaneers in the playoffs, was 26 of 32 for 256 yards and managed the game like a veteran on the final drive.

"That was a grown man drive," Carter said. "Biggest drive of our season."

New kicker Joey Slye was perfect in his Washington debut, making field goals from 46, 28 and 29 yards and going 2 for 2 on extra points. Slye also took a perfect angle to run a kick returner out of bounds in the second half.

A moment of silence was held for former Washington linebacker and broadcaster Sam Huff, who died Saturday at age 87. Huff went to one Pro Bowl with Washington and was a fixture in the team’s broadcast booth for decades after his playing days were over.

Washington: TE Logan Thomas missed a fifth consecutive game with a hamstring injury. ... CB Benjamin St-Juste was ruled out earlier in the week with a concussion. ... Rookie RT Sam Cosmi was back in uniform after missing time with an ankle injury, but Cornelius Lucas got the start.

Buccaneers: Look to avoid a three-game skid when they host the New York Giants on Monday, Nov. 22.

Washington: Visit the Carolina Panthers in Ron Rivera’s return and Cam Newton’s first home game back with the team that drafted him.