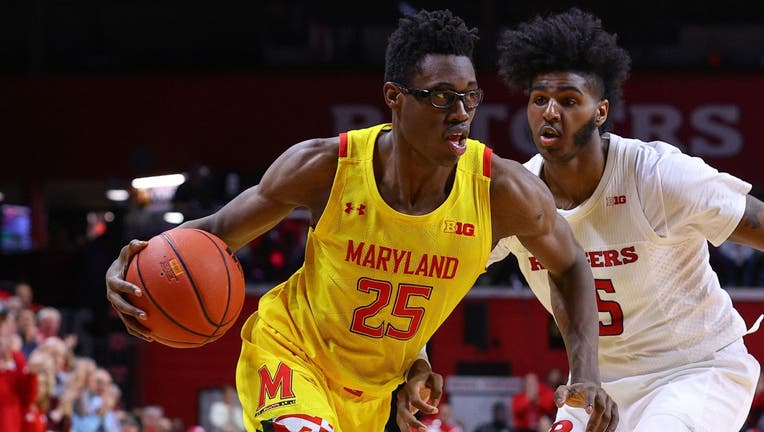 Maryland Terrapins forward Jalen Smith (25) during the second half of the college basketball game between the Rutgers Scarlet Knights and the Maryland Terrapins on March 3, 2020 at the Louis Brown Athletic Center in Piscataway, NJ. (Photo by Rich Gra

COLLEGE PARK, Md. - The Phoenix Suns selected University of Maryland forward Jalen Smith with the No. 10 overall pick in the NBA draft, opting for a young frontcourt player to build around their newly formed All-Star backcourt duo of Chris Paul and Devin Booker.

The 20-year-old Smith played two seasons at Maryland and averaged 15.5 points and 10.5 rebounds per game last season. His selection was a bit of a surprise considering prospects like guard Tyrese Haliburton were still on the board.

But Smith does have an intriguing mix of defense, rebounding and shooting. At 6-foot-10, he was the only Division I player to have 60 blocks and 30 3-pointers last season and was a third-team AP All-American.

Phoenix has already made a lot of noise this offseason, adding the 35-year-old Paul in a blockbuster trade with Oklahoma City on Monday. The Suns received the 10-time All-Star and forward Abdel Nader, while sending Kelly Oubre Jr., Ricky Rubio, Ty Jerome, Jalen Lecque and a protected 2022 first-round pick back to the Thunder.

It was a bold move for the Suns, who are trying to make the playoffs for the first time since 2010. They've got substantial momentum after going 8-0 to finish the regular season in the NBA's restart bubble in Florida, which left them just shy of a playoff berth.

The Suns now have three high-profile players in Paul, Booker and forward Deandre Ayton, who was the No. 1 overall pick in the 2018 draft. They also have young role players like guard Cameron Johnson and forward Mikal Bridges, who both can play multiple positions.

Smith could play a supporting role for Ayton, who averaged 18.2 points and 11.5 rebounds last season.

Booker has grown into one of the league's best young scorers in Phoenix. The 24-year-old averaged 26.6 points per game last season and made his first All-Star appearance.

Paul is owed about $41 million in the upcoming season and has a player option for $44 million in 2021-22, so it's imperative the Suns find some younger, inexpensive talent to fill out the roster.