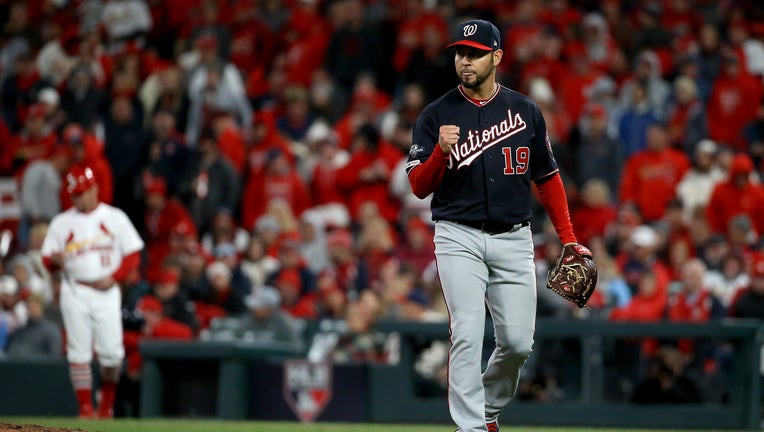 ST LOUIS, MISSOURI - OCTOBER 11: Anibal Sanchez #19 of the Washington Nationals walks off the field after retiring the side in the seventh inning against the St. Louis Cardinals in game one of the National League Championship Series at Busch Stadium

Sánchez had allowed just three runners when he took the mound for the eighth. First baseman Ryan Zimmerman robbed Tommy Edman with an outstanding diving grab at full stretch for the first out, but pinch-hitter José Martínez cleanly singled to center with two down for the Cardinals' first hit.

Sean Doolittle relieved and got four straight outs to finish the one-hitter for his first postseason save in two years.

Sánchez and Doolittle made life easy on manager Dave Martinez after the Nationals placed closer Daniel Hudson on the paternity list before the franchise's first appearance in the NLCS since the Montreal Expos moved to Washington ahead of the 2005 season.

Game 2 is back at Busch Stadium on Saturday. Washington ace Max Scherzer starts in his hometown, and Adam Wainwright gets the ball for St. Louis.