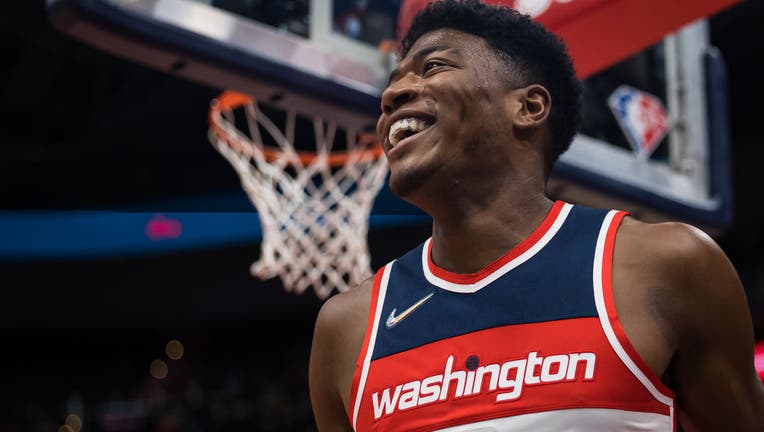 WASHINGTON, DC - MARCH 01: Rui Hachimura #8 of the Washington Wizards reacts after a play against the Detroit Pistons during the second half at Capital One Arena on March 1, 2022 in Washington, DC. NOTE TO USER: User expressly acknowledges and agrees

WASHINGTON - The NBA announced Monday that the Washington Wizards and Golden State Warriors will play two preseason games in Japan in 2022.

It'll be the Wizards’ first trip to Japan and the league’s 15th and 16th games in the country.

Rui Hachimura, who was born and raised in Japan, said in a press release he's "very excited to bring Wizards basketball to Japan."

"I cannot wait to see the arena filled with fans getting to see NBA basketball in person," he said.

Wizards owner Ted Leonsis expressed his excitement for the overseas opportunity as well. "We are so honored to represent the NBA and the wonderful game of basketball in front of an audience of Japanese fans," Leonsis said. "We are particularly excited to watch Rui Hachimura play in front of his fellow Japanese citizens. We were proud to welcome him into the DC Family nearly three years ago as a dynamic young talent and have only seen his growth as a player since.

"And our fans across our home market in Washington D.C. have a special connection to the Japanese people – marked by our annual celebration of the gift of cherry trees given to our city by the Mayor of Tokyo over 100 years ago. Celebrating American and Japanese cultures further strengthens our bonds, and so we look forward to taking on the Golden State Warriors and growing new fans of the sport we all love."

The NBA Japan Games 2022, which are presented by Rakuten, are scheduled for Friday, Sept. 30 and Sunday, Oct. 2 at Saitama Super Arena outside of Tokyo.