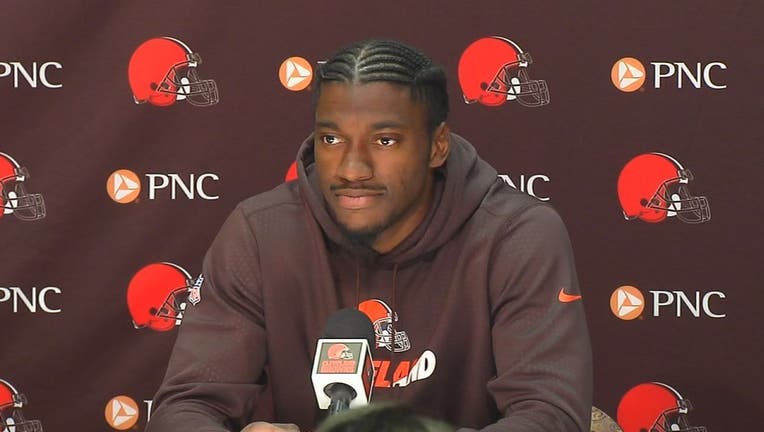 BEREA, Ohio (AP) -- As Robert Griffin III vacated the podium following a poised and polished news conference, the quarterback tapped his fingers on the dais and made clear the mantra for his new opportunity.

"No pressure, no diamonds," he said.

Though RG3 will face high expectations with the Browns -- blending in with a new city, team, coach and offensive system -- the former Redskins QB plans to handle all issues with a motivation stemming from numerous problems in Washington.

"I'm not trying to let any baggage hold me down from the past," Griffin said, "but I do have a massive chip on my shoulder."

Griffin's issues in Washington included a serious knee injury, tiffs with former coaches and a disconnect with some teammates that landed him on the bench for the entire 2015 season.

While he feels he has something to prove with the Browns, who signed him to a two-year, $15 million contract, Griffin admitted that he made mistakes and that he's learned from them.

"I know there's things that I could've done differently," he said. "I can't focus on that. I have to focus on what I'm doing here with the Cleveland Browns."

When vetting the quarterback before bringing him to the Browns, coach Hue Jackson grilled Griffin on his time with the Redskins.

The conversations and the questions were deep, but when walking away, Jackson got the sense that the 26-year-old has changed.

"He showed me that he's grown, that's he's learned. He understands that sometimes we all play roles when things don't go well," Jackson said. "He wanted to move beyond that and grow and become better."

Though he wouldn't address past comments in which he confidently expressed that he could be the best quarterback in the NFL, Griffin smiled and said he believes in his abilities.

Griffin's not alone in wanting to do what's best for the Browns.

"I believe iron sharpens iron and we can help one another," McCown said. "For me, it's we come together, we help each other and let's make this position as good as we can make it for our team."

McCown and Griffin will bring leadership to the quarterback room, but the Browns could infuse youth into the situation in next month's NFL draft.

Jackson has said several times that the Browns will consider a quarterback with the No. 2 overall pick.

"I love adding other arms, but I don't know how that's going to all unfold," Jackson said. "If there's an opportunity to make our team better, then that's what we need to do all the time and I think the players truly understand."

No matter what the team does in the draft, Griffin is determined to lead -- on and off the field.

He wants Cleveland fans to know he'll try to not add to the club's long list of questionable quarterbacks.

"I know the history a little bit of Cleveland and guys sometimes don't want to come here," Griffin said. "I wanted to come here and I wanted them to know that. They call this 'The Land' so we're going to make this ours and really give these fans what they deserve."

NOTES: Jackson said that CB Joe Haden, who had ankle surgery in March, is working hard to return to football activities by the time training camp starts. ... S Donte Whitner, who was released by the Browns on Saturday, tweeted that he wished he would've been informed by the team on its decision earlier. Jackson addressed Whitner's release, saying that it was a difficult decision, but one the team went through "1,000 times" to ensure that it was the right one.