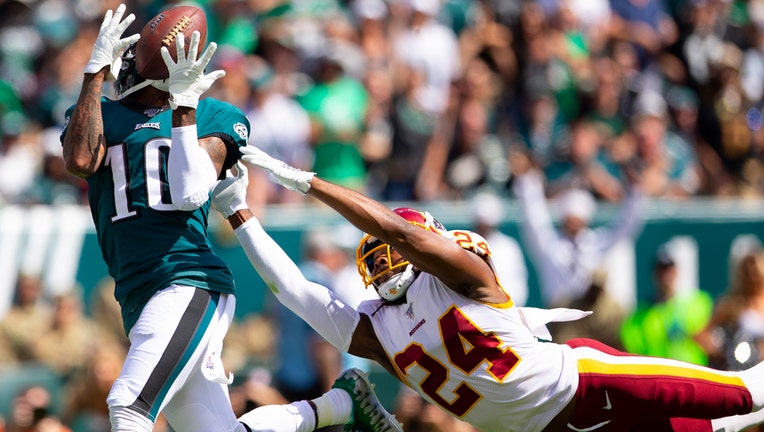 DeSean Jackson #10 of the Philadelphia Eagles catches a touchdown against Josh Norman #24 of the Washington Redskins in the second quarter at Lincoln Financial Field on September 8, 2019 in Philadelphia, Pennsylvania. (Mitchell Leff/Getty Images)

PHILADELPHIA - The Redskins surrendered a double-digit lead at halftime to lose their season opener at Philadelphia. The final score was 32-27.

The Burgundy and Gold impressed early despite entering the game as 10-point underdogs.

Veteran tight end Vernon Davis, who got the start in the absence of the injured Jordan Reed, hurdled an Eagles defender to break out a 48-yard touchdown on the Redskins' first drive. Davis, a D.C. native who lost his grandfather Saturday, was visibly emotional after the play.

Rookie receiver Terry McLaurin turned on the jets in the 2nd quarter to score a 70-yard touchdown in his NFL debut. The play gave the Redskins a 17-point lead.

The Redskins led 20-7 at halftime, but the Eagles brought their own fireworks in the 2nd half.

Redskins receiver Trey Quinn scored with seconds left in the game, but it wasn't enough.

The 'Skins season continues next Sunday at 1 p.m., when they host the Dallas Cowboys at FedEx Field. Watch live on Fox 5, and catch Redskins Game Time at 7:30 a.m. for pregame analysis.