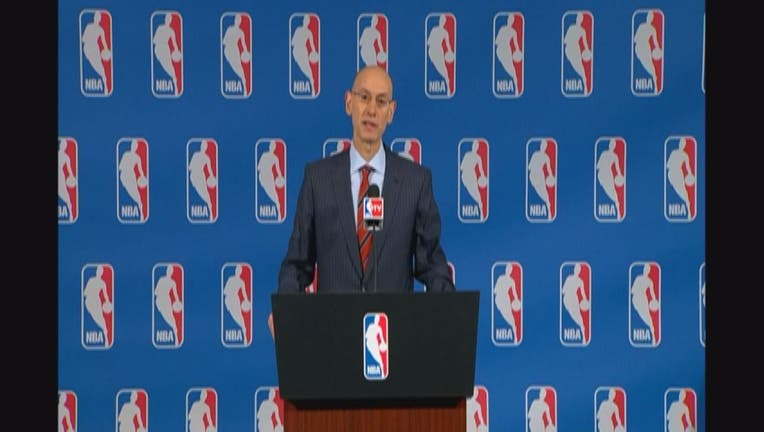 NEW YORK (AP) -- The NBA will begin putting sponsorship logos on player uniforms in 2017-18, a move that could generate at least $100 million annually and a step that the NFL, Major League Baseball and NHL have yet to take.

The three-year trial was approved Friday by NBA owners and will take effect when the league's contract with Nike begins. The patches will appear on the front left of the jersey, opposite Nike's logo, and measure about 2 1/2 by 2 1/2 inches.

Logos appear on international and MLS soccer jerseys, and many athletes in individual sports wear their sponsors' attire in competition.

Commissioner Adam Silver had said going with logos was inevitable because of the potential to add revenue. WNBA and NBA Development League teams already have logos, and NBA clubs were wearing them on practice jerseys.

Silver called the plan an "experiment" and said it was hard to estimate how much revenue it would generate because teams would be responsible for their own sales, and some could decide not to participate. But he said it could be $100 million annually.

"I think the greatest impact will be on sort of this amplifying effect of a company choosing to associate directly with a team's jersey, then going out and promoting that relationship in the larger market," Silver said. "I think that will lead to greater engagement of our fans with these teams."

Owners also discussed a North Carolina law that limits anti-discrimination protections for lesbian, gay and transgender people. Silver called it "problematic" for the league, but there was no decision on moving next year's All-Star Game out of Charlotte.

"The league believes that these groups need to be protected, but again, I think the right way to work to the proper resolution here is for the league to remain engaged in the conversation, rather than setting ultimatums or announcing we're not going to play our All-Star Game in Charlotte," Silver said.

There was also a presentation from Evan Wasch, the league's head of analytics, about ways the NBA could become more sophisticated about next season's scheduling to find further rest opportunities for players.

So the main business completed was the jersey sponsorships vote.

Besides the financial implications, Silver believes the sales can expand the league's growth oversees by drawing companies who want to be involved. He understands that fans who favor the traditional look might not like the logos, but will eventually see them as a way to improve the game.

"But there's a reason this is a pilot program," he added. "I mean, we listen very closely to our fans, and so we'll see what the reaction is."

Adidas enters the final year of his contract as the NBA's official outfitter next season. When Nike takes over, its logo will become the first on league's jerseys -- except for those of the Charlotte Hornets, who are owned by Michael Jordan.

The logo of his Jordan Brand, a subsidiary of Nike, could be on the Hornets' instead.

The sponsor patch will be adjusted to fit the dimensions of each sponsor's logo. It won't appear in retail versions of the jerseys, but clubs can sell jerseys with sponsor patches in their team stores.