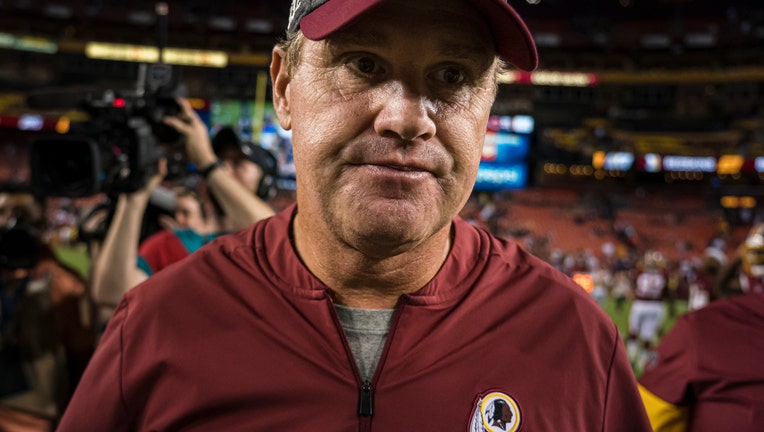 Head coach Jay Gruden of the Washington Redskins leaves the field after the game against the Chicago Bears at FedExField on September 23, 2019 in Landover, Maryland. (Photo by Scott Taetsch/Getty Images)

Former Dallas Cowboys quarterback Tony Romo never got to play in a Super Bowl during his NFL career, but will be a part of the broadcast again Sunday when the Kansas City Chiefs play the Tampa Bay Buccaneers.

Since joining the CBS broadcast booth, Romo has impressed viewers with his ability to predict plays coaches are about to call. The New Yorker even once described his commentary as "genius."

"I could do it every time," Gruden told the outlet. "He’s only right like 30% of the time. Those are usually pretty obvious, I mean. Nobody talks about the times when he’s wrong, but when he’s right, ‘Holy cow, he’s a genius.’ Oh, come on, man. Sure, it’s a run. Nope, it’s a pass. Sorry, I was wrong."

Romo told The Athletic in a separate interview he was trying to tone down the predicting.

"I think I’ve probably done it less on purpose a little bit," he said. "I don’t consciously try and do it or not do it. I like to be able to do multiple things, and it goes back to what I think people at home want to feel or hear about their team. I’m telling them the truth about everything I see, and you’re not always going to say the right thing or do the right thing.

"But I do feel like I care and want them to enjoy their game. I take into account anything I do when something might be too much or too little. It’s just a feel. It’s just instinctual. You might be right in the sense that I probably have throttled that back a little bit. But there’s always a time I’ll bring it out, especially if it’s a fun time to do it."

For what it’s worth, Romo sort of predicted that the Chiefs and Buccaneers would match up in Super Bowl LV. He made that prediction after the teams' Week 12 showdown.

"I’m gonna make a slight guess here," Romo said. "I think there’s a better than good chance, I don’t know what that percentage is, that these two are gonna be here in Tampa (for the Super Bowl)."

Gruden went 35-49 with one playoff loss during his 5+ seasons as Washington's head coach.

Gruden spent the 2020 season as offensive coordinator for the 1-15 Jacksonville Jaguars. He is now a free agent.