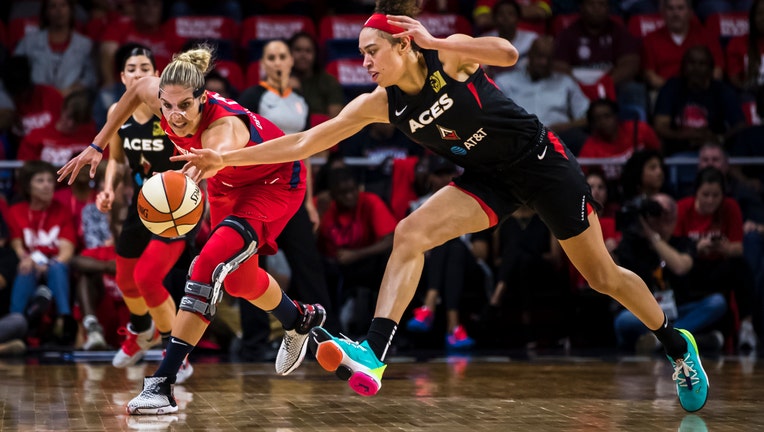 Elena Delle Donne #11 of the Washington Mystics and Dearica Hamby #5 of the Las Vegas Aces vie for the ball during the first half of Game One of the 2019 WNBA playoffs at St Elizabeths East Entertainment & Sports Arena on September 17, 2019 in Wa (Photo by Scott Taetsch/Getty Images / Getty Images)

Meesseman also bested her regular-season high of 25 for the top-seeded Mystics, who were playing their first postseason game since being swept by the Seattle Storm in last year's WNBA Finals.

In her first game in more than a month, Kristi Toliver added eight points, including a falling away, contested 3-pointer that stretched Washington's lead to 13 in the fourth quarter, an advantage that just barely held.

A'ja Wilson scored 23 points for Las Vegas, which twice got the deficit as close as two points in the final moments. Liz Cambage had 19 points and 12 rebounds, while Kayla McBride added 19 points.

Kelsey Plum had 16 points and nine assists, and missed a runner at the buzzer that would've forced overtime, two days after Dearica Hamby's 35-foot runner decided the Aces' 93-92, second-round win over Chicago.

After Toliver's 3-pointer stretched Washington's lead to 92-79, the Aces scored nine straight points to close the deficit to four, while twice forcing the Mystics into a shot-clock violation with the ball in Delle Donne's hands

After a missed shot on each end, Delle Donne hit a turnaround from near the right elbow to put the Mystics up four.

Plum answered with a layup on the other end to close it to two again. Delle Donne missed a jumper with under five seconds remaining, but while Plum was able to get an outlet pass and race inside the 3-point line, her runner under duress wouldn't fall at the buzzer.

Aces: Shot 73.3 % (11 of 15) during the opening quarter but still trailed at the end, 30-27. . Tuesday's series opener marked the Aces' first game in a WNBA semifinal series since making a run to the 2008 finals, when the team was located in San Antonio.

With a double-bye into the semifinal series, the Mystics were playing their first game in nine days. They were just 1-2 on five or more days' rest in the regular season. The fourth-seeded Aces also had a week to wait before their win Sunday.

Game 2 of the best-of-five series is Thursday in Washington.