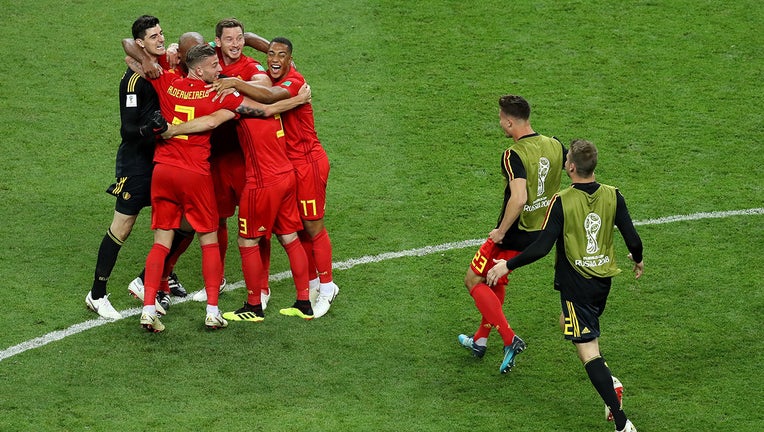 KAZAN, Russia (AP) - Neymar used Brazil's famed yellow jersey to shield his anguish. The Belgians, clad in red and dancing in a celebratory circle nearby, couldn't hide their relief.

Belgium reached the World Cup semifinals for the first time in 28 years, holding off five-time champion Brazil 2-1 Friday in one of the country's greatest soccer feats.

"We've achieved something that is really beautiful," said Kevin De Bruyne, who scored Belgium's second goal, "and it's not easy."

Belgium eliminated Brazil by successfully fusing the attacking potency of De Bruyne and Romelu Lukaku with the creativity of Eden Hazard and the goalkeeping exploits of Thibaut Courtois. Plus an own-goal from Brazil.

It all adds up to a semifinal match against France on Tuesday in St. Petersburg.

"Just treasure it and pass it down in the generations," Belgium coach Roberto Martinez said, still seemingly in awe of what his team achieved at the Kazan Arena.

Belgium took the lead after a slice of good fortune involving a pair of Manchester City teammates who were on opposing sides. Brazil midfielder Fernandinho's trailing right arm inadvertently helped Belgium captain Vincent Kompany's header land in his own net in the 13th minute.

De Bruyne then completed a counterattack launched by Lukaku to double the lead in the 31st minute.

As Belgium lost cohesiveness in the second half and Brazil's changes stirred the team, substitute Renato Augusto reduced the deficit in the 76th with a header. But it was too late for Brazil to muster an equalizer as Courtois thwarted several efforts to force the game into extra time.

While Belgium's golden generation is finally flourishing, Neymar is leading Brazil home after failing to live up to the expectations that come with being soccer's most expensive player. Crouching on the field, he pulled his shirt over his face while Belgium exalted in victory.

Humiliated 7-1 by Germany in the semifinals fours year ago on home soil with Neymar out injured, Brazil didn't even get that far this time. Just like defending champion Germany and Argentina before them, the Kazan Arena is where Brazil's World Cup challenge ended.

"Randomness happened and it was cruel to us," Brazil coach Tite said. "It was hard to swallow."

Especially after Brazil conceded only one goal in the previous four games in Russia. But the defense was breached after 13 minutes in Tatarstan. Fernandinho's own-goal ensured for the first time since March 2017 that Brazil was trailing in a competitive match. Unlike then - an eventual 4-1 victory over Uruguay - there was no comeback.

Not when Courtois was proving to be an impenetrable barrier in the Belgium goal, denying Marcelo's strike before the lead was extended by De Bruyne.

"They were more effective," Tite said, struggling to hold back tears. "Not a superiority in terms of performance, but in terms of effectiveness on the pitch."

Belgium held on even after Philippe Coutinho's cross was headed in by Augusto, who managed to evade Kompany and Jan Vertonghen three minutes after replacing Paulinho.

"Sometimes you have to accept that Brazil has got this finesse, that quality, and that they're going to break you down, and (Belgium) just refused to accept that," Martinez said. "This is something special."

Belgium, which finished fourth at the 1986 tournament and has never won the European Championship, is now on a 24-match unbeaten streak.

Criticized for his playacting, Neymar went down lightly under minimal contact from Marouane Fellaini at the start of the second half when Brazil trailed 2-0. But as the referee started to seek a video review, Neymar appeared to urge against it. A booking - if he got one for diving - would have ruled him out the semifinals.

Belgium will be without defender Thomas Meunier for the semifinals after tripping Neymar and earning a second yellow card of the tournament.

"I don't regret the yellow card, it was for the sake of the team," Meunier said, "and we have a good bench."

There is guaranteed to be a fourth straight European team winning the World Cup on July 15 in Moscow.

Either England or Sweden will face either Russia or Croatia in the other semifinal match on Wednesday in Moscow - a day after Belgium plays France in St. Petersburg.

"We're on equal footing with France," De Bruyne said. "The difference between the teams is minimal."