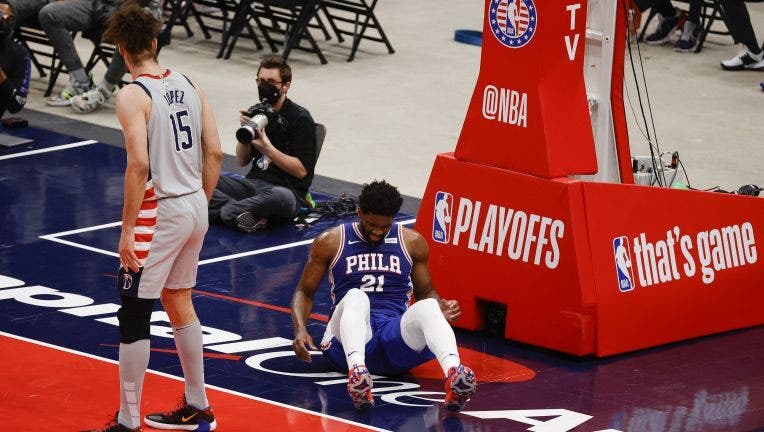 WASHINGTON, DC - MAY 31: Joel Embiid #21 of the Philadelphia 76ers lies on the floor during the first quarter against the Washington Wizards during Game Four of the Eastern Conference first round series at Capital One Arena on May 31, 2021 in Washing

WASHINGTON - Philadelphia 76ers All-Star Joel Embiid will not play in game five of the playoff series against the Washington Wizards after confirming he’d suffered a meniscus tear in his knee.

After Embiid left game four, the Wizards staved off elimination in the playoff series, defeating the top seeded 76ers 122-114.

READ MORE: Fan banned from Capital One Arena after running onto court during Wizards playoff game

Embiid is not scheduled to have surgery, and the Sixers will treat his injury with physical therapy. Embiid had an MRI on Tuesday and is considered day to day.

The Sixers lead the series 3-1, and have returned to Philadelphia for game five.

Embiid, who has a long injury history that includes missing his first two full seasons, was injured in Philadelphia's Game 4 loss. He wound up on the floor behind the baseline after having his shot blocked by Washington’s Robin Lopez on a drive to the basket in the first quarter.