The Insider Advantage poll shows Youngkin at 47% with McAuliffe at 45%. Princess Blandin has 2% of the vote with 6% undecided and with a 4.4% margin of error. 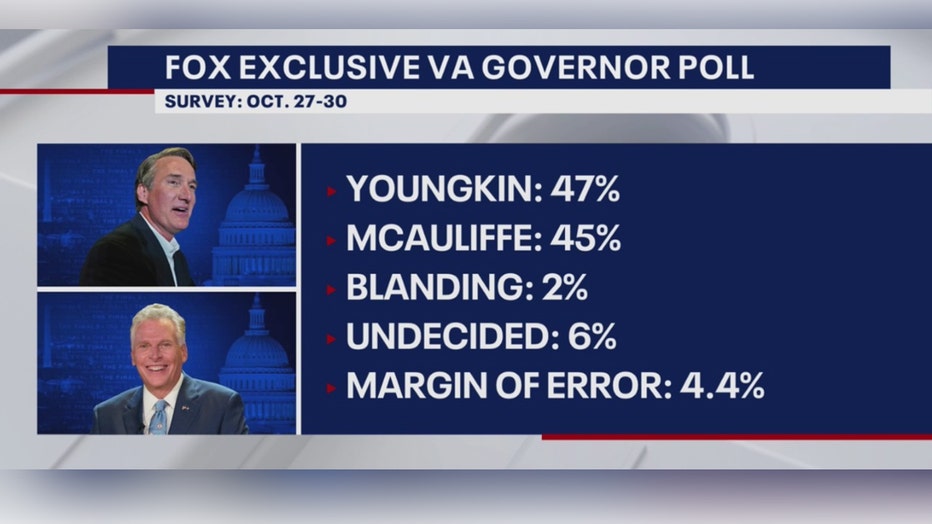 McAuliffe and Youngkin are set for a final day of campaigning on Monday ahead of Virginia's gubernatorial election Tuesday.

The candidates are expected to crisscross the commonwealth with stops in Roanoke, Virginia Beach, the Richmond area and northern Virginia.

McAuliffe, Youngkin set out on final day of campaigning ahead of Virginia’s gubernatorial election

Democrat Terry McAuliffe and Republican Glenn Youngkin are set for a final day of campaigning ahead of Virginia’s gubernatorial election Tuesday.

2021 VIRGINIA GOVERNOR RACE: EVERYTHING TO KNOW ABOUT NOVEMBER 2 ELECTIONS

Over the weekend, Youngkin made stops in southwest Virginia and McAuliffe visited suburban Richmond and northern Virginia.

Glenn Youngkin holds a rally in Loudoun County as Election Day is just hours away.

McAuliffe, who served as governor from 2014 to 2018, and Democrats are scrambling to stave off disaster after public polling has shifted in Youngkin's direction in recent weeks.