President Joe Biden announced on Thursday that the federal government has purchased an additional 200 million doses of coronvirus vaccines and said by the summer nearly every American will be able to get vaccinated.

Now, one month into his presidency, Joe Biden is on a glide path to attain that goal and pitching well beyond it to the far more ambitious and daunting mission of vaccinating all eligible adults against the coronavirus by the end of the summer.

Limited supply of the two approved COVID-19 vaccines has hampered the pace of vaccinations — and that was before extreme winter weather delayed the delivery of about 6 million doses this past week. But the United States is on the verge of a supply breakthrough as manufacturing ramps up and with the expectation of a third vaccine becoming available in the coming weeks.

That means the act of delivering injections will soon be the dominant constraint, and it's prompting the Biden administration to push to dramatically expand the universe of those who will deliver injections and where Americans will meet them to get their shots.

"It’s one thing to have the vaccine, and it’s very different to get it in someone’s arms," Biden said Friday as he toured Pfizer’s manufacturing plant in Portage, Michigan. The company is set to double its pace of vaccine deliveries in the coming weeks.

Since their approval in December, more than 75 million doses of the two-shot-regimen Moderna and Pfizer vaccines have been distributed, of which 63 million have been injected, reaching 13% of Americans. Nearly 45 million of those doses have been administered since Biden’s inauguration on Jan. 20.

The pace of deliveries of those vaccines is about to take off. About 125 million doses are set for delivery in the next five weeks, with an additional 200 million expected by the end of May and a further 200 million by the end of July. 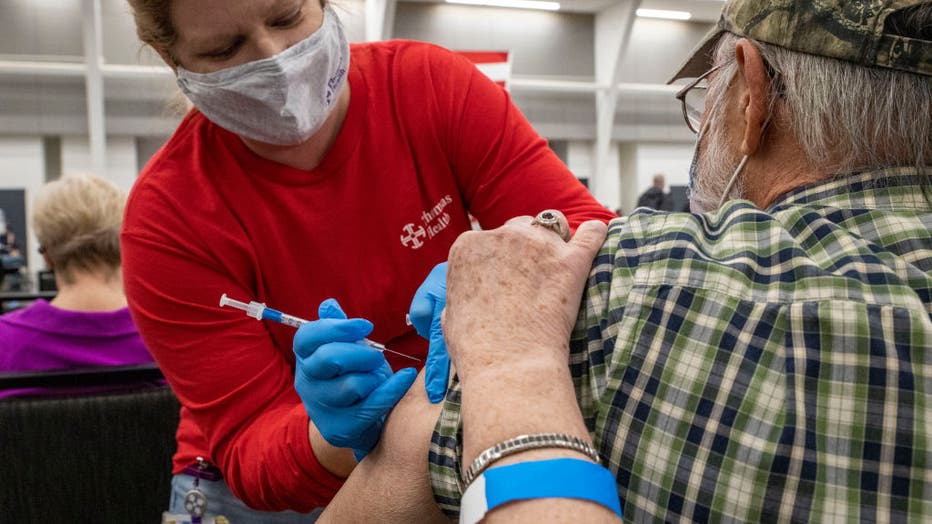 That's before the anticipated approval by the Food and Drug Administration for emergency use of a third vaccine, from Johnson & Johnson. The single-dose J&J vaccine is expected to help speed the path to immunity and requires half the vaccination resources of the two-shot regimens. But there is no massive stockpile of J&J doses ready to roll out on Day One.

"We’re going to be starting with only a few million in inventory," White House COVID-19 coordinator Jeff Zients said this past week. Still, when combined with the anticipated increases in the other vaccines, the J&J doses could prove the pivotal advance in delivering enough shots for nearly all American adults by the end of June, at least a month earlier than currently anticipated.

The daily inoculation average climbed to 1.7 million shots per day last week, but as many as double that number of doses are soon expected to be available on average each day. The focus of Biden’s team is now quickly shifting to ensuring those doses can get used, though the administration has resisted the calls of some health experts to publicly set a "moonshot" target for how many daily doses it hopes to deliver.

Biden first set his target of 100 million doses in 100 days on Dec. 8, days before the first vaccines received emergency use authorization. By Inauguration Day, it was clear the U.S. was on course to attain that goal.

Dr. Leana Wen, an emergency physician and public health professor at George Washington University, said she would like to see the administration commit to a more ambitious 3 million shot-per-day target.

"I want to see them put that stake in the ground and ask everyone to help them achieve that goal," she said.

The current pace of vaccination dipped markedly in recent days as winter weather shuttered administration sites in Texas and across the South, and icy conditions stranded supplies at shipping hubs in Louisville, Kentucky and Memphis, Tennessee. 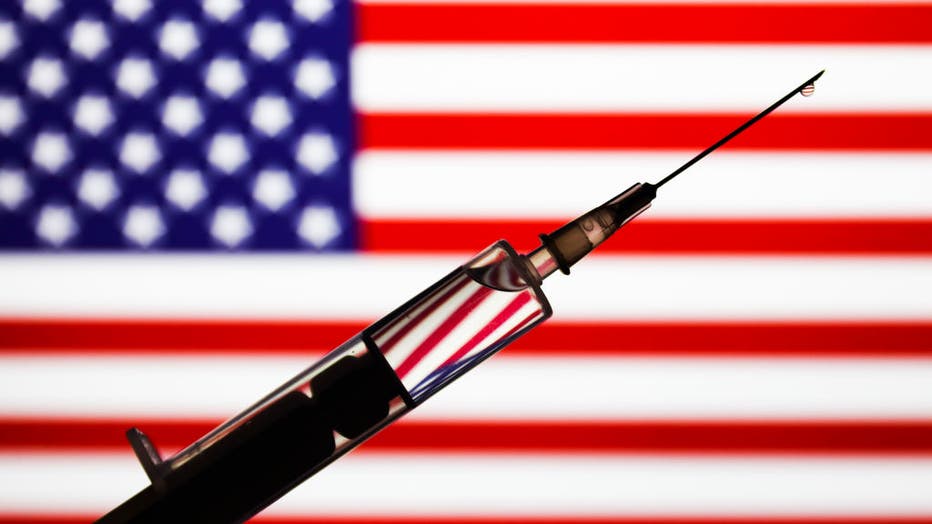 Medical syringe is seen with American flag in the background in this illustration photo taken in Poland on November 23, 2020. (Photo by Jakub Porzycki/NurPhoto via Getty Images)

One-third of the delayed doses have already been delivered, Dr. Anthony Fauci, the nation's top infectious disease specialist, announced Sunday. The White House anticipates that remaining delayed doses will be injected by March 1 and that the daily pace of vaccinations will continue to climb.

Much of the increase, according to data from the Centers for Disease Control and Prevention, comes from people receiving their second dose of the Moderna or Pfizer vaccine. The pace of first-dose vaccinations, meanwhile, has been largely steady over the past several weeks, hovering around an average of 900,000 shots per day.

RELATED: What's safe to do after a COVID-19 vaccination? Keep your masks handy

Increasing both the rate of first-dose administrations and the rate of overall vaccinations will be key to achieving herd immunity — estimated to require vaccination of about 80% of the population — in hopes of ending the pandemic and curtailing the emergence of potentially even more dangerous "mutant" strains of the coronavirus.

That means keeping demand high. The administration has expressed concerns about public surveys showing that tens of millions of Americans are reluctant to get the vaccine and it is stepping up public outreach to overcome that hesitancy as the U.S. death toll nears 500,000 — "a terribly historic milestone in the history of this country," as Fauci put it, and "we’re still not out of it."

Dr. Cyrus Shahpar, the White House COVID-19 data director, said in an interview that the administration is "focused on going out to communities and making sure people know these vaccines are safe and how they can get them, with a goal of vaccinating nearly all Americans,."

The administration has also turned its focus toward identifying new delivery paths for the vaccines beyond those already used by states, including federally run mass vaccination sites, smaller community health centers and retail pharmacies. The White House's goal is to stand up the sites now so that they will be ready to handle the influx of vaccine in the coming weeks.

The Pentagon, at the request of the Federal Emergency Management Agency, has started deploying thousands of active-duty troops to open mass vaccination centers across the country, with plans in place for as many as 100 sites capable of delivering 450,000 doses per day. The first of those facilities opened this past week in California, with locations in Texas and New York due to open in the coming days.

"We always knew along the way we would have to provide predominantly federally supported sites," FEMA's acting administrator, Robert Fenton, said this past week, describing the initial locations as a "pilot" for the larger deployment. "These will continue to grow as supply comes onboard."

The administration also rolled out the federal pharmacy program that had initially been announced by the Trump White House. It has delivered doses directly to chains such as CVS and Walgreens, leveraging existing distribution chains for injections like the flu vaccine.

Governors, along with the CDC, identified specific retail chains to begin administering the vaccines in their states, with an eye on reaching underserved communities and also testing the pharmacies’ capacity to scale up injections.

In its first four days of operation, with about 15% of pharmacies nationwide participating, the pharmacy program administered more than 700,000 of the initial 1 million doses per week allotted by the federal government. That led the White House to quickly double it to 2 million doses this coming week.

Further increases are likely, as the White House monitors the pharmacies' capacity to deliver injections. The National Association of Chain Drug Stores estimates its members alone have the capability to deliver more than 3 million doses per day.

The additional federal channels for delivering inoculations have drawn some grumbling from governors who want even more vaccines to flow through their state allocations. That figure has risen from fewer than 9 million doses per week to 13.5 million in Biden’s first weeks in office.

"Everyone wants more vaccines," said Gov. Gretchen Whitmer, D-Mich., "I do know that the continuous increase is great news for all of us."

"The more ways we can bring the opportunities online the better," she added.