Historic ferry between Maryland and Virginia shut down

White's Ferry closed down on Monday after 200 years of operation.

Historic ferry shuts down after more than 200 years

After a decade of litigation, White's Ferry closed on Monday.

The Circuit Court of Loudoun County, Virginia has ruled, in the case of Rockland Farm, LLC, et al. v. White's Ferry, Inc., that no public landing exists on the Virginia shoreline at White's Ferry Road and the ferry is prohibited from landing at that location in Virginia," stated a post Monday morning on the White's Ferry Facebook page. 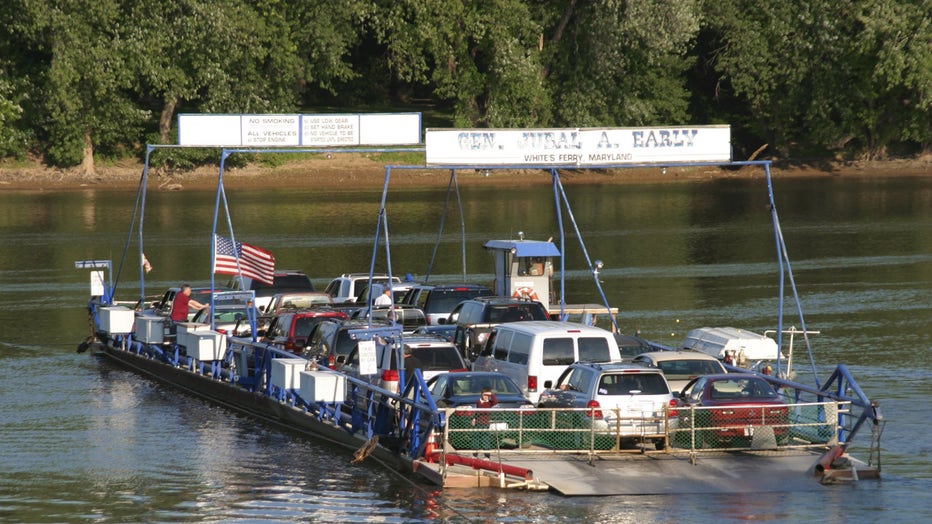 FILE: A file image shows vehicles being transported at White’s Ferry across the Potomac River in 2005. (Photo by: Jeff Greenberg/Universal Images Group via Getty Images)

Attorneys for White’s Ferry told FOX 5’s Ayesha Khan that they had already been temporarily closed due to high water.

The original plan was to keep the ferry going for a few more weeks while the order was still working its way through the court, but attorneys said that White’s Ferry did not want to put in the time and effort to clean up the mess and open it back up, only to shut it down again.

READ MORE: Virginia judge rules portraits of mostly white judges in courtroom must be taken down for black defendant

They attorneys also said that Monday’s shutdown is a result of a decade-long battle in court, where the Loudoun County Circuit Court has ruled that no public landing exists on the Virginia shoreline at White’s Ferry Road – that’s why a ferry is prohibited from landing at that location.

Meanwhile, some people in Poolesville said that shutting down the ferry is a disservice to those who rely on it.

"My goodness how can somebody go somewhere and say that you cannot land there anymore or that you don’t have a ramp?" asked Joseph Buell, "it’s been going on for that long and it doesn’t make any sense."

"There is a lot in this small town and when you take away a main staple like that, it effects everyone," said Joy Zucker-Tiemann.

Libby Devlin, the general manager of Rockland Farm in Loudoun County said they have made several attempts to try and work with White’s Ferry’s owners and to come to some type of a resolution but so far they said, they haven’t been successful.

In a statement to FOX 5, Larry Lawrence Schonberger for White’s Ferry said:

"On April 10, 1871 Loudoun County, Virginia, by condemnation, established a public ferry landing at "White’s Ferry" in Virginia. The 1871 case record does not include a plat showing the location of the public landing. In the recently decided case, Rockland Farm, LLC, et al. v. White’s Ferry, Inc., the Circuit Court of Loudoun County, Virginia ruled in its November 23, 2020 opinion letter that it was not able to determine the location of the landing established by the 1871 condemnation "to a reasonable degree of certainty" and therefore White’s Ferry was trespassing and enjoined from continuing to land on the Virginia shoreline.
In January 2017, while the case was pending, White’s Ferry, Inc., attempted to get Loudoun County to intervene in the matter and the Loudoun County Attorney’s Office was provided with a Motion seeking to have the County become a party to the litigation to protect the public interest in the landing. Loudoun County did not attempt to intervene and did not become a party to the litigation.
Since the Loudoun County Circuit Court has ruled that it cannot determine to a reasonable certainty that a public landing was established at the current location in use as a ferry landing, and Loudoun County, with knowledge of this controversy since at least 2017, has declined to establish a public landing at that location, White’s Ferry is ceasing operation."

Supervisor Caleb A. Kershner, who was elected to represent the Catoctin District on the Board of Supervisors in November 2019 said that this is a private dispute and that the county is not a party in the matter. Meaning, even if it came down to eminent domain, it’s not something that the county would want to take an action with.

He said that the county remains concerned about the outcome from a regional transportation perspective, impacting many residents and people who work in Loudoun County.

In addition, Kershner said that the county has on numerous occasions attempted to engage Montgomery County officials to discuss and move forward with the funding and building of a bridge crossing between the two states but that Montgomery County has not come to such an agreement.

On Monday evening, town leaders in Poolesville held a meeting about the ferry’s future.

Town Commissioner Jim Brown said owners of White’s Ferry were part of it.

"They’re going to keep their employees paid for at least a month while all of us try to work to a resolution on this," Brown said.