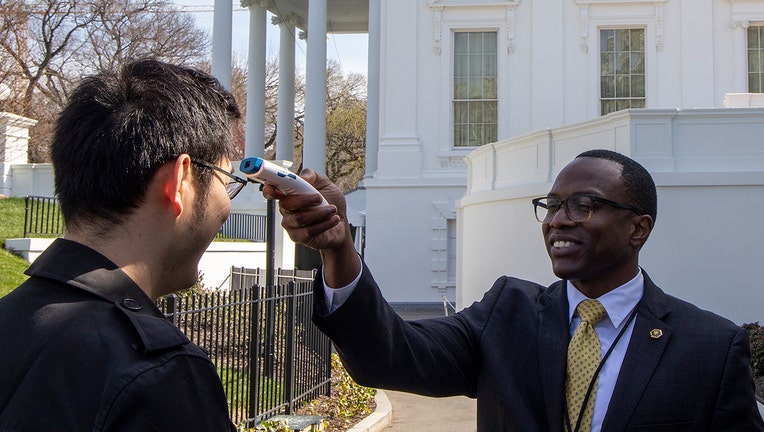 WASHINGTON - The White House announced Saturday that it is now conducting temperature checks on anyone who is in close contact with President Donald Trump and Vice President Mike Pence.

The move is being taken out of an abundance of caution in response to the coronavirus outbreak, said Judd Deere, a White House spokesman.

Trump has had multiple direct and indirect contacts with people who have tested positive for the pandemic virus. On Friday, he declared a state of emergency as schools and workplaces across the country shuttered, flights were canceled and Americans braced for war against the health threat.

Trump spent time last weekend at his private club in Florida with at least three people who have now tested positive.

The Brazilian Embassy in Washington announced late Friday that the country’s chargé d’affaires, Nestor Forster, tested positive after sitting at Trump’s dinner table. So, too, have a top aide to Brazilian President Jair Bolsonaro and an individual who attended a fundraiser Sunday with Trump, according to two Republican officials who spoke on condition of anonymity in order to discuss private health matters.

Trump has been known to flout public health advice — and was eagerly shaking hands during an event Friday — but acknowledged he “most likely” will be tested soon. The White House physician has indicated that Trump’s interactions were low risk and testing was not necessary.

A representative from the White House physician’s office took the temperate of members of the media who were at the White House on Saturday, going around to each person and putting the device to their heads. A reporter with a suspected elevated temperature was not allowed into the briefing room for a news conference with Trump and Pence about the outbreak..

Public health officials say that individuals with a cough and elevated temperatures of 100.4 degrees or higher are deemed concerning.

Tune in to FOX 35 News for the latest on the coronavirus as the amount of cases nationwide increase.