WASHINGTON - Amid the push to “reopen,” President Donald Trump is confronting cases of the coronavirus in his own home as the White House on Monday began requiring staffers to wear masks when entering the West Wing.

Two known cases of COVID-19 among staffers in one of the most-protected complexes in America have sent three of the nation's top medical experts into quarantine and Vice President Mike Pence into “self-isolation.”

A memo sent Monday to White House staff said "everyone who enters the West Wing to wear a mask or facial covering.”

Staff will not be required to wear a facial covering while at their desks if they're socially distanced from colleagues, but people are to avoid unnecessary visits to West Wing, the memo said.

Trump himself is still not expected to wear a mask.

The scare comes as the White House this week is emphasizing to the American people the steps being taken to assure their safety — in hopes that will coax them to resume normal activities.

“This week - you’ll hear the @WhiteHouse talk about preparedness & confidence,” tweeted Alyssa Farah, the White House director of strategic communications. “The Trump Admin is working around the clock to build our testing capacity, grow our PPE stockpiles, distribute therapeutics, & get $ to states to SAFELY reopen in a way Americans can have CONFIDENCE in.” 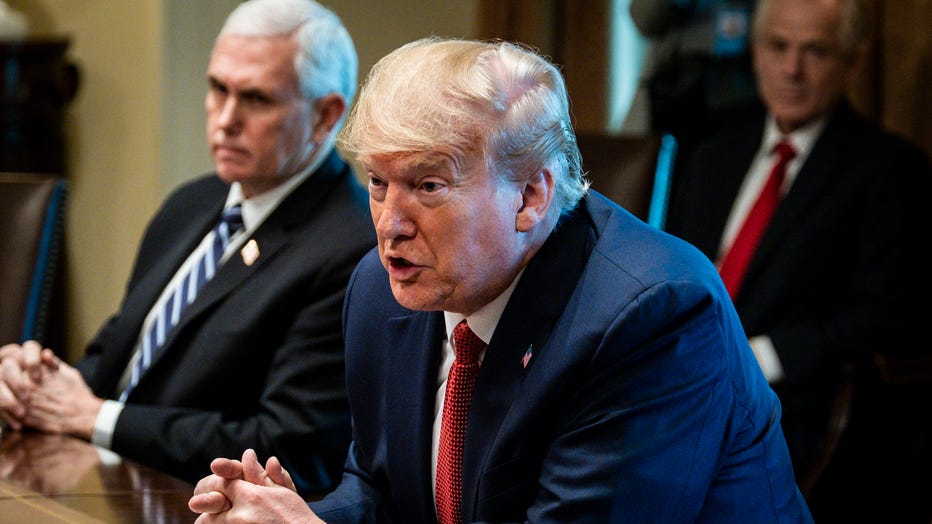 President Donald Trump meets with supply chain distributors in reference to the COVID-19 coronavirus pandemic, in the Cabinet Room in the West Wing at the White House on March 29, 2020. (Photo by Pete Marovich-Pool/Getty Images)

Yet, that message was undercut by the exposure of senior government officials to positive cases at the White House itself.

Pence on Monday led the White House's weekly call with governors from an isolated room, after his press secretary tested positive Friday. Dr. Deborah Birx and other staffers participated as usual from a conference room in the Situation Room, Pence said, explaining the “slightly different circumstance.”

“We are taking the appropriate countermeasures to protect the president’s health," Pence added, according to a recording obtained by the AP. The White House was moving to daily testing of some staff members to detect the disease.

The stepped-up protective measures come as Dr. Anthony Fauci, the director of the National Institute of Allergy and Infectious Diseases, Dr. Robert Redfield, director of the CDC, and the commissioner of the Food and Drug Administration, Dr. Stephen Hahn, were all quarantining after exposure to the White House staffer.

The three experts are scheduled to testify before a Senate panel Tuesday on “Safely Getting Back to Work and Back to School." However, they, along with committee chairman Lamar Alexander, R-Tenn., will all participate remotely. Alexander is quarantining after a staff member of his own tested positive for COVID-19.

The images of top administration officials taking such precautions come as states seek to loosen economic restrictions put in place to mitigate the virus’ spread.

Trump on Monday was complaining that Democratic governors were too slow in lifting restrictions in their states.

“The great people of Pennsylvania want their freedom now, and they are fully aware of what that entails,” he tweeted. “The Democrats are moving slowly, all over the USA, for political purposes. They would wait until November 3rd if it were up to them. Don’t play politics. Be safe, move quickly!”

Trump was scheduled to travel to the state on Thursday, according to advisories from the Federal Aviation Administration.

Alongside Trump's encouragement to reopen, the administration moved Monday to address significant death rates in nursing homes and other senior care facilities. On the call with governors, Pence and Birx recommended that every occupant and staffer be tested for COVID-19 in the next two weeks, with vigilant monitoring going forward, especially of staff.

Decisions about how fast to reopen are being made with the general election less than six months away, and Trump and other incumbents facing it in the midst of a public health and economic crisis.

Mnuchin was one of several economic advisers the White House dispatched on Sunday to place the focus on the merits of loosening restrictions on the economy. Yet attention to possible risks of infection also turned to how the virus even found its way into the White House.

Fauci’s institute said he was “taking appropriate precautions” to mitigate the risk to others while still carrying out his duties, teleworking from home but willing to go to the White House if called. Officials said both Redfield and Hahn will be self-quarantining for two weeks.

Pence’s press secretary, Katie Miller, tested positive for the coronavirus on Friday, making her the second person who works at the White House complex known to test positive for the virus in the past week. A military service member who acts as a valet to the president tested positive on Thursday, the first known instance for a person in close proximity to Trump at the White House.

The announced precautions contrast with a president who has declined to wear a face covering in meetings at the White House or at his public events.

Kevin Hassett, an adviser to Trump and the former chairman of the Council of Economic Advisers, acknowledged Sunday it’s “scary to go to work” in the White House, calling the West Wing a “small, crowded place. It’s, you know, a little bit risky.”

Hassett said he wears a mask when necessary and practices “aggressive social distancing.” Appearing on CBS’ “Face the Nation," he said any fears are tempered by frequent testing, access to an excellent medical team and his belief that this is a time “when people have to step up and serve their country.”