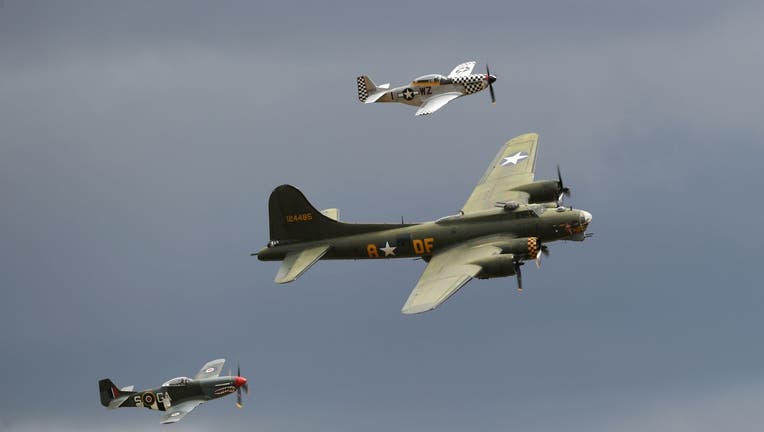 The UK's last airworthy B-17 Flying Fortress 'Sally B' is flanked by a pair of Curtiss P-40 Warhawk's during the Flying Legends Air Show at IWM Duxford. (Photo by Joe Giddens/PA Images via Getty Images)

WASHINGTON - Bad weather has postponed the flyover of dozens of vintage planes over the skies of the D.C. area Friday to celebrate the 75th anniversary of the end of World War II.

Dozens of vintage planes will take to the skies over the D.C. area Friday to celebrate the 75th anniversary of the end of World War II.

The “Arsenal of Democracy Flyover” event was scheduled to begin at 10 a.m.; followed by the first formation’s arrival over the National Mall at 11:30 a.m.

The flyover has been rescheduled for Saturday. More details are expected.

The flyover’s origional itinerary was as follows:

- The Arsenal of Democracy aircraft will proceed to a holding point about 10 miles west of Leesburg where they will begin the flight down the Potomac River towards D.C.

- As they approach the Lincoln Memorial, they will turn East and proceed down Independence Avenue.

- At the completion of the flyover of the WWII Memorial, the aircraft will turn south and begin their flight down the Potomac River and back to their original airports.

The flyover will incorporate and estimated 60 American, British, and Allied jets in honor of veterans, and to inspire young people.

Some of the historic aircraft expected to participate include the P-40 Warhawk, P-39 Airacobra, P-51 Mustang, P-47 Thunderbolt, F4U Corsair, B-25 Mitchell, B-17 Flying Fortress, B-29 Superfortress, and others.