Enforcement on social distancing in the District

How are the authorities in DC enforcing social distancing guidelines.

WASHINGTON - People packed the National Mall during the Blue Angels and Thunderbirds flyover Saturday, and some photos and video from the scene indicated that they ignored social distancing guidelines. 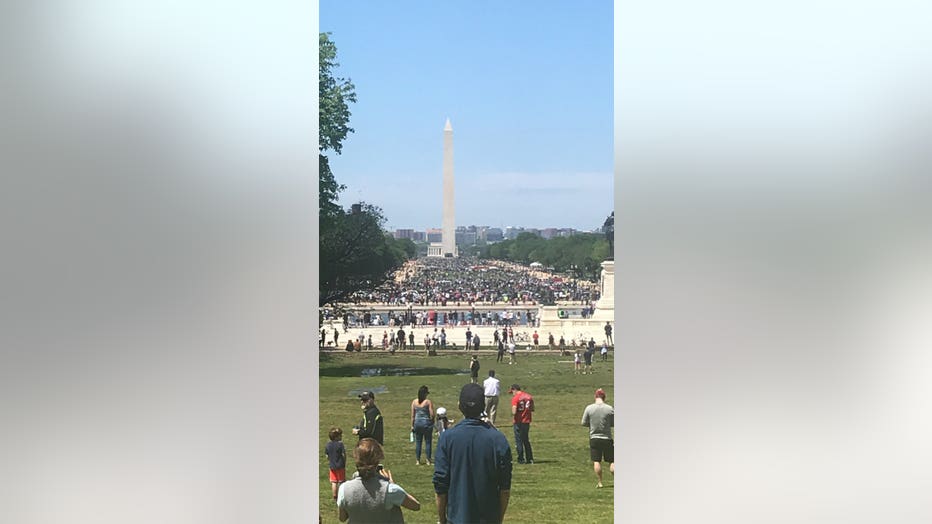 Spectators throughout the DMV were on hand to watch the Blue Angels and Thunderbirds fly over.

Washingtonians posted photos and videos of the crowds, which arrived on a picture-perfect Saturday.

A spokesman for the National Park Service said that they did not believe the gatherings were so congested that should cause concern.

Here's a video a woman with the handle @ever.mynn posted to Instagram:

There are now more than 47,000 confirmed COVID-19 cases in our area. Maryland alone reported more than 1,000 new cases Friday.

Eater DC captured people drinking on the patio at Red Light Bar on 14th Street Northwest Saturday afternoon. There appeared to be people sitting at an outdoor table with a wine glass on it in a photo, but the restaurant's owner Aaron Gordon says the bar did not serve anyone drinks to be consumed on the patio.

Gordon told FOX 5 people gathered on the patio as they were waiting for to-go orders, and that some may have been drinking beverages bought nearby. He said to ensure people don't sit on the patio moving forward the bar and restaurant has since stacked the chairs.

FOX 5 asked DC Police and the mayor's office Sunday about the crowds over the weekend and what enforcement measures have been in place and did not receive a response.