Mike Thomas has the FOX 5 Weather forecast for Monday, January 24

WASHINGTON (FOX 5 DC) - It is hard to believe that we started the first two days of the New Year in the 60s, isn't it? Since a major pattern flip that first week of January, over a foot of snow has fallen in D.C.

If this number holds through the end of the month, it would make it our coldest January in six years, since January 2016. And more incoming cold before the end of the week could help us to hit that mark. 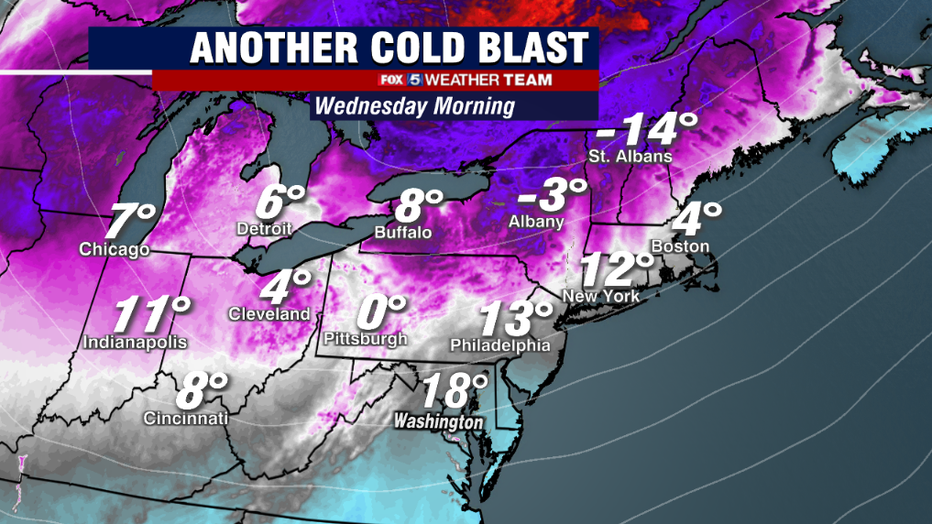 Yet another arctic front will cross our region on Tuesday evening, bringing with it gusty winds and the threat for some scattered snow showers and flurries.

Behind it, another round of very cold temps will settle into our region for the middle of the week. Wednesday is likely to be the coldest day, with morning lows in the teens, and wind chills in the single digits to start the day.

Afternoon temperatures for most will be in the 20s.

Thursday will have a similar start, with widespread teens once again, though some may break the freezing mark by Thursday afternoon. By Friday, most will be above freezing, but another front will cross the region on Friday to bring in another round of cold for the weekend. 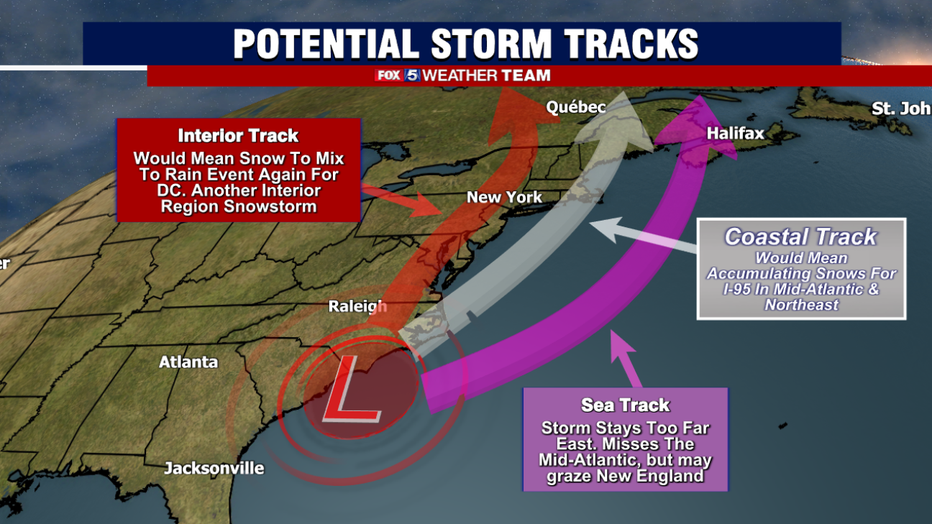 Then we find ourselves in a very familiar situation come the weekend, with the threat of yet another storm coming up from the south and impacting the Mid-Atlantic and Northeast sometime in the Friday Night to Saturday time frame.

If this sounds familiar, that is because we were in this exact same situation last week, watching a potential storm on this past Saturday.

That storm did indeed happen, but it stayed too far to our south and east. The Norfolk, VA area ended up getting over half a foot of snow from the storm however, and parts of the Carolinas received their biggest snow in years.

The storm this weekend has similar threats. It has the potential to bring us a significant snowfall, it has the chance to miss us completely.

Or it has the chance to bring us something in between. We honestly will not know what solution is more likely until we get a few more days of model guidance under our belt. We simply want to inform everyone that we do have our eyes on the risk this weekend, and are watching it for you. 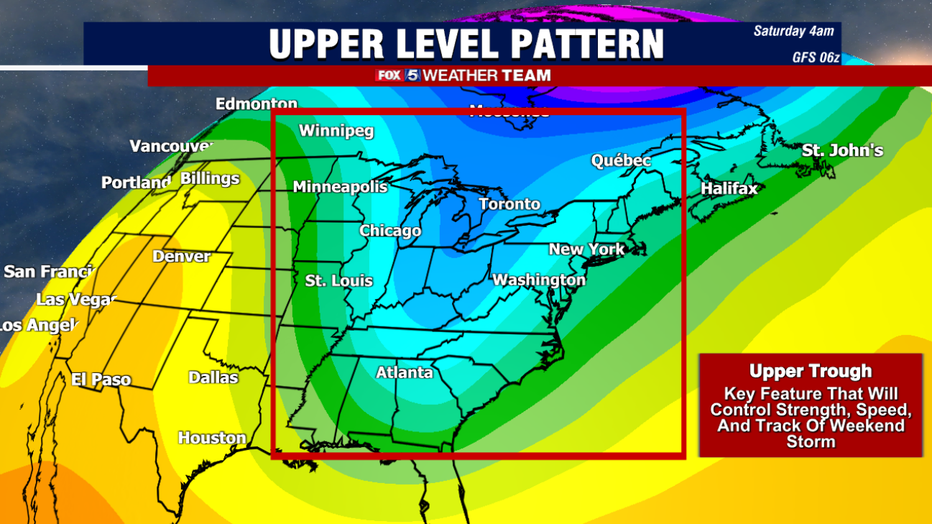 The big question all center around a feature in the upper levels of the atmosphere, known as an upper level trough. Storm energy rotates around these features, and they help control the speed, the strength, and the track at which a storm moves.

The "depth" and "tilt" of this feature is what forecasters really look for. A negatively tilted trough …that is one that is angled from northwest to southeast…makes it more likely that a storm will turn up the coast.

A positively tilted one…so angled from northeast to southwest…makes it more likely that the storm will take more of an eastern track, as was the case this past weekend. Right now, there is a wide range of models that all show different solutions, but this the key feature we will be closely monitoring in the days ahead. 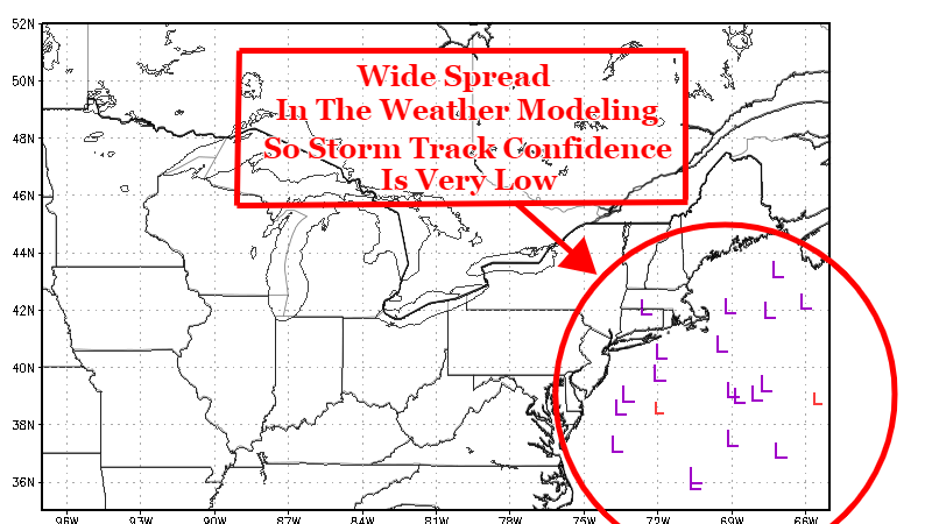 Another feature weather forecasters often use in the extended range is a forecast tool called an ensemble. This is a weather model that is run a number of times over and over again, with each time trying to account for various "typical errors and biases" that are often seen in a typical computer simulation on what the weather will be. For this weekend, there is remarkable agreement on not just a storm, but a strong storm developing on Saturday.

In the image above, the number of purple "L" you see all correspond to strong, nor'easter level storms in the vicinity on Saturday. Indeed, most forecasters agree that there will be a storm that forms. But as you can see by the scattered nature of those Ls, there is extremely low confidence on the track.

An eastern track means, similar to last Saturday, the storm stays to our east and the D.C region sees little if any snowfall at all. If the storm tracks closer to the coastline however, things do get much more likely that we would be dealing with another accumulating snow event here in D.C. 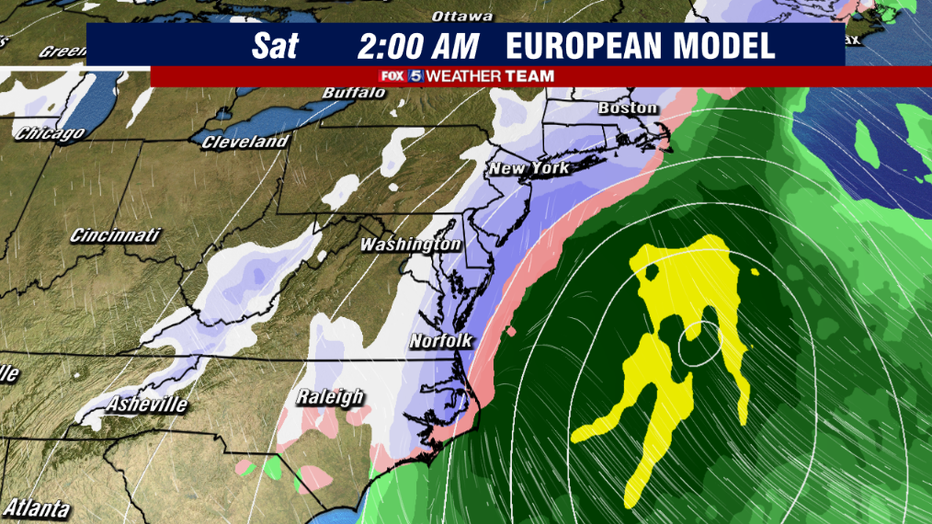 The morning runs of the major weather models showed this uncertainty as well. The European model, shown above, took the eastern root.

This grazed the coastline with some light accumulating snows, just like the storm from this past Saturday, before turning northwest towards New England, where it ramped up to a full on winter storm. Such a track would only have minor, if any impacts for the DC region, as the storm would stay too far out to sea to do us any harm. 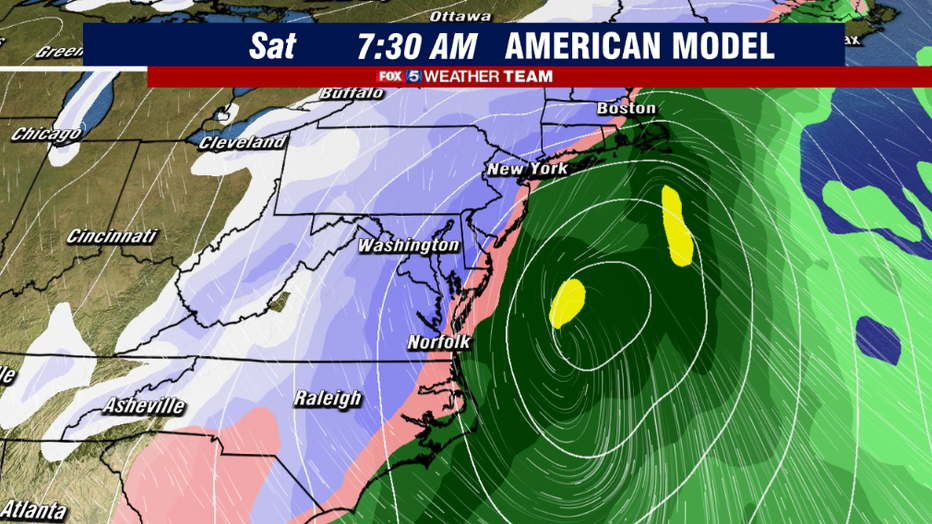 On the other side of things, its counterpart the American Model this morning was hugging the coastline a little closer, and therefor above to get some heavier snows back toward the I-95  region.

Now we need to mention that each of these weather models runs several times a day, and so far each run has shown varying solutions. Nothing has "locked in" as we often say in the weather community. So more changes and shifts are still likely in the days ahead.

To sum it up, there is very likely going to be a storm this weekend, BUT what remains uncertain is whether that storm will impact our region directly, or get directed on our region. We just wanted to let you know that this is a time period that we are keeping an eye on.

At this early stage, chances are about equal that we get something as they are that we get nothing at all. Keep it turned right here, and we will continue to bring you updates throughout the week ahead.