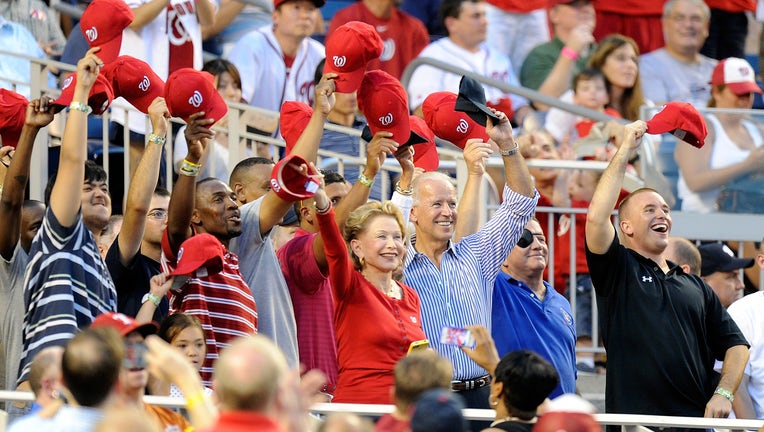 Then-Vice President of the United States Joe Biden waves to the crowd during a military salute in between innings of the game between the Philadelphia Phillies and the Washington Nationals at Nationals Park on July 31, 2012 in Washington, DC. (Photo

WASHINGTON - President-elect Joe Biden may already have one date on his calendar in the early months of his future administration:

The Washington Nationals announced Saturday night that the team is looking forward to having Biden throw out the first pitch on Opening Day next season:

"We're excited to continue the long-standing tradition of sitting presidents throwing out the first pitch of the home of the national pastime in our nation's capital," The Nationals tweeted.

The team announced the news the same night Biden declared victory in the 2020 election, and promised to unite the country after a turbulent year defined by the coronavirus pandemic and political division.

Biden's supporters celebrated in the streets long into the night in cities across the country, including the nation's capital.

A longtime Delawarean who was born in Scranton, Pa., Biden is a Phillies fan.

But President Trump broke the tradition of presidential first-pitches, both on Opening Day and at the World Series.

Nationals fans famously booed Trump during the one World Series game he did attend last year in the nation's capital.