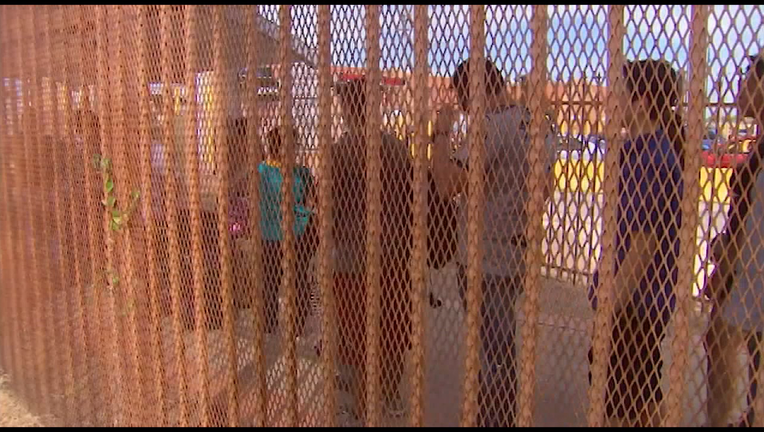 SACRAMENTO, Calif. - A bill that would have blocked California state prisons from transferring inmates to federal immigration custody was failing as lawmakers prepared to adjourn Wednesday.

Gov. Gavin Newsom vetoed similar legislation in 2019, saying then that it could "negatively impact prison operations." It also faced stiff opposition from law enforcement organizations, with the California Police Chiefs Association calling it "a major threat to public safety."

State law prohibits local police and sheriffs from cooperating with U.S. Immigration and Customs Enforcement for some crimes, but it doesn’t apply to the prison system.

The state transferred more than 1,400 inmates to immigration authorities in 2020, according to the Asian Prisoner Support Committee, an advocacy group.

Illinois, Oregon, and Washington, D.C., have already ended such transfers, as have at least eight California counties.

The practice drew attention after inmate firefighters risked their lives but were turned over to ICE after their parole.

"Whether you are an American citizen or … a refugee, if you have served your time you have a right to be treated equally in the state of California," Democratic Assemblywoman Wendy Carrillo argued in support of her bill in advance of the Senate’s consideration. But she said the state’s current policy "has created a dual justice system" that allows for deportations.

Her bill cleared the Assembly last year but stalled in the Senate on a 18-13 roll call, short of the 21 votes it needed to pass. Four Democrats joined nine Republicans in opposing the measure. It now returns to the Assembly for a final vote before going to Newsom.

MORE: California man who served 25 years poised to be deported to Cambodia

Supporters in the Senate said it’s unfair that inmates who have served their time are subjected to more punishment because they are not citizens. Many are U.S. residents who fled Southeast Asia as children with their families after the Vietnam War and landed in impoverished and violent neighborhoods, they said.

"Yes, they made mistakes as young people and they were incarcerated and punished but have transformed decades later," said state Sen. Richard Pan. "It’s time to end this violence against the AAPI community."

State Sen. Scott Wiener, D-San Francisco, said the California Department of Corrections and Rehabilitation is being "incredibly arrogant" and basically "flipping us the bird" when lawmakers and voters have the power to set sentences for crimes.

"They paid their debt to the state of California, they did their time," Wiener said.

"We do have a broken immigration system and we have a Swiss cheese criminal legal system and generally the people who fall through the holes of that Swiss cheese, they are Black, they are brown, they are Filipino, they are Korean, they are poor, they are indigenous," said Sen. Sydney Kamlager

A Senate amendment makes it clear that state-run anti-crime task forces can still work with federal immigration authorities if the primary purpose of the task force is not immigration enforcement. But the police chiefs’ association said that doesn’t go far enough to protect daily collaborations, and fears a provision that would allow anyone to sue law enforcement agencies for violations.

"Allowing lawsuits against a police department who works with federal agencies to apprehend a human trafficking suspect just because the suspect is undocumented is flat out dangerous," the association’s president, Chris Catren, said in statement. He said the provision would "compromise hundreds of ongoing operations."

More than 300 faith leaders signed a letter supporting the bill, which also had the backing of United Farm Workers co-founder Dolores Huerta during an online news conference before the Senate’s consideration.

"What is happening right now is totally inhumane. This is double jeopardy," Huerta said.

The bill’s supporters held it out as another litmus test for Newsom, a Democrat frequently mentioned as a possible presidential contender despite his frequent statements that he lacks interest.

Salvador Sarmiento, legislative director for the National Day Laborer Organizing Network, said the measure "is a test whether Gavin Newsom is the type of leadership the country needs right now."

Organizations representing police chiefs, sheriffs and rank-and-file officers opposed the legislation. The Peace Officers Research Association of California said the bill would put "local law enforcement in a no-win situation, having to choose between state and federal laws."

State corrections officials estimated that if the bill becomes law it could cost the state an additional $22 million a year to supervise more than 2,500 parolees who otherwise would have been deported.