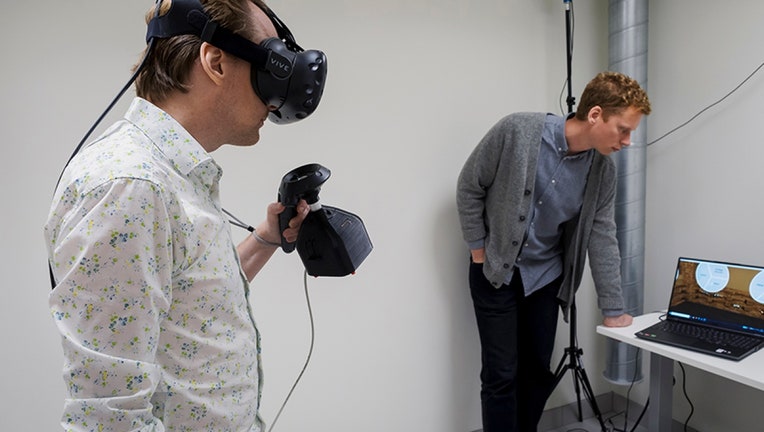 STOCKHOLM, Sweden - A new gaming console could not only transform your eyes into virtual reality but also your nose.

Developers between Stockholm University and Malmö University said they have come up with an odor machine, or "olfactometer," that makes it possible to smell in virtual reality environments.

The research was recently published in the International Journal of Human - Computer Studies.

RELATED: TikTok algorithm mystery: What we know, and don’t know, about the Chinese government's control of the app

Researchers tested out the new technology in a "wine testing game" where the user smelled wine in a virtual wine cellar and received points if the guesses on the different aromas were correct.

The gaming console has four different valves with each one connected to a channel. A fan used for sucking air into a tube is in the middle. Using a computer to help, the player can control the four channels that can open to different degrees and provide different mixtures of scents.

Actor Matthew McConaughey joined a group of seniors from The Enclave at Round Rock Senior Living community in Round Rock, Texas.

"The possibility to move on from a passive to a more active sense of smell in the game world paves the way for the development of completely new smell-based game mechanics based on the players' movements and judgments," Simon Niedenthal, interaction and game researcher at Malmö University, said in a news release.

But researchers hope the technology will be used for other purposes.

Virtual reality — computer generated 3D environments that can range from startlingly realistic to abstract wonderlands — has been on the cusp of wide acceptance for years without ever really taking off.

The pandemic should have been VR’s big moment, offering an escape for millions of locked-in households. Special headsets and gloves let people interact with a 360-degree, three-dimensional environment, seemingly a good fit for people stuck indoors. But consumers preferred simpler and more accessible tech like Zoom, Nintendo’s Switch and streaming services like Netflix.

But consumers have balked at the hardware’s expense: a headset costs several hundred dollars, the same price as video game consoles that support hundreds of games. Early VR headsets also lacked a game or service that would make them seem indispensable, like web browsers for consumer PCs or the mobile Internet for iPhones. Headsets’ hefty weight, slow software, and tendency to sometimes cause nausea also kept VR from taking off.