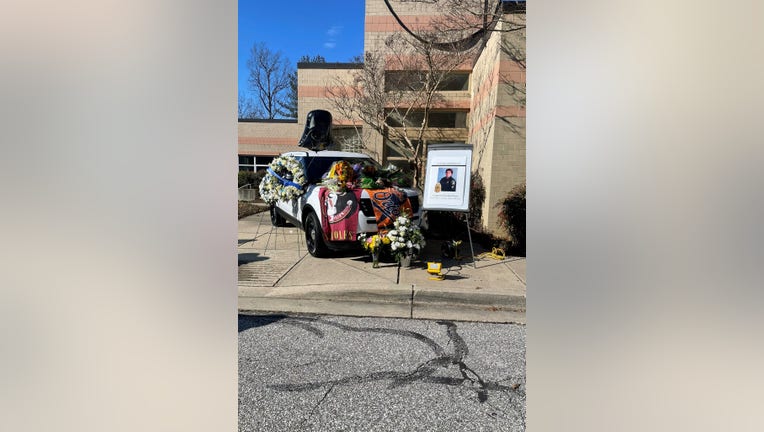 Peters died Thursday after she was hit by a car on January 2nd while responding to a crash in the woods near Edmonston Rd. and Cherrywood Ln.

Officials in Greenbelt held a procession for Peters on Saturday as her body traveled from the medical examiner’s office to a funeral home.

Flags in Greenbelt flew at half-staff. The procession was followed by a vigil at the police department.

RELATED: Greenbelt police officer succumbs to injuries after being struck by vehicle

Chief Rick Bowers told FOX 5 the loss of Corporal Peters is one that can’t be replaced.

"She had a very unique personality and brought a lot of laughter to the organization. She was so beloved. Officers young and old loved Corporal Peters. So she will be deeply missed," he said.

At the center of the vigil was Peters' patrol car. It was decorated with all the things she loved, including the Florida State Seminoles, Baltimore Orioles and Star Wars.

"She was a big Star Wars fan as you can tell by the Baby Yoda," Bowers said.

"She had a unique and quirky personality that everyone loved," former Police Chief Jim Craze said. "She was happy. She was fun to be around. She was a quite a sports fan."

The vigil was organized by members of the community who knew Peters through her dedication to running the Citizens’ Police Academy.

At exactly 1:08 p.m., which was Peter’s’ badge number, there was a moment of silence.

Peters was assisting National Park Police with a traffic accident when she was hit by the car.

The call came in before her shift and she responded while she was on her way to work.

It was something Peters’ wasn’t obligated to do.

"She volunteered to that call. She was the nearest, and to her nature she responded to the call herself. That response resulted in the end of her life," Craze said.

National Park Police are investigating the crash that led to her death and charges are pending.

Peters is survived by her husband and two children.