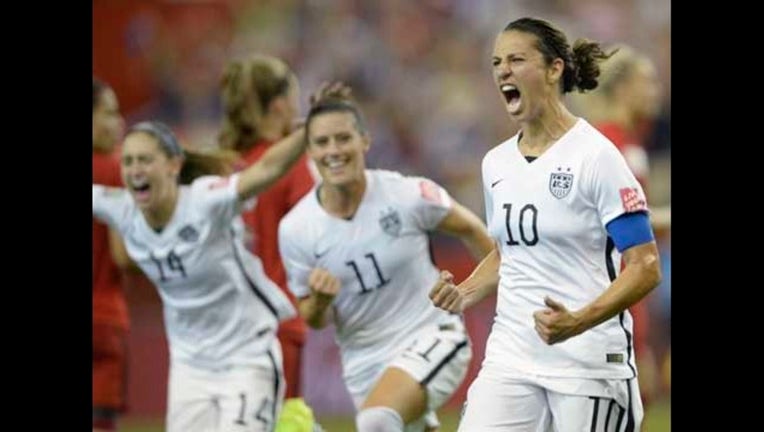 MONTREAL (AP) — Carli Lloyd remembers putting the ball on its spot and shutting out the noise of more than 51,000 anxious fans.

Then she blasted that ball into the back of the net.

Lloyd's penalty kick got the United States on the board, and the Americans went on to a 2-0 victory over top-ranked Germany in the semifinals of the Women's World Cup on Tuesday night.

"That's exactly what I did, shut out everything around me and focused on what I needed to do," she said.

Lloyd's penalty kick in the 69th minute went into the right side of the goal less than 10 minutes after Celia Sasic shot wide on a penalty kick for Germany. Kelley O'Hara came in off the bench and scored in the 85th minute, delighting the pro-American crowd.

Hope Solo posted her fifth straight shutout, continuing a dominant run for the American defense. The second-ranked United States has gone 513 minutes without conceding a goal.

The victory captured the attention of President Barack Obama, who posted his congratulations on his Twitter account. Actor and musician Justin Timberlake also cheered on the U.S., tweeting "USA! USA! USA!!!!!"

Next up for the U.S. is the winner of Wednesday night's match in Edmonton between defending champion Japan, ranked No. 4, and sixth-ranked England. Germany will play the loser of the second semifinal in the third-place game in Edmonton on Saturday.

The final is set for Sunday at Vancouver's BC Place.

"We didn't come here just to make the final," Lloyd said. "We came here to win it, so we're going to go after it."

It was the fourth World Cup meeting between Germany and the U.S. In each of the first three games, the winner went on to take the title.

The marquee matchup led to lines of fans waiting to get in about three hours before the game. The line for the main souvenir stand snaked up a half-dozen ramps to the building's third level at one point.

The stadium built for the 1976 Olympics, where the East German men won the gold medal, was filled nearly to its blue fabric roof, mostly with fans cheering for the United States. The crowd was announced at 51,176.

Previous games in Montreal had the stadium less than half full, with the upper bowl completely empty.

The United States had several good chances from the start. Julie Johnston missed on a header off a corner kick from Megan Rapinoe, and Alex Morgan's breakaway in the 15th minute was stopped by goaltender Nadine Angerer.

There was a scary moment in the first half when Germany's Alexandra Popp and American midfielder Morgan Brian collided in front of the U.S. goal following a free kick from about 25 yards out.

Television cameras caught blood in Popp's hair, and Brian was prone on the field for several minutes. Both players returned to the match.

Sasic's penalty kick came after Johnston fouled Popp in the box. Sasic fooled Solo, who went right, but her kick went wide left, prompting a roar from the crowd.

Sasic went into the match as the tournament's high scorer with six goals.

Shortly thereafter, Annike Krahn got a yellow card for fouling Morgan in the box, but replays showed it occurred just outside. Lloyd's penalty kick was her third goal in three matches.

"Of course, I'm very, very sad about this, that this penalty shot decided the match," German coach Silvia Neid said. "What am I going to do though? A referee decision is something I have to live with. I am very sad about it, but I cannot change it."

Lloyd is known for coming up big in important games. She scored the winning goal in overtime to beat Brazil for the gold medal in the 2008 Beijing Olympics, and scored both U.S. goals in the final of the 2012 London Olympics against Japan. She is the only player to score the winning goals in consecutive Olympic finals.

In the World Cup quarterfinals, she scored the lone goal in a 1-0 victory over China.

The United States tweaked its formation for the match. Morgan started up top, with Lloyd as an attacking midfielder with Rapinoe and Tobin Heath on the wings.

The U.S. had success in its quarterfinal against China when it had Lloyd roaming up top and Brian back as a holding midfielder. The shift paid off with Lloyd's goal on a lofted kick from Johnston.

The United States improved to 3-1 against Germany in World Cup matches and 19-4-7 overall.

"I think inside our environment, we knew we had this in us," coach Jill Ellis said. "We do a good job of blocking out the distractions."

The United States has won two World Cup titles, but none since 1999. The Americans have appeared in the semifinals of all seven of the women's tournaments.

This tournament has played out with FIFA embroiled in scandal.

Blatter's second-in-command, secretary general Jerome Valcke, also will be absent from the biggest event in women's soccer "due to their current commitments in Zurich," FIFA said in a statement Tuesday.