Signing up to receive the coronavirus vaccine is difficult, especially for seniors. A group of women in Montgomery County wants to change that. They call themselves the Vaccine Hunters or Las Caza Vacunas, and they’re coming together to help people 75 and older get the vaccine.

SILVER SPRING, Md. (FOX 5 DC) - Signing up to receive the coronavirus vaccine is difficult, especially for seniors. A group of women in Montgomery County wants to change that. They call themselves the Vaccine Hunters – Las Caza Vacunas, and they’re coming together to help people 75 and older get the vaccine.

"We are not techies," said 80-year-old Maria Carbonell of she and her husband.

The Carbonell’s live in Chevy Chase and said when it came to making a COVID-19 vaccine appointment they didn’t know where to start.

"It [sic] was desperate because we tried so many times. We were on, I think four or five lists, and nobody called," said Carbonell.

So, their daughter contacted the Vaccine Hunters – a group of eight women.

"She called and she said get ready because you have to go to White Oak and be there before 4 o’clock. It was 2 o’clock," said Carbonell while laughing.

They made their appointment and immediately felt relieved.

"We are really really very grateful that this vaccine was developed," said Nelson Carbonell.

The Vaccine Hunters, all teachers, decided to help others when they kept hearing how much trouble people, especially seniors, were having.

They did what teachers do best – got organized.

They created a spreadsheet with all of the county, state, and private COVID vaccination sites – something each health department’s website is lacking.

"It’s like a little handy dandy guide for COVID vaccines," Maria Peterson, one of the Vaccine Hunters, told FOX 5.

And then, they began to take requests from seniors – through Facebook and of course, phone calls."One night we were up until 1 a.m. actually entering people for appointments," said Peterson. 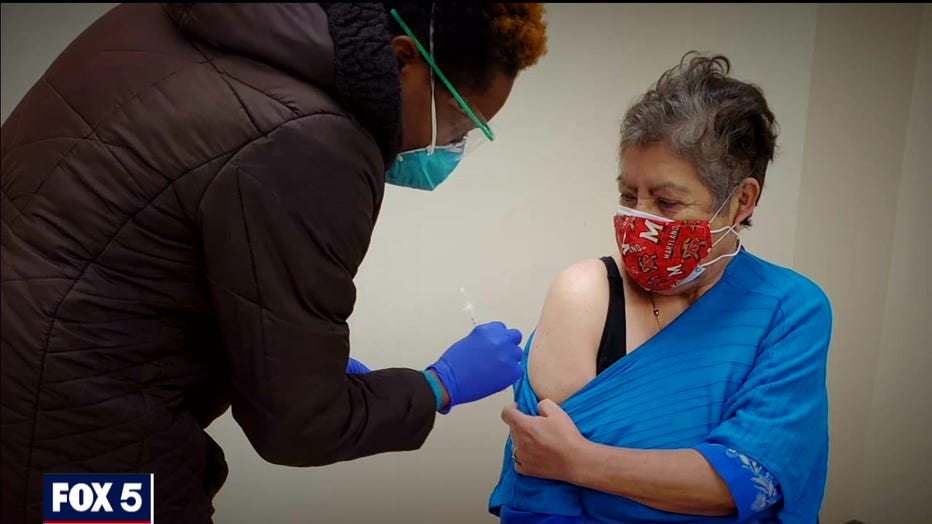 The Vaccine Hunters were able to get 220 people in group 1B vaccination appointments. They also registered 359 people for the waiting list.

They secured the appointments by having multiple browsers open at once and staying on top of when each site’s booking windows opened.

"We would be like, ‘Hey, right now I just saw that Giant opened up.’ So we would all hop on our computers," said Peterson.

Peterson said navigating the different sites can be difficult at times.

"It’s becoming survival of the fittest and not everybody has a computer, not everybody is tech-savvy. A lot of seniors don’t have email addresses," said Peterson.

She also said that even though there are some multilingual directions, the language is too complex and not very easy for seniors to understand.

"We want to work with the county and state to help make the process easier," she said.

Peterson says the government needs to find a way to distribute the vaccine more equitably and make it easier for people in Black and Latino communities to access.

The women have reached out to the state and county and offered to help. They also have a list of volunteers ready to jump in and continue to help seniors get vaccinated. Something Maria and Nelson Carbonell are very grateful for.

"We know that if we get that disease we will die.  So it was like living with death on top of you for a year. It was such a relief to know that you are protected," said Carbonell said.

The couple says they’ve lived in isolation for a year but now have hope all thanks to the Vaccine Hunters.

"We are going to see our great-grandchild on Wednesday," Carbonell said.