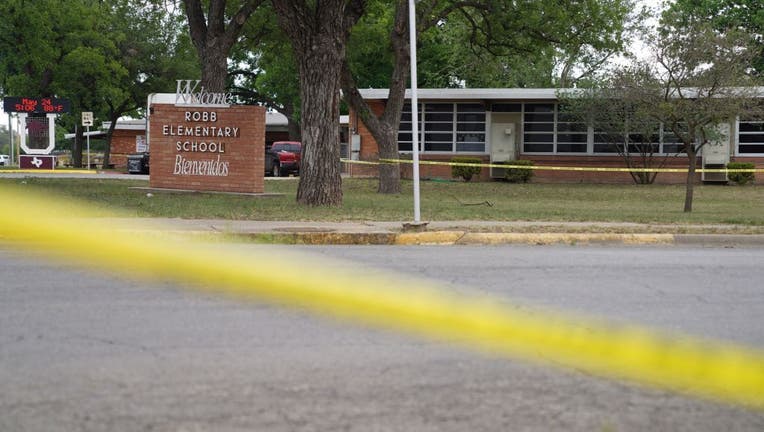 Sheriff crime scene tape is seen outside of Robb Elementary School as State troopers guard the area in Uvalde, Texas, on May 24, 2022. (Photo by ALLISON DINNER/AFP via Getty Images)

AUSTIN, Texas - The Texas school police chief criticized for his actions during one of the deadliest classroom shootings in U.S. history said in his first extensive comments, published Thursday, that he did not consider himself the person in charge as the massacre unfolded and assumed someone else had taken control of the law enforcement response.

Pete Arredondo, the police chief of the Uvalde school district, also told the Texas Tribune that he intentionally left behind both his police and campus radios before entering Robb Elementary School. An 18-year-old gunman killed 19 children and two teachers behind a locked classroom door that the chief said was reinforced with a steel jamb and could not be kicked in.

Poor radio communications is among the concerns raised about how police handled the May 24 shooting and why they didn’t confront the gunman for more than an hour, even as anguished parents outside the school urged officers to go in.

Separately, The New York Times reported Thursday that documents show police waited for protective equipment as they delayed entering the campus, even as they became aware that some victims needed medical treatment.

Arredondo told the Tribune that from the hallway of the school he used his cell phone to call for tactical gear, a sniper and keys to get inside the classroom. He said he held back from the door for 40 minutes to avoid provoking gunfire and tried dozens of keys brought to him, but that, one-by-one, they failed to work.

"Each time I tried a key I was just praying," he told the Tribune.

In the more than two weeks since the shooting, Arredondo’s actions have come under intensifying scrutiny from both state officials and experts trained in mass shooting responses. Steven McCraw, the head of the Texas Department of Public Safety, has said the school police chief, who he described as the incident commander, made the "wrong decision" to not order officers to breach the classroom more quickly to confront the gunman.

Families of victims and survivors of the mass shootings in Buffalo, New York and Uvalde, Texas appeared before a U.S. House committee Wednesday.

But Arredondo, who told the Tribune he believed that carrying radios would slow him down as he entered the school and that he knew that radios did not work in some school buildings, said he never considered himself the scene’s incident commander and did not give any instruction that police should not attempt to breach the building.

"I didn’t issue any orders," Arredondo said. "I called for assistance and asked for an extraction tool to open the door."

Arredondo has not responded to repeated interview requests and questions from The Associated Press.

Arredondo’s account and records obtained by the Times were published Thursday as law enforcement and state officials have struggled to present an accurate timeline and details. They have also made frequent corrections to previous statements, and no information about the police response has been formally released by investigators since the days that followed the attack.

According to documents obtained by the Times, a man who investigators believe to be Arredondo could be heard on body camera footage talking about how much time was passing.

"People are going to ask why we’re taking so long," said the man, according to a transcript of officers’ body camera footage obtained by the newspaper. "We’re trying to preserve the rest of the life."

Sixty officers had assembled on the scene by the time four officers made entry, according to the report. The two classrooms where the shooting took place included 33 children and three teachers.

Matthew McConaughey called for "gun responsibility" in a recent op-ed following the mass shooting that took place in his hometown of Uvalde, Texas. The 52-year-old actor explained the difference between his idea of "gun responsibility" and "gun control" during a press briefing at the White House.

Not all the victims were found dead when officers finally went inside: one teacher died in an ambulance and three children died at nearby hospitals, according to the records obtained by the Times, which included a review of law enforcement documents and video that have been gathered as part of the investigation.

The family of Xavier Lopez, 10, said the boy had been shot in the back and lost a lot of blood as he waited for medical attention.

"He could have been saved," Leonard Sandoval, the boy’s grandfather, told the newspaper. "The police did not go in for more than an hour. He bled out."

The records obtained by the Times offered other new details, including that the gunman, Salvador Ramos, had a "hellfire" trigger device meant to allow a semiautomatic AR-15-style rifle to be fired more like an automatic weapon, but did not appear to have used it during the attack. Ramos had spent more than $6,000 amassing an arsenal of weapons that included two AR-15-style rifles, accessories and hundreds of rounds of ammunition, according to the documents.

The Times reported that some of the officers who first arrived at the school had long guns, and that Arredondo learned the gunman’s identity while inside the school and attempted to communicate with him through the closed classroom doors.

Eva Mireles, one of the teachers who was killed, made a phone call to her husband, a Uvalde school district police officer, during the attack. The documents obtained by the Times show that Ruben Ruiz informed responders on the scene that his wife was still alive in one of the classrooms.

"She says she is shot," Ruiz could be heard telling other officers as he arrived inside the school at 11:48 a.m., according to the body camera transcript obtained by the Times.

By 12:46 p.m., Arredondo seemed to give his approval for officers to enter the room, the Times reported.

"If y’all are ready to do it, you do it," he said, according to the transcript.

About a week after the shooting, department of public safety officials said Arredondo was no longer cooperating with the agency and had not responded to interview requests from the Texas Rangers, the agency’s investigative unit.

Arredondo’s attorney, George E. Hyde, told the Tribune for Thursday’s story that Arredondo could not do an interview on the day the Rangers asked because he was covering shifts for his officers. Hyde said Arredondo is willing to cooperate with the Rangers investigation but would like to see a transcript of his previous comments.

"That’s a fair thing to ask for before he has to then discuss it again because, as time goes by, all the information that he hears, it’s hard to keep straight," Hyde said.