Video shows sandstorm in Utah that led to 20-vehicle pileup

A passing car recorded video of a sandstorm on July 25, 2021, that led to a 20-vehicle pileup in Utah. Credit - Emma Hahne

KANOSH, Utah - At least eight people were killed and several others injured after a weekend sandstorm in Utah caused a 22-vehicle pileup, authorities said.

The crash was reported around 4:30 p.m. local time on Sunday along Interstate 15 near the town of Kanosh, the Utah Highway Patrol said. Officials said a period of high winds that caused a sand or dust storm impaired visibility on the roadway.

Several people were transported to area hospitals in critical condition. Ground and air ambulances were used to transport crash victims.

Five of the seven people killed were in one vehicle, while two others were in another vehicle, and several children were among the dead, Highway Patrol Sgt. Cameron Rhoden told KUTV in Salt Lake City. 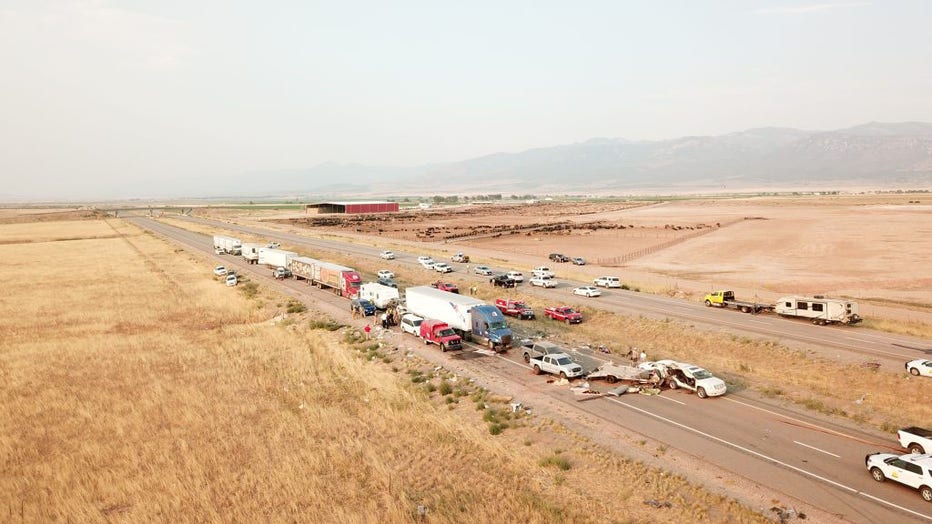 Video of the storm and its impact on visibility was shared on social media.

A 20-vehicle pileup was reported on July 25, 2021, when authorities say high winds caused a sandstorm. Credit - Macy Langston via Storyful

I-15 remained partially shut down late Sunday and traffic was redirected around the crash site.

"We’re stunned and saddened by the horrific accidents in Millard County," Gov. Spencer Cox tweeted Sunday night. "We fervently pray for the loved ones of those who perished and for those fighting for their lives."

Kanosh is located about 160 miles south of Salt Lake City.