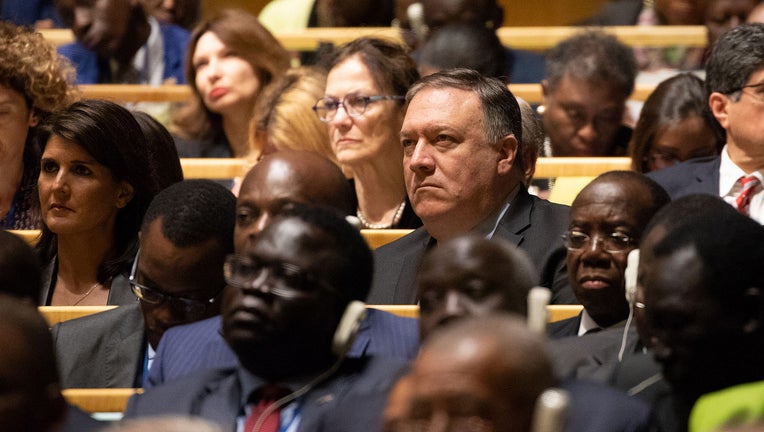 WASHINGTON (AP) -- Sending mixed signals, the U.S. pulled out of a major Saudi investment conference Thursday amid global pressure over the apparent death of journalist Jamal Khashoggi, but Secretary of State Mike Pompeo also said the kingdom should be given more time to investigate before the U.S. lays any blame or considers action.

While Turkish officials have accused Saudi Arabia of the murder in Istanbul of Khashoggi, a U.S.-based writer who has been critical of Saudi leaders, President Donald Trump has cautioned against a rush to judgment against an important Mideast ally. And Pompeo, just back from talks with Saudi and Turkish leaders, said the U.S. needs more facts before deciding "how, or if" to respond.

Meanwhile, after days of speculation, Treasury Secretary Steven Mnuchin announced, "We have decided I will not be participating in the Future Investment Initiative summit in Saudi Arabia." The Saudis had hoped to use the forum, billed as "Davos in the Desert" to boost their global image, but a number of European finance ministers and many top business executives have pulled out as international pressure on Riyadh has intensified over Khashoggi.

Turkish reports say Khashoggi was brutally murdered and dismembered inside the Saudi Consulate two weeks ago by members of an assassination squad with ties to Saudi Crown Prince Mohammed bin Salman. The Saudis have dismissed those reports as baseless but have yet to explain what happened to Khashoggi, who was seen on video entering the consulate but has not been seen since.

Trump has rejected talk that his reluctance to act is providing cover for the Saudis. And a senior U.S. official said Pompeo had warned the Saudi crown prince that his credibility as a future leader was at stake, reflecting the administration's concern about how the case could affect relations.

Pompeo, who returned late Wednesday from an emergency visit to Riyadh and Ankara to impress on senior officials in both nations the need for a credible investigation, said:

"I told President Trump this morning that we ought to give them a few more days to complete that so that we, too, have a complete understanding of the facts surrounding that, at which point we can make decisions about how, or if, the United States should respond to the incident surrounding Mr. Khashoggi."

Pompeo declined to comment on what the U.S. believes might have happened to Khashoggi but made clear Washington takes the situation "very seriously." He said that Saudi leaders, including the crown prince, "assured me that they will conduct a complete, thorough investigation of all of the facts surrounding Mr. Khashoggi, and that they will do so in a timely fashion, and that this report itself will be transparent for everyone to see, to ask questions about, and to inquire with respect to its thoroughness."

He cautioned, however, that whatever response the administration might decide on would take into account the importance of the long-standing U.S.-Saudi partnership. "They're an important strategic ally of the United States, and we need to be mindful of that," he said.

Although Pompeo suggested the U.S. could wait another several days for results of the Saudi investigation an official familiar with his meetings in Riyadh and Ankara said he had been blunt about the need to wrap the probe up quickly. U.S. lawmakers from both parties have expressed outrage over Khashoggi's disappearance and reports of his murder and have been calling for consequences, including possible sanctions against Saudi Arabia.

The official, who was not authorized to publicly discuss details of the private meetings and spoke on condition of anonymity, said Pompeo had told the crown prince that "time is short."

The official also said the Pompeo had warned Prince Mohammed that given the allegations it would be "very difficult for you to be a credible king" without a credible investigation into the case. The crown prince is next in line for the throne, which is held by his ailing, aged father King Salman.