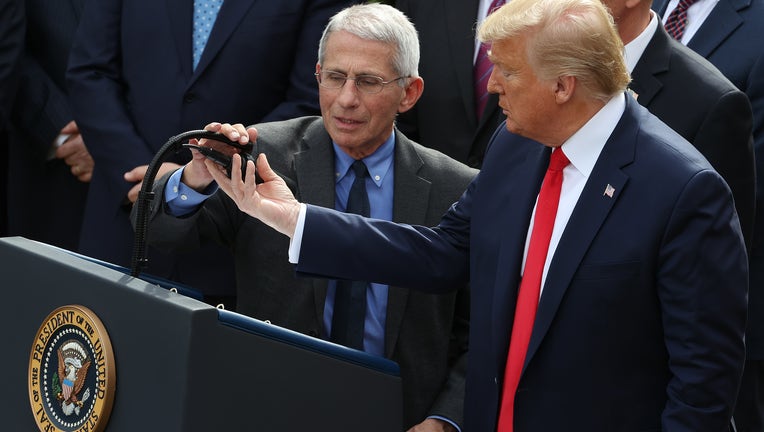 WASHINGTON, DC - MARCH 13: U.S. President Donald Trump adjusts the microphone for National Institute Of Allergy And Infectious Diseases Director Anthony Fauci during a news conference where Trump announced a national emergency in response to the ongo

WASHINGTON - President Trump doesn’t need to be tested for coronavirus, a White House doctor said Friday evening after a second Brazilian official who recently met with the president at Mar-a-Lago tested positive.

“The President’s exposure to the first individual was extremely limited (photograph, handshake) and though he spent more time in closer proximity to the second case, all interactions occurred before any symptom onset,” Conley's statement said. “These interactions would be categorized as LOW risk for transmission per CDC guidelines, and as such, there is no indication for home quarantine at this time.”

Acting Brazilian Chargé d'Affaires Ambassador Nestor Forster has tested positive for the virus, the Brazilian Embassy said Friday, according to The Washington Post.

Fabio Wajngarten, Brazilian President Jair Bolsonaro’s communications secretary, tested positive on Wednesday. He posed for a photo with the president at the event.

Brazilian Sen. Nelsinho Trad, who attended the Mar-a-Lago dinner, also tested positive for the virus, according to a statement from his office Friday evening, Agência Brasil, a state news agency, reported.

Another unidentified guest from a Sunday afternoon Trump Victory event, where the president spoke, also tested positive for COVID-19, The Post reported. It was unclear if the guest had close contact with Trump.

Earlier Friday, Trump told reporters he would “likely” get tested "not for that reason, but because I think I will do it anyway.”

Bolsonaro’s son said Friday that his father -- who was at the Saturday dinner -- had tested negative for the virus hours after Brazilian reports indicated he tested positive.

“The information I have is the results that just came up telling that he is negative for coronavirus," Eduardo Bolsonaro said of his father. "I never listened that it was positive in the first exam. This is something that I don’t know. But, uh, everything’s good now.”

List of school closings due to coronavirus concerns in DC, Maryland and Virginia