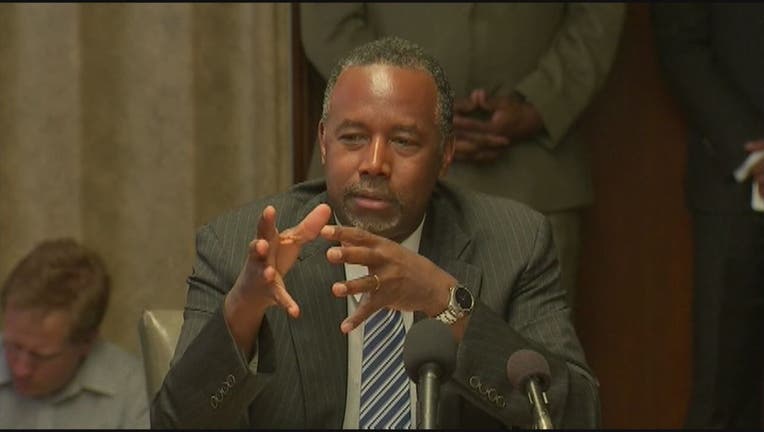 Trump's decision, announced by his transition office, comes as the real estate mogul continues a series of conferences with aides and others -- including unlikely figures such as former Vice President Al Gore -- aimed at forming his administration and its policies. He announced several Cabinet selections last week.

In a statement, Trump said he was "thrilled to nominate" Carson, describing the retired neurosurgeon as having "a brilliant mind" and being "passionate about strengthening communities and families within those communities."

Carson had been coy about joining the new administration, saying shortly after Trump's election victory that he wasn't certain he'd fit into a Cabinet-style role. The discussion at that time centered on speculation that he might be selected to head the sprawling Department of Health and Human Services.

"Ben shares my optimism about the future of our country," Trump said, "and is part of ensuring that this is a presidency representing all Americans."

Carson would oversee a budget of nearly $50 billion that provides rental assistance for more than 5 million households. Demand for that assistance is high due to housing costs rising faster than incomes. HUD also promotes home ownership with the Federal Housing Administration underwriting about 1 in 6 mortgages issued in the U.S. The agency is also charged with enforcing federal fair housing laws.

House Democratic leader Nancy Pelosi said Carson has no credentials for the job and was a "disconcerting and disturbingly unqualified choice." She said the country deserves someone with "relevant experience to protect the rights of homeowners and renters."

Carson was among the 16 Republican candidates who challenged Trump for the Republican nomination. He was a favorite of religious conservatives and a strong fundraiser, but his team burned through money quickly and he failed to win any of the early primary contests.

Trump treated Carson harshly during the primary, saying he had a "pathological temper." Still, Carson quickly endorsed Trump after he dropped out of the contest.

As a Trump supporter, Carson was both loyal and critical. He conceded that Trump had "major defects" and said at one point that he would have preferred a scenario other than Trump winning the Republican primary.

On Monday, Trump continued to receive visitors to the New York skyscraper that bears his name. His most surprising guest was Gore, the former vice president who endorsed Trump's Democratic opponent, Hillary Clinton, in the campaign's stretch run. Transition officials said early Monday that Gore would meet with Trump's daughter, Ivanka, about climate change, which is the former vice president's signature issue.

But Gore said he also met with Trump directly and the two had a "very productive conversation."

"It was a sincere search for areas of common ground," said Gore, who did not detail what the men discussed. The president-elect has called manmade climate change a hoax and has pledged to undo a number of regulations designed to protect the environment.

Ohio Sen. Rob Portman, a Republican who declined to support Trump during the campaign, also visited the tower, telling reporters in the lobby he was there to discuss policy with senior aides and not meet with Trump.

Outside the building, Green Party presidential candidate Jill Stein vowed to forge forward with her push for a recount in three states -- Wisconsin, Michigan and Pennsylvania -- that helped Trump win.

But her news conference was repeatedly interrupted by shouts of protest. Several Trump supporters heckled the proceedings, and a disagreement broke out between attendees who were ostensibly on the same side. When one Green Party speaker who preceded Stein took repeated swipes at Clinton, several Democrats in the crowd tried to shout him down before they themselves were heckled by other Stein supporters.

Additionally, New York City Mayor Bill de Blasio announced that he's asking the federal government for $35 million to cover costs related to securing Trump, who has indicated he will largely work out of Trump Tower as he builds his government ahead of his inauguration.

Trump has now expanded his pool of candidates for secretary of state, raising a question about whether former CIA Director David Petraeus' guilty plea for leaking classified information disqualifies him.

Trump's aides had confirmed that the president-elect had settled on four finalists for the post. But over the weekend, two people close to the transition told The Associated Press that Trump is moving away from two of the four: former New York City Mayor Rudy Giuliani and Mitt Romney, the 2012 Republican presidential nominee.

That would leave Petraeus as a top contender, along with Tennessee Republican Sen. Bob Corker, chairman of the Senate Foreign Relations Committee. Both people close to the transition said Trump's prolonged decision-making process has left the door open to other options. Among other possibilities, one official says, is Jon Huntsman, a former Republican Utah governor who also served as the ambassador to China and speaks Mandarin.

The people close to the transition spoke on condition of anonymity because they were not authorized to discuss the private process publicly.