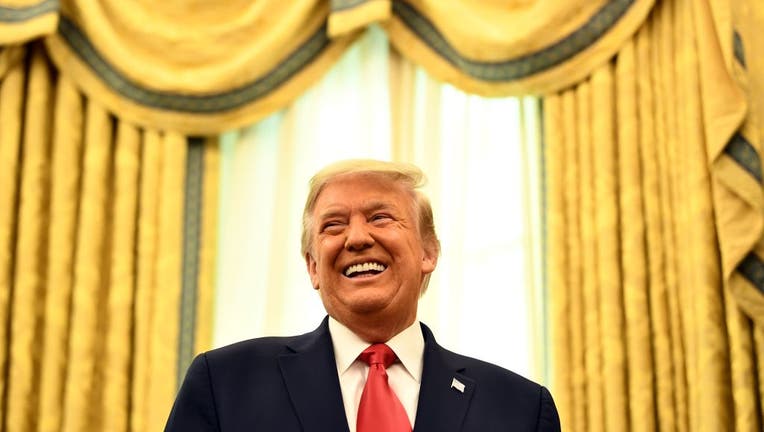 US President Donald Trump awards the Presidential Medal of Freedom to retired football coach Lou Holtz on December 3, 2020, in the Oval Office of the White House in Washington, DC. (Photo by BRENDAN SMIALOWSKI/AFP via Getty Images)

ATLANTA - Even after he exits the White House, President Donald Trump’s efforts to challenge the legitimacy of the election and seeking to overturn the will of voters could have staying power.

Trump’s tactics are already inspiring other candidates and have been embraced by a wide array of Republicans. Supporters include congressional candidates, state lawmakers, party chairs, conservative legal groups and appointees to previously little-known state vote-certification boards. The breadth of support for Trump’s effort could be a troubling sign for future elections.

“What this president is doing is poisoning democracy,” former Michigan Gov. Jennifer Granholm said. “And, yes, he is setting a precedent, suggesting that it is OK to violate these norms that have made our country great.”

Granholm, a Democrat, joined with former New Jersey Gov. Christine Todd Whitman, a Republican, to raise concerns about Trump’s refusal to concede and efforts to undermine the integrity of elections.

“This is not who we are as Americans, and we don’t want the public coming away from this thinking this is the norm,” said Whitman, who served in President George W. Bush’s administration.

Trump and his allies have pushed conspiracies involving voting machines manipulated by dead foreign leaders and tens of thousands of fraudulent mail ballots that somehow escaped layers of security and scrutiny by election workers across the country. They have filed lawsuits without evidence, tried to pressure state lawmakers into seating their own presidential electors and sought to influence low-level party members who sit on the state and local boards that certify election results.

This is despite the fact that the federal government’s own cybersecurity arm declared the presidential election “the most secure in American history,” and Attorney General William Barr said the Department of Justice uncovered no evidence that would change the outcome.

Even so, Trump has found friendly lawmakers and party officials willing to bolster his claims and adopt his tactics. On Friday, a group of 64 GOP lawmakers in Pennsylvania signed a statement urging Congress not to accept the state’s slate of electors for Democrat Joe Biden. They cited a litany of complaints over how the election was conducted.

“A number of people have shown themselves willing to go along or at least being perceived of going along instead of just condemning the entire operation,” said Wendy Weiser with the Brennan Center for Justice at New York University Law School. “It was not written off as it should have been.”

In recent days, lawmakers in battleground states have provided friendly forums for Trump allies to air their suspicions. A group of GOP state lawmakers in Arizona held an unofficial meeting where Trump’s lawyers repeated claims of irregularities with the state’s vote count but provided no evidence of widespread fraud. The chairwoman of the Arizona GOP asked a court to overturn Biden’s win in the state.

The effort then shifted to Michigan, where Trump lawyer Rudy Giuliani appeared at a four-hour legislative hearing to argue that fraud had occurred.

“Throughout this hearing, my colleagues continued to speak in circles about ‘getting to the bottom of this.’ But we’re already at the bottom, and there’s nothing down here,” said Michigan state Rep. Darrin Camilleri, a Democrat. “Down here at the bottom of all this, it’s just a dark, empty place.”

On Thursday, a legislative committee in Georgia received testimony from a Trump campaign attorney about purported irregularities despite a hand count and machine audit that revealed no major problems with the vote.

Election law experts say time will tell whether Trump’s approach and the support it has generated in the GOP represent a shift in how candidates handle defeat.

“Next time could be worse,” constitutional law expert Edward B. Foley warned in an op-ed last week while offering praise for the few Republicans willing to stand up to Trump.

Those included Georgia Secretary of State Brad Raffensperger, who certified his state’s election amid calls for his resignation from fellow Republicans and threats, and Aaron Van Langevelde, one of two Republicans on the Michigan board that certified that state’s results.

While the other Republican on the Michigan board abstained, Van Langevelde said he was required under state law to certify Biden’s win. The result, Foley noted, could have easily been different if other Republicans more open to Trump’s arguments had occupied those same positions.

“What makes this year’s narrow escape so unnerving is how far the plot to overthrow the election got with so little factual ammunition,” Foley said.

Others believe Trump’s behavior is more of a fluke and unlikely to result in any lasting damage to the electoral process.

“Everybody knows that it’s just because they lost,” said Pennsylvania Lt. Gov. John Fetterman, a Democrat. “There isn’t anyone from the president on down that genuinely believed that there was any real fraud. That’s what makes it so disingenuous.”

A few candidates have followed Trump’s lead, refusing to concede and seeking extraordinary measures to address their concerns.

A Pennsylvania congressional candidate who lost his race has yet to concede and signed on to a lawsuit challenging the validity of all mail ballots cast this year. A Republican candidate for U.S. Senate in Michigan called on the state to take the unprecedented step of delaying certification so an audit could be done — despite an extensive county canvassing process that did not find significant irregularities. He ultimately conceded.

Using the 2020 election as a springboard to create more trust in the process would help, said David Carroll, head of the democracy program at the Carter Center, founded by former President Jimmy Carter and his wife, Rosalynn.

That could involve requiring state and local election officials to be nonpartisan and appointed rather than elected by party, clarifying vague election laws, implementing federal standards for parts of the process and ensuring more training for election workers and volunteers.

“There was a lot of discussion before the election that the process might not be credible. Those are the things we see around the world where democracy is weak,” Carroll said. “It will be important for us to sit down as a nation and as a society and say we don’t want this to happen again. If we don’t, it’s likely that it could.”

Trump’s strategy, even if it fails, will probably still be an effective rallying tool for supporters, and it has generated at least $170 million in donations since Election Day. As Trump hints at running for president again, he will need his supporters to stay energized and on his side.

“I don’t think it’s going to go away,” said Democratic California Secretary of State Alex Padilla, “because I don’t think he is going away.”