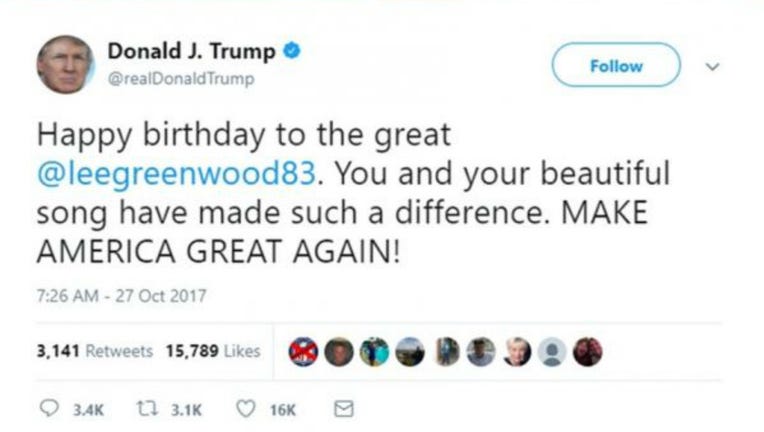 (FoxNews.com) - President Trump gave a Twitter shout out to Lee Greenwood, the singer and composer of "God Bless the USA," for his birthday Friday morning -- but he tagged the wrong Lee Greenwood.

"Happy birthday to the great @leegreenwood83. You and your beautiful song have made such a difference. MAKE AMERICA GREAT AGAIN!" the president wrote in an early morning tweet.

However, the Lee Greenwood he tagged was a New York-based lawyer.

"I get this a fair amount, but certainly not at this level," the lawyer wrote on Twitter soon after the president's message.

About an hour later, Trump deleted his original tweet and sent out a second one tagging the singer and composer.

"Happy birthday to the great @TheLeeGreenwood. You and your beautiful song have made such a difference. MAKE AMERICA GREAT AGAIN!" he wrote in the corrected tweet.

Greenwood (the singer) has not commented.

Josh Greenman, an opinion editor for the New York Daily News, said that Greenwood (the lawyer) had 146 followers before the president's tweet, to which he responded: "And I think half of them followed me after the inauguration concert..."